Just hours after Brodie Van Wagenen introduced his first acquisitions as the Mets’ general manager, his spotlight went out. A division rival stole it with a bold outlay of free-agent cash.

The Mets had welcomed second baseman Robinson Cano and closer Edwin Diaz to Citi Field on Tuesday after a seven-player trade with Seattle. But then the Washington Nationals struck, agreeing with the All-Star left-hander Patrick Corbin on the first nine-figure deal — six years, $140 million — of the current free-agent market. It was the kind of contract Van Wagenen craved in his former job as an agent, uniting a player with a contender at a price too rich for even the Yankees.

As Van Wagenen heads to Las Vegas for the winter meetings, which begin on Sunday, he finds himself in a role reversal: instead of asking for free-agent contracts, he will be trying to give them. Ownership provides his budget, of course, but Van Wagenen is now in position to live up to his strong words that jolted the industry last February.

Back then, as owners shrugged at a lackluster free-agent market for the 2018 season, Van Wagenen posted an angry Twitter missive. He was still an agent at that point and he warned that a “fight is brewing” over a market that “feels coordinated, rightly or wrongly.” Van Wagenen even threatened that a “boycott of spring training may be a starting point if behavior does not start to change,” a possibility the players union refuted two days later.

That post is deleted now, and Van Wagenen spoke with Commissioner Rob Manfred last month, smoothing over any hard feelings about the collusion charge. But while his new contemporaries — a young, analytically savvy group of general managers — have concluded that it is folly to lavish splashy contracts on players past their primes, Van Wagenen is not so sure.

“Everybody’s model and opinion on what future value is should vary and differ, and I hope ours is unique, because if it’s not, then we’re all chasing the same game plan,” he said. “I certainly didn’t take this job to follow the lead of others.”

With this winter’s free-agent market just starting to stir, we do not yet know how the Mets fit into it under Van Wagenen. Three of his lieutenants — Ruben Amaro Jr., Allard Baird and Omar Minaya — were general managers in the previous decade, when teams more eagerly invested in players over 30. Cano was not a free agent when the Mets obtained him, but he is 36 years old, is signed through 2023 and the Mets took on more than $60 million over all in the trade.

As an agent, Van Wagenen negotiated Cano’s 10-year, $240 deal with the Mariners in 2013 and in this trade sent Seattle two regrettable contracts the Mets agreed to last winter, with Jay Bruce and Anthony Swarzak. Those were just a few of the deals that supported the reluctance of most teams to spend a lot of money.

All four then underperformed in 2018, as did many others who signed late. Van Wagenen attributed it to timing. 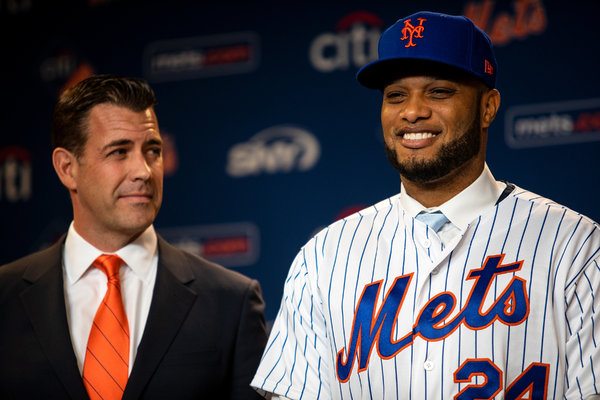 “I don’t think it’s ever a good thing to force a player into a circumstance where he can’t be successful,” he said. “And when you sign players late in the process and they don’t have a full spring training — or they don’t have the opportunity to have a clear idea of what their role and expectations are going to be with a new team — that hurts the individual, it hurts the teammates that player will join, and it certainly hurts the organization. My plan is not to bargain-shop in February and March. My plan is to be aggressive and strategic in filling our needs as soon as possible.”

Baird, a former Kansas City Royals general manager, worked for the Boston Red Sox last season and saw the impact of an exception to the free-agent flops. J.D. Martinez signed in late February (five years, $110 million) and hit .330 with 43 homers. He helped lead the Red Sox to the World Series, where David Price — who signed for seven years and $217 million with Boston in December 2015 — won the clincher.

Do the 2018 Red Sox, then, prove that aggressive free-agent spending may be a worthwhile gamble after all? Baird would not go that far.

“We can look at the other ones that didn’t turn out; we can surely look at that as well,” he said. “But I also learned in Boston that the culture has a huge impact on those players — the supporting cast, the resources that are around that individual during the bumps and the grind. So the infrastructure that you put those guys into is a really, really important element.”

The Mets’ intangibles will reveal themselves over time, but Amaro — a former Phillies general manager who returns to the front office after serving as the Mets’ first-base coach — said Van Wagenen was off to an encouraging start. He noted that, at the news conference for Cano and Diaz, Van Wagenen thanked numerous Mets staffers, including the scouts who signed the prospects the Mets had just traded.

The Mets do seem united in their goal of contending immediately. That belief, and the vision to execute it, helped Van Wagenen get the job.

“That was all part of the analysis when we looked at the different G.M. candidates, as far as what they thought,” said Jeff Wilpon, the Mets’ chief operating officer. “Some thought teardown, some didn’t think that we had enough. But Brodie being aggressive and knowing the landscape of New York and being comfortable here, he doesn’t seem like a rookie G.M. right now in terms of the way he’s acting. He wants to show this fan base that we can win and we can win now.”

The trick is where Van Wagenen goes from here, and how much Wilpon will give him to spend. The free-agent market teems with options, and seems to be an easier way to plug holes than through trades. The Mets already dealt three prospects to Seattle, and would rather keep the position players most appealing to other teams, like Michael Conforto, Brandon Nimmo and Amed Rosario.

Could they sign a catcher like Yasmani Grandal, Jonathan Lucroy, Wilson Ramos or Martin Maldonado? What about an outfielder like A.J. Pollock, Andrew McCutchen or Adam Jones? How about a reliever — Adam Ottavino, Andrew Miller, David Robertson — to set up for Diaz? (And there’s always the fantasy of Manny Machado or Bryce Harper …)

So here is Van Wagenen’s chance. If the industry really does undervalue free agents, as he asserted just 10 months ago, why not sign some and test out the theory? The Mets are not tanking, and for that they should be applauded. But their chosen path, and their market, demand that they invest heavily in available talent.

“The national sports landscape is better when the New York teams are successful — and that is for the Yankees, that’s for the Mets, that’s for the Knicks, the Nets, everybody in town,” Van Wagenen said. “I think that we are all better off, and sports is more compelling, if the New York teams are relevant. I want to be relevant, I hope the Yankees continue to be relevant, and I think the Mets owe it to this city and this fan base to try to win every year.”