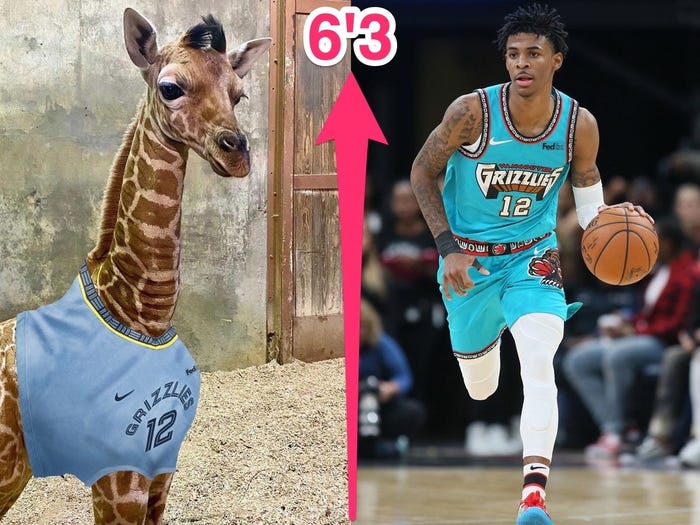 Ja Morant has a new namesake in Memphis.

The Memphis Zoo named its newest giraffe "Ja Raffe" in honor of the Grizzlies star. The calf — born less than two weeks ago — is already the same height as Morant at 6-foot-3, though the 2020 NBA Rookie of the Year still has a 34-pound edge over his new long-necked pal.

Zoo staff announced Ja Raffe's name with a cute video designed to mimic the tone of the lineup introductions at a typical basketball game. Clips of the calf flashed across the screen as an announcer referred to Ja Raffe as "the newest member of the Memphis Zoo roster" before listing his name, height, and weight.

Animal lovers in Tennessee weren't the only ones excited about Ja Raffe. Morant himself shared the zoo's video on Twitter Thursday and added, "welcome to the world 🙌 'ja'raffe 🦒." Later, the superstar guard penned another tweet in which he called the calf a "legend."

The Grizzlies social media team promptly gave the team's newest fan some new threads — or it did on social media, at least.

Just as Ja Morant clicked with his teammates in Memphis from the jump, Ja Raffe did also. He had the chance to meet his whole herd on Thursday and appeared to hit it off with his clan.

For all of these reasons — plus his enticing physicality — Ja Raffe is officially on the radar of Grizzlies team president Jason Wexler.