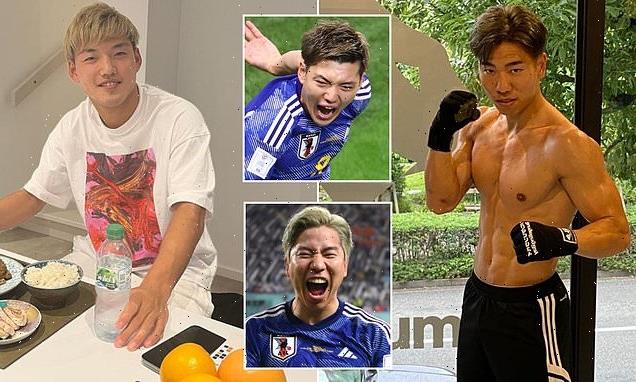 Japan’s stunning victory over Germany came courtesy of strikes from ‘the Japanese Messi’ and the forward nicknamed ‘Jaguar’ who used to be on Arsenal’s books… and both are now plying their trade in the Bundesliga!

Just over 24 hours after their Asian rivals Saudi Arabia claimed an historic victory over Argentina, Japan have emulated their counterparts and served a shock upset at the World Cup.

When it appeared that three points were assured for Germany after a first half penalty from Ilkay Gundogan, the Japanese had other ideas as Ritsu Doan and Takuma Asano bagged late strikes to down their Group F rivals.

The result has blown their group – containing Spain, Germany, Japan and Costa Rica – wide open, with many fans and pundits assuming that the two European heavyweights would be battling it out for first and second spot.

It also buys under-fire Japan coach Hajime Moriyasu some much-needed time, with reports before the tournament suggesting that the Japanese FA had made contact with Celtic coach Ange Postecoglou over the position. 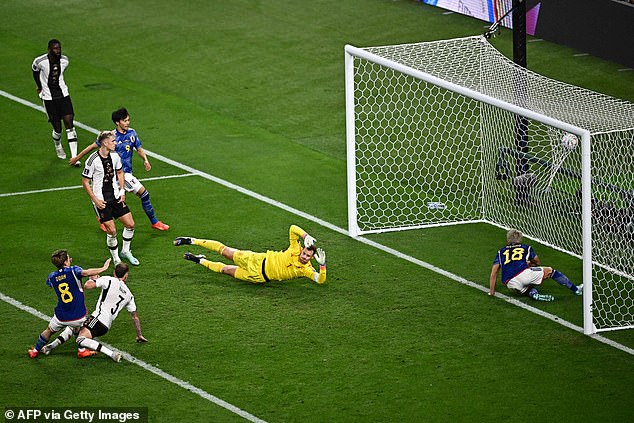 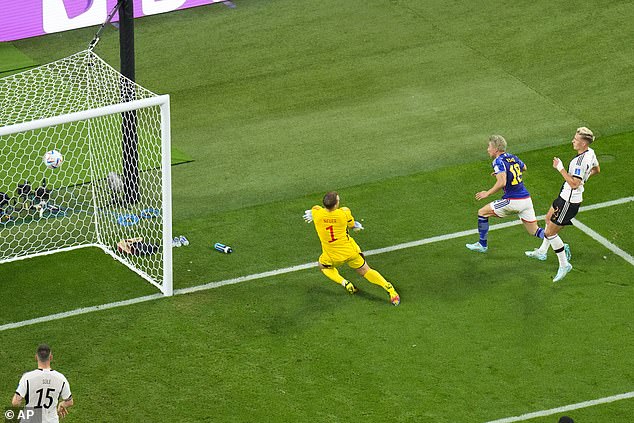 But what of the two heroes that netted the all-important goals? Well, one is dubbed the ‘Japanese Messi’ back home, while the other is known as ‘Jaguar’ and had previously been on Arsenal’s books.

Sportsmail takes a deep dive into Ritsu Doan and Takuma Asano after the pair etched their names in the history books.

The man who clawed Japan back into the game on the 75th minute, Ritsu Doan was in the right place at the right time to finish after Manuel Neuer parried an effort straight into his direction.

But it will come as no surprise to fans of Japanese football that the 24-year-old was ready to pounce.

Doan started out at Gamba Osaka and, after winning Young Asian Footballer of the Year in 2016, was quickly snapped up by Dutch side Gronigen. His 15 goals in 63 games caught the eye of Eredivisie giants PSV, who landed the attacker in 2019. 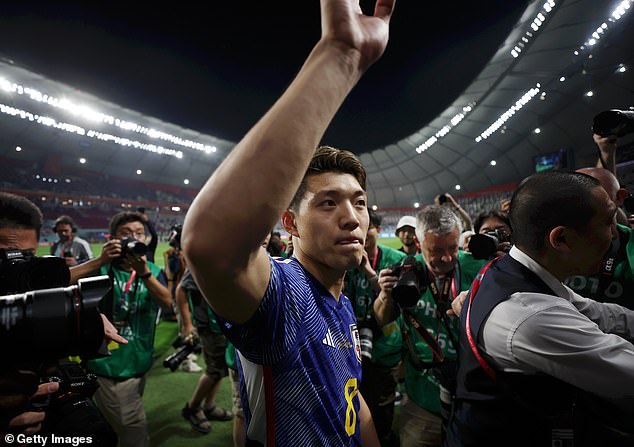 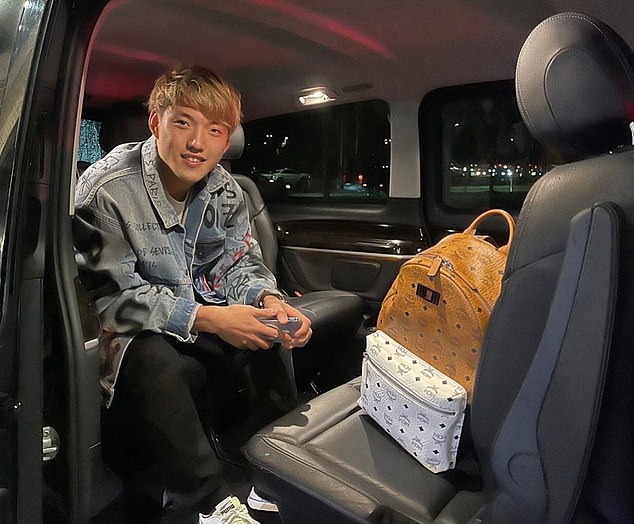 During his stint with PSV, Doan – who is nicknamed ‘the Japanese Messi’ due to his superb dribbling skills – was sent on loan to Arminia Bielefeld and it was during his time with the German outfit that he first scored past Neuer in a defeat to Bayern Munich.

Doan is already a huge star in Japan, and featured alongside England star Bukayo Saka in Beats’ Defy the Noise campaign.

Yet despite the lucrative sponsorship deals and building a successful career in Europe – he joined Bundesliga outfit Freiburg in the summer – Doan has huge aspirations to reach the very top.

‘If I were to say I’m happy, that would mean I’m playing for Manchester United, Real Madrid or Barcelona,’ he told ESPN in August. ‘That was my dream when I was young. So the bad thing is that I’m not happy but the good thing is that, because I’m never happy, I want to become better and better all the time. 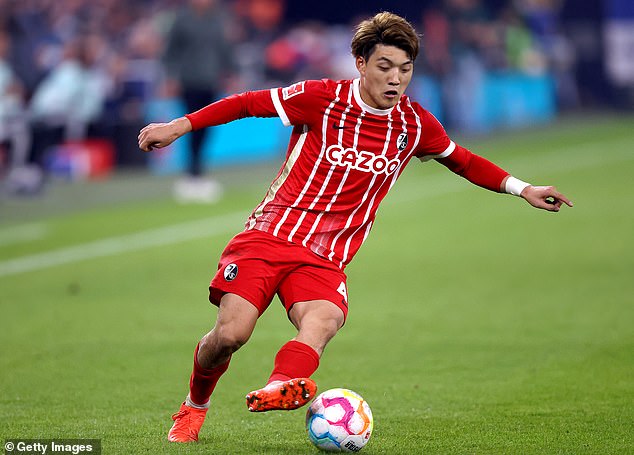 ‘It’s a bit strange that I’m still 24 but I’ve already had five clubs but I can honestly say they are all great clubs — Gamba Osaka, Groningen, PSV, Bielefeld, now I’m very happy to play for Freiburg.

‘But if everything is going well, I should be playing at a bigger club. That’s why I’m not satisfied.’

If he continues to perform as he did against the Germans, it won’t be long before big clubs come knocking.

When Arsene Wenger tipped him for stardom, Takuma Asano surely didn’t think he would have to wait until he hit the age of 28 before he was recognised on the world stage.

But with a touch and finish like the one he executed for Japan’s winner, there can be little doubt that the Bochum star has propelled himself into superstardom.

Receiving the ball from deep on the right, Asano brought it down expertly, held off his man before firing into the roof of the net from a tight angle.

Known as the ‘Japanese Jaguar’ for his rapid pace and how he hunts the ball, Asano has welcomed his nickname with open arms and has been known to imitate the animal when he celebrates goals. 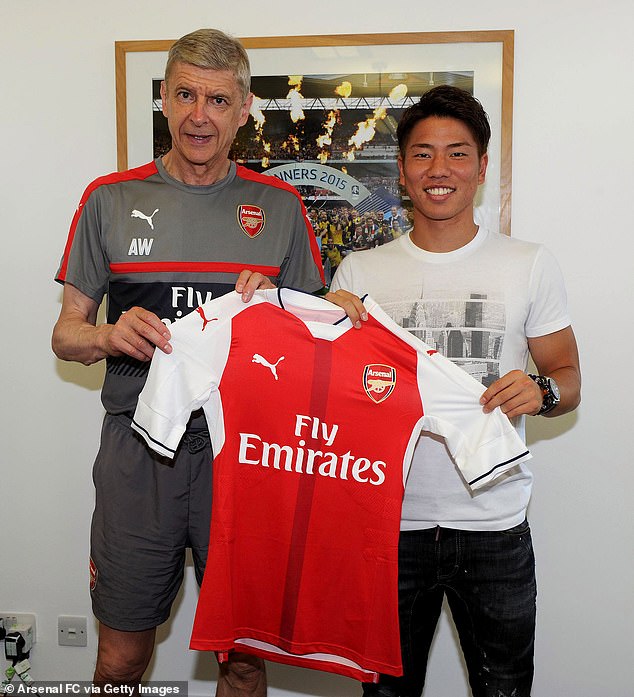 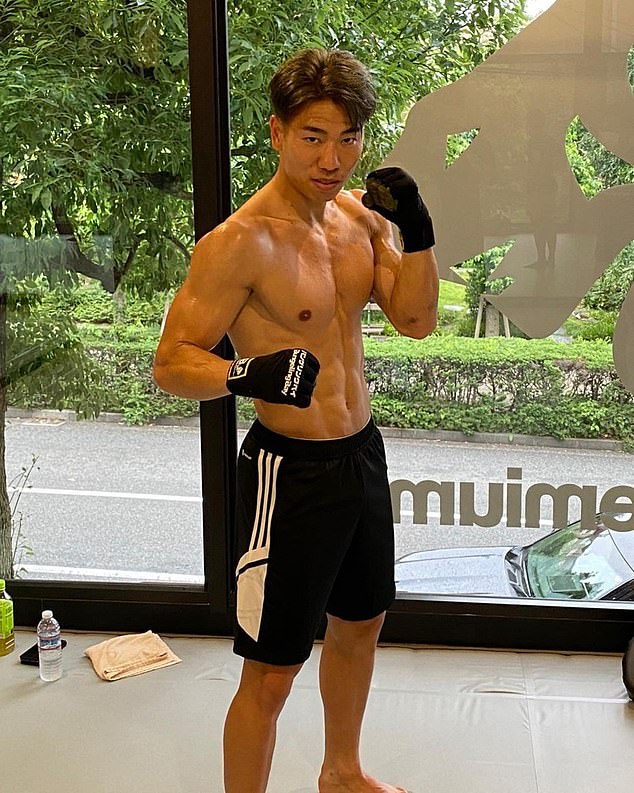 He is known as the Jaguar for his intensity and speed, and is a combative player up front

There were, however, serious doubts that Asano would even make it to Qatar this year. Back in September, the attacker was ruled out for a number of weeks owing to a knee ligament tear, but made an incredible recovery to feature in Moriyasu’s squad.

Curiously enough, Arsenal fans will be very familiar with Asano. The 28-year-old spent three years on the club’s books after signing in July 2016, and Wenger labelled him as ‘a talented young striker and very much one for the future’.

After Japan’s shock win over Germany, photos of Asano with the legendary French manager swiftly circulated on social media.

However, due to a work permit issue, Asano never played a game for the Gunners.

Instead, he spent two years on loan at Stuttgart, another temporary spell with Hannover before finding a permanent home with Partizan. Despite scoring 22 goals in 56 games, the Serbians opted not to renew his contract and he returned to Germany, signing for Bochum on a free transfer.

In fact, Asano was aggravated by Partizan’s treatment of him. An official statement on his website read: ‘After struggling for some time, I have no other choice but to come to this difficult decision because I do not feel respected by the club.

‘The club has continuously failed to pay my salary and expenses on time (to date, there is still a significant amount outstanding) and has been less than straightforward in their response to my repeated demands.

‘It pains me to have to leave the club under these unfortunate circumstances, because FK Partizan was an important club in my playing career.’

Spare a thought for board members at Partizan who opted not to keep hold of the striker, who will undoubtedly have a few suitors after that performance.