After a 4-12 season, the Jets were expected to overhaul their staff. But few expected the team to land perhaps the most controversial figure in the N.F.L. coaching ranks.

Enter Gregg Williams, the Jets’ new defensive coordinator, whose credentials include a Super Bowl ring with the New Orleans Saints in 2009; a surprisingly positive run as the interim coach of the Cleveland Browns this season; and, not to be forgotten, a role as the face of one of the ugliest scandals to tarnish the image of the N.F.L. in the last decade.

For the Jets, mired in one of their trademark periods of borderline irrelevance, he has been brought in to reform an undisciplined defense and counterbalance Adam Gase, the newly hired coach, who at 40 is one of the league’s youngest, most innovative offensive minds.

Williams’s reputation as a firebrand, however, carries significant risks for a franchise frequently plagued by off-field distraction.

Williams was at the heart of the scandal known as Bountygate, in which the Saints, with Williams as ringleader, offered payouts to players who injured opponents, according to a league investigation. The scandal resulted in plenty of hand-wringing over the sport’s relationship with brutality when it was trying to convince the public that it was taking seriously the mounting concerns about head injuries.

In March 2012, Williams received an indefinite suspension, the harshest of the penalties doled out, which included a one-year suspension for Saints Coach Sean Payton. Williams was reinstated in 2013.

In the years since, Williams, 60, has worked his way back into the defensive coordinator role seemingly without having lost much of his brashness or bravado. On HBO’s “Hard Knocks: Training Camp with the Cleveland Browns” this past summer, Williams became something of a celebrity among Browns supporters, who took to his intensity and vulgar tirades. Williams liked to end defensive huddles with the phrase, “Come get some.”

“He’s not here to make you feel comfortable,” said the former linebacker Jo-Lonn Dunbar, who played for Williams in New Orleans and St. Louis. “He’s willing to ruffle your feathers.”

Williams is indeed a throwback to the era of football coach as force of nature. Gase’s introduction to the Jets was judged by some as notably subdued. But Williams thunders into a locker room like a gale.

In Cleveland, where he was defensive coordinator for two seasons, he warned parents about bringing young children to training camp because of his propensity to yell obscenities. He admonished reporters for slouching in chairs. He trash-talked the matinee-idol quarterback Baker Mayfield.

Dunbar said practices were intensified by Williams’s insistence that any loose ball be treated like a turnover, at all times.

Dunbar added that players eventually became “conditioned to go after the ball.”

It strikes some as just the sort of Type A personality that can light a fire under the Jets, who struggled under Coach Todd Bowles. 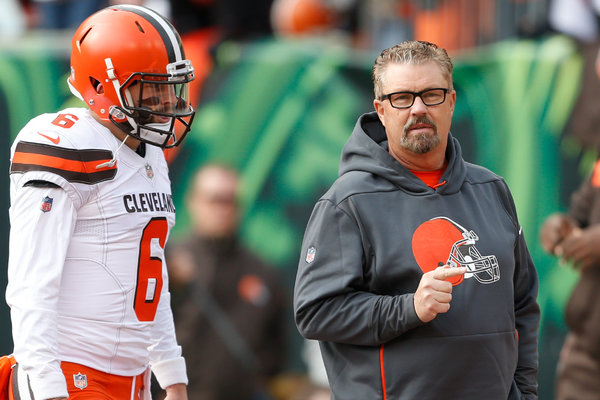 “They need a guy that can come and crack the whip — teach them football but also be very demanding,” said Bart Scott, a former Jets linebacker who is now a co-host of “The CMB Show” on WFAN. “He can teach them and give them the tools to be successful in different situations.”

The Jets have declined to make Williams available for interviews until after Gase’s full staff has been assembled. Gase also hired Dowell Loggains from the Miami Dolphins to be offensive coordinator, and kept the special-teams coordinator Brant Boyer.

In a recent interview on a Pro Football Talk podcast, Gase said he had known Williams for more than a decade.

“He did his time,” Gase said of Williams and the scandal in New Orleans. “He’s gotten a second chance, he’s done it right, he’s gone and worked extremely hard to do things the right way, and for me or anybody else to hold that over his head, to me, is wrong.”

Many Jets players expressed enthusiasm after Williams was hired. Safety Jamal Adams, at the Pro Bowl in Orlando, said he had already been watching videos of Williams’s teams on YouTube.

“He’s the best in the business,” Adams said. “I’ve had so many players hit me up to tell me how much I’m going to love Coach Gregg.”

One former player who may not share such sentiments is Peyton Manning, who recommended Gase, his former offensive coordinator in Denver, to the Jets. Williams once told a Nashville radio station that he wanted his defenders to put “remember me” hits on Manning, then the quarterback for the Indianapolis Colts.

Williams will probably bring at least one significant change to the defensive scheme. The Jets have used a 3-4 (three down linemen, four linebackers) base defense since Eric Mangini arrived in 2006. But Williams is known for his 4-3 format, which emphasizes speed rushers on the outside, something the Jets do not exactly have right now.

The team does have more than $100 million in cap space, so there should be flexibility to acquire a defensive end or two to fit Williams’s vision, which relies on the blitz.

The Jets tried this approach under Rex Ryan, who took them to two consecutive A.F.C. championship games. It worked until it didn’t. Ryan coached the Jets for six years and was fired after the 2014 season, when he went too 4-12.

Williams’s demanding personality will be an adjustment for some players. Dunbar said another difficulty is how much information he throws at his players so they understand more than just their role in the defense — he wants them to know the whole orchestra, not just its parts.

“He wants his players to be more like coaches on the field than just robotic players,” Dunbar said. “He wants them to play with instinct and be able to call what they feel.”

To Scott, that is the type of coach the Jets need, controversy aside.

“He was the best hire available,” Scott said. “You have talented pieces. They just don’t know how to be great.”