Summer 2020 will see the launch of The Hundred – an action-packed and unmissable new cricket competition taking place across England and Wales.

This is cricket as you’ve never seen it before. One hundred balls, seven cities and eight teams, featuring some of the best players in the world – and every game will be live on Sky Sports.

History will be made on Sunday night with the UK’s first-ever cricket-player draft, when you will be able to see which of the world’s best players will be picked to join the men’s squads for the eight new teams.

There will be a host of big names live on the night as we look ahead to the new competition and look back on an amazing summer of cricket.

Here’s how it will work…

During the first stage of selection, which took place on October 3, each team picked at least one England red ball-contracted player and two ‘Local Icon’ players.

The remaining places in the squads will be filled through the full draft on Sunday, which will feature seven rounds of two picks each.

There are seven salary bands, ranging from £125k to £30k and teams can pick two players from each salary band. 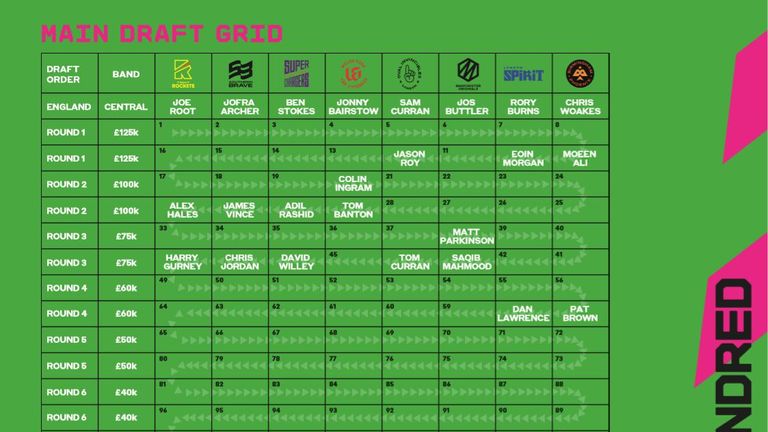 Trent Rockets will pick first, then Southern Brave second and so on. Each team have 100 seconds to pick.

Where an ‘icon’ has been picked, the team skip that turn in the draft.

A player will take no further part in the draft if not picked in their preferred salary band.

Naga Munchetty says she ‘embraces’ her age Naga, 45, kicked off her radio show by discussing the devastating effect of...