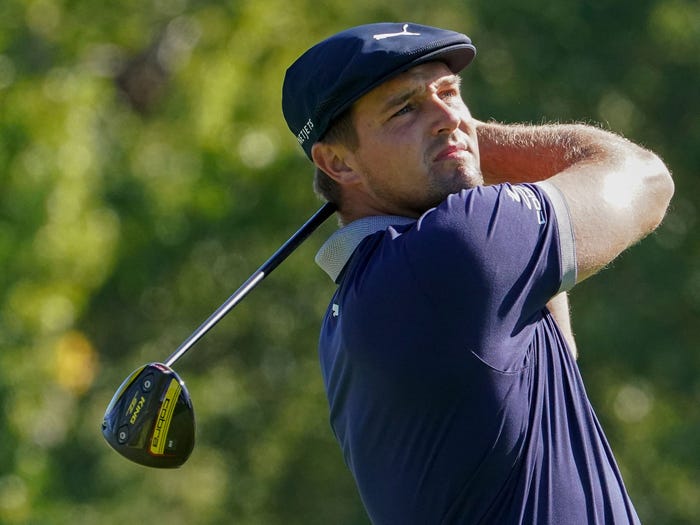 This Thursday, golf fans worldwide will turn their attention to Augusta National to take in the most celebrated tournament in the sport: the Masters.

It is, as Jim Nantz has so often put it, "A tradition unlike any other," filled with incredible views and even more spectacular golf. This year, there's plenty of compelling players to cheer for — Tiger Woods is looking to defend his green jacket, Rory McIlroy is hoping to complete his career grand slam, and Bryson DeChambeau is continuing his mission to break the sport of golf completely.

Take a look below and see who Las Vegas believes has the best chance to win at the Masters this weekend, as well as some interesting sleeper picks and longshots further down the odds sheet. If you are a casual bettor looking for some action on the tournament, my advice would be to pick a player or two from each bracket, put down a few dollars, and hope for the best.

All lines are courtesy of the Westgate Las Vegas Superbook.

One thing to know: Bryson DeChambeau is the biggest story of the Masters and with good reason. After completely rebuilding his body over quarantine, DeChambeau is hitting the ball harder and further than anyone else in the sport. His massive drives will give him a distinct advantage over the field in that many of the fairway hazards that make Augusta National such a notorious challenge simply won't apply to him — his drives will fly right over them.

Nobody wins the Masters without a brilliant weekend, and DeChambeau still will have to string together four great rounds, but the favorite is a favorite for a reason.

One thing to know: McIlroy is still a green jacket shy of the career grand slam, but there's good reason to think this could be his year. He's been in solid form since returning to the Tour after the birth of his first child and has finished in the Top 10 at the Masters in five of the past six years.

One thing to know: Jon Rahm is the best player on tour without a major win, but that could change this weekend. Rahm has a complete game and is already putting together career highlight reel shots in his practice rounds at Augusta National. At the very least, he should be in contention on Sunday.

One thing to know: He's the best golfer in the world for a reason. Dustin Johnson has a complete game and can take on any challenge that Augusta National throws at him. He's finished in the Top 10 at the Masters in four of the past five years, including tying for second in 2019.

One thing to know: While he's not in great form heading into the Masters, Tiger Woods can never be counted out at Augusta National.

One thing to know: Xander Schauffele is another player that many have pegged as the next great major champion. Just 27 years old, he's already finished in the top 10 seven times at majors through just four seasons of play.

One thing to know: It's tough to consider Jordan Spieth a sleeper at his best course, but his game has been extremely off-kilter over the past few months. There's a chance he nosedives again this weekend, but if there is any place where he would put it all together and refind his game, it's at Augusta National.

One thing to know: Tommy Fleetwood is another all-around player that could contend at Augusta National if things break his way, especially if the weather gets dicey.

One thing to know: Tony Finau has all of the tools. He can smack the ball off the tee, has a delicate touch with his irons, and is a solid putter on the right week. This is only his third time playing the Masters, having finished T10 in 2018 and T5 in 2019.

One thing to know: While he's never played the Masters before, Abraham Ancer has a style of play that could be well-suited for the tournament. He's a longshot to win, but he could be a solid pick for anyone putting together a daily fantasy lineup for the tournament.

One thing to know: Tyrrell Hatton has been in superb form of late, with one win and two more top-10 finishes in his past four starts. While he's struggled at the Masters in the past, if he can keep his momentum going, he could be contending on Sunday.

One thing to know: Brendon Todd is one of the best stories in golf this season, having rejuvenated his career with a slew of solid finishes over the summer. While he hasn't been great at putting together four rounds to win, he could be an interesting play to be an early tournament leader.

One thing to know: Scottie Scheffler has impressed all season, contending in tournament after tournament at just 24 years old. While it's going to be his very first time playing the Masters, he's not afraid to shoot with the best in the sport.

One thing to know: Sebastian Munoz has been playing well of late, having finished T14 at the Zozo Championship just a few weeks ago. He's an interesting pick for daily fantasy players, as well as for make-the-cut bets, but at 500/1, why not throw a few bucks on him to win as well just in case.

Obviously, there are too many players listed here to bet every single one of them, but take these brackets as guideposts. The favorites are the favorites for a reason, and those listed as sleepers or longshots are players that I see as undervalued.

As for my picks, I will have the most money invested in Bryson. Betting the favorite is usually not the best strategy in a sport as chaotic as golf, but his driving ability is other-worldly. It should be like nothing Augusta National has ever seen before. He's too compelling to turn away from, and if he has my attention, he has my money.

I'm also betting Tony Finau because he has all of the tools and just needs to string it together — he's so talented, he's not a player you're going to find at that short of a price for many more majors in his career.

I have small bets on Tommy Fleetwood and Rickie Fowler because they are my two favorite players, and I bet them every tournament. I have also placed $5 bets on every player I wrote about here listed at 100/1 or longer because if I wrote about them and they went on to win, and I didn't cash a ticket, I would throw my computer into a river.