WEST POINT, N.Y. — Nearly four years later, Kenneth Brinson is still awed with the memory of his first moments at the United States Military Academy. He was herded into Eisenhower Hall along with the rest of the soon-to-be-plebes. He was welcomed briefly by a member West Point’s military command and told of his mission.

Then an upper-class cadet stepped forward. “You have 90 seconds to say goodbye,” he directed.

By the time Brinson scrambled to give his mother, Lucretia, a farewell hug, he was four minutes into 47 months of becoming — hopefully — a second lieutenant in the United States Army. By the end of that June day, Brinson had a buzz cut and a rhythm for precision marching. “They call it inculcating you with West Point values,” he said of those first hours at the academy, “and it was like — bam! — you start right now.”

By the end of the summer, Brinson knew how to handle a weapon, the importance of the chain of command and, most important, that he was where he was supposed to be. Some classmates fell out; others were run down physically and drowning in their academics.

Not Brinson. By the end of his first semester, he was at the top of his class. He was even hopeful about the prospects for Army football. He and his teammates had finished 2-10 that first season and had lost to archrival Navy for a 14th consecutive year, but Brinson saw better days ahead.

“We were a young team, and I knew how hard we were working,” said Brinson, now a 6-foot-2, 245-pound senior linebacker preparing for Saturday, which will be his fourth Army-Navy game. “We were putting in the extra time, and we liked each other. I thought we were going to be very good.”

Brinson was right. He and a senior-laden team have reversed two decades of frustration to help return a proud Black Knights program to the national college football conversation. Army heads into its 119th meeting with Navy with a record of 9-2 and a chance to beat the Midshipmen for a third year in a row.

The Black Knights accepted an invitation to the Armed Forces Bowl to play Houston (8-3). Even better, Army has returned to the national rankings for the first time since 1996: It is No. 22 in the current Associated Press poll and No. 25 in the USA Today coaches poll.

For the past four years, Brinson has been near the middle of it all as a leader on a defense that ranks 11th nationally and is the primary beneficiary of Army’s ground-chewing, clock-eating offense. Brinson’s most impressive statistics may have come off the field: He excels in the classroom — he has maintained a 3.96 grade point average in chemical engineering and hopes to attend medical school — and even in his other sport. (He may have only two football games remaining in his Army career, but his track and field days will continue in the spring. Brinson is a thrower: shot put, discus and hammer.)

“He is different from anyone I’ve ever had,” Army Coach Jeff Monken said. “He excels at a high level at everything he does, not only because he is talented and really bright, but he stays focused on what is in front of him.” 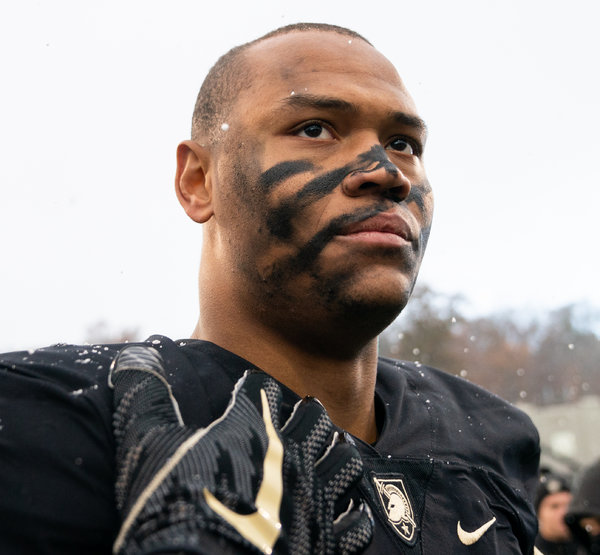 Monken saw the same things Brinson did throughout that 2-10 finish in 2015: a group of freshmen who bought into the second-year coach’s mantra that “winning is hard,” but if you put the extra time in on the little things — film, fundamentals, focus — it gets easier. Even with 21 freshmen starting, seven of Army’s 10 losses that season were by 7 points or less. Two came on last-second field goals.

The next year, Army went 8-5 and ended a 14-game losing streak against Navy with a 21-17 victory that both Brinson and Monken say was nothing less than cathartic.

“Indescribable,” Brinson said of “singing second,” the privilege that lets the game’s victors sing their alma mater along with the Corps of Cadets and Army officers and troops at the game.

“There was so much talk about the streak,” Monken said. “It was hard not to feel the weight of that on our shoulders. The team felt such a responsibility to put an end to it.”

Last year, Army dispatched Navy, 14-13, and then won a shootout with San Diego State, 42-35, in the Armed Forces Bowl to finish 10-3. Neither Brinson nor Monken is looking past a Navy team in a rivalry that members of each military institution say transcends records or bowl invitations.

“One game changes everything,” said Navy Coach Ken Niumatalolo, whose Midshipmen are 3-9. “We have amnesia when it comes to what’s happened in the past.”

But this Army team did take Oklahoma, a college football playoff team, to overtime in Norman, Okla., earlier this season before losing, 28-21.

A win over Navy and Houston would give Army 11 victories for the first time in its history.

“I’d like the seniors to have that legacy to leave for the guys following them, and to the chance to be able to say they went 3-1 in this series,” Monken said.

And Brinson? He wants to win, too, but lately he has found himself appreciating the people who have helped him succeed.

He will have longer than 90 seconds to say goodbye. One mission may be nearing an end, he said, but another awaits.

“My support system here has been great — in the corps, the classroom and my coaches and teammates,” Brinson said. “I’ve been trying to tell all those people that. There’s a million things I’m going to miss about it, but it is time to move on. It’s that time.”