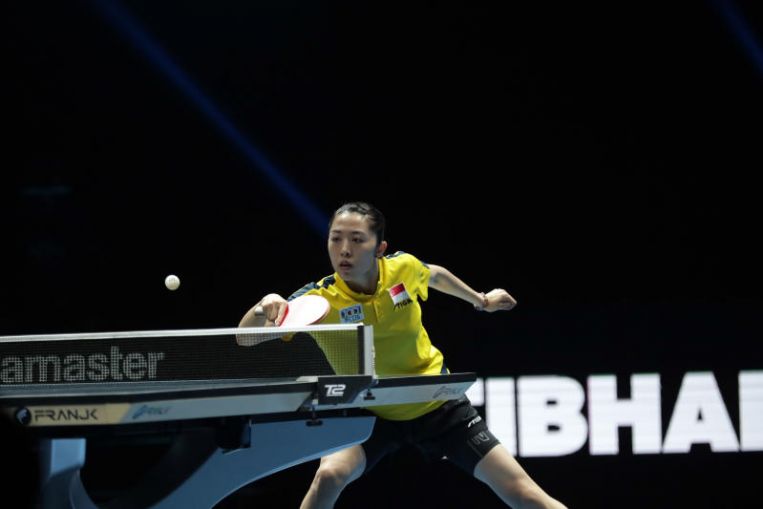 SINGAPORE – Nursing a chronic back injury and having missed a full year of international tournaments due to the coronavirus pandemic, national paddler Yu Mengyu returned with a bang as she reeled off four straight 3-0 victories to make it to the last 16 of the US$200,000 (S$266,000) WTT Contender Doha.

Yu showed good tenacity to save three game points against world No. 73 Zeng in the first frame and was the more consistent of the two.

Yu told The Straits Times: “Zeng Jian and I beat each other during national team training and we are very familiar with each other’s game. My back issue will always be there, but I have been receiving adequate treatment while playing in the Japanese T-League, as well as here in Doha. Playing in Japan has also helped me maintain my match fitness.”

Representing Nissay Red Elf has also allowed the 31-year-old to get to know club teammate Miu more, although they have yet to face each other since 2018.

Yu trails their career head-to-head meetings 2-3 but is hoping to build on her momentum.

“This will be a good test ahead of the Olympics in July, and I hope to be able to continue this good run and apply the things we have worked on in training,” she said.

National women’s team head coach Hao Anlin was relatively pleased with his players’ performances at this event so far.

He said: “I think it’s normal to feel excited and nervous, and given the circumstances, I think our players did well.

“Mengyu has performed as we expected. Both Lin Ye and her have kept their match fitness by playing in the T-League, they executed well in their respective singles matches and hopefully they will combine well in the women’s doubles.

“Zeng Jian was more settled after her first qualifying match and got used to some new strategies. Despite not being entirely fluid, I felt she levelled up here.”

At the 2015 SEA Games, world No. 12 Feng also lost to Sawettabut, who went on to win the women’s singles gold.