The timing of Saturday night's derby could not be any better for Sydney FC who are itching to bounce back from a disappointing defeat last weekend by beating cross-town rivals Western Sydney Wanderers.

As soon as the Sky Blues had finished their video analysis session reviewing Saturday’s lacklustre 3-1 home defeat to Wellington Phoenix on Monday morning, their attention turned towards the ANZ Stadium clash. 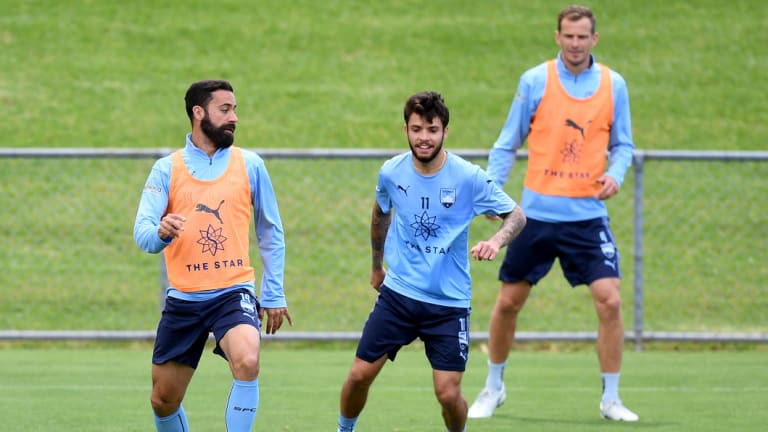 Results have varied and their performances have grown inconsistent but those struggles are out of sight and out of mind for Sydney's captain Alex Brosque in a week where claiming three points is all that matters. The Sky Blues have lost two of their past three and were far from their best in the one game they won in that period but Sydney's captain warns their bitter rivals should beware the wounded beast.

"You can already feel it. Once our video was done, our focused turned straight to the Wanderers. Already that energy comes back in and the session even today lifted a lot knowing what sort of game we’ve got this week," Brosque said.

"If anything, a loss like last week makes us all that more dangerous because we’re a team that doesn’t like to lose and we bounce back very well after a loss. It is the perfect game to kick us back into gear and get us going again."

While their form has experienced a drop in recent weeks, Brosque is buoyed by their historical dominance in the derby. The Sky Blues have won 10, drawn four and lost just one of their past 15 games against the Wanderers.

"It’s a game we’re always up for,” Brosque said. “We’re always well prepared, we always know what’s at sake whether it’s home or away. We know how much this game means to the club, to our fans and to us players as well. It’s a big game, derbies are big all over the world and here it’s no different. These games are massive and we understands exactly what it’s about.”

Brosque says defence is the key to Sydney FC continuing their impressive derby run, identifying concentration as a factor in the heavy loss to Wellington.

"We literally have not been punished like that before and it was one of those games. All over the park, from the front to the back, defensively we were off on a couple of moments and we were punished for them and it’s been a couple of weeks in a row now," Brosque said. "It’s about going back to what we know how to do, attitude adjustments in defence from a team point of view to make sure we fix that quick."