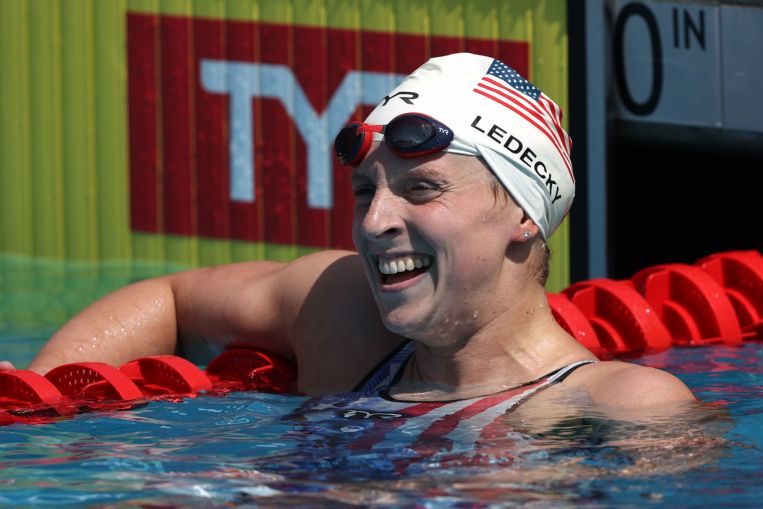 LOS ANGELES (AFP) – Katie Ledecky continued her build-up to the Tokyo Olympics with a 400m freestyle victory at the Mission Viejo Pro Swim Series in 3min 59.25sec on Saturday (April 10).

The American star, who won the 200m free on Friday in a world-leading 1:54.40, notched the 20th career performance under the four-minute mark.

“It’s always good to get under four,” she said. “That one probably didn’t feel as good as some of my other swims this week so far, but I’m more than happy with the time.”

Gonzalez powered home with a strong second 50m, but settled for second in 53.76 ahead of his University of California teammate Carr (53.83).

Unlike some of the elite swimmers finding the morning finals – instituted for this meet to mimic the Tokyo Olympic schedule – strange, Murphy said he enjoyed it.

“I wish every meet was morning finals,” Murphy said, adding that it suited his impatient nature. “It’s nice to just get up and do it.”

Olivia Smoliga won the women’s 100m back, overtaking Kathleen Baker on the second lap to win in 59.04 – the fourth best time in the world this year. Baker was second in 59.50.

In the women’s 200m butterfly, it was 17-year-old Katie Crom powering late past Lillie Nordmann and Katie Drabot to win in 2:10.38.

Drabot led at the halfway stage only to be overtaken by Nordmann, but neither could answer Crom’s late charge.

Fratus’ times put him inside the Olympic qualifying standard, but the 31-year-old, a two-time Olympian and a two-time 50m free world championships silver medallist, is not assured of a 50m free Tokyo berth just yet.

With the coronavirus still raging, the Brazilian swimming federation designated the California meet as a selection chance for Fratus, who lives and trains in Florida and now will not have to travel home for trials in two weeks. But he will have to await the results from the Brazilian trials to know for sure if he has punched his ticket to the Tokyo Games.

“It was a little bit of short notice,” he said of the federation decision, which prompted a hurried taper from heavy training and a shave-down for a meet that was not originally set to figure so prominently in his schedule.

“I think it was all right – 21.7 last night, 21.8 this morning. After all the Covid crisis, quarantine, having the pool shut down, I think it’s a good result.

“Now (I) just hope nobody swims faster than that at home in two weeks.”