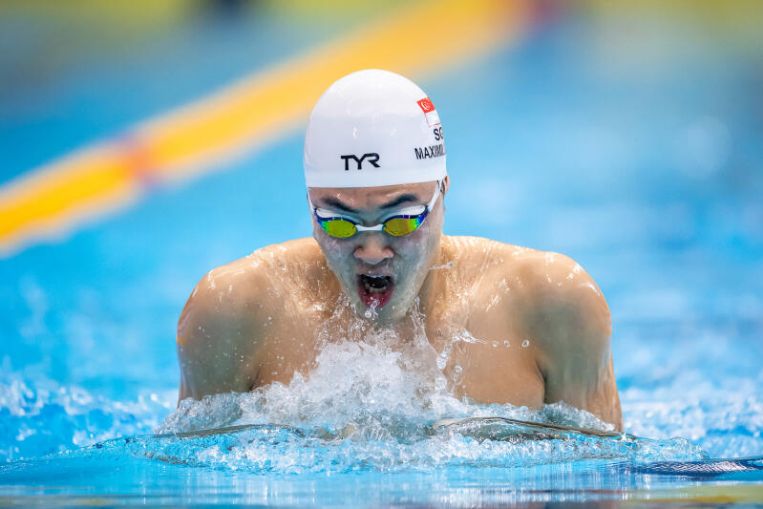 SINGAPORE – Despite feeling drained from days of racing and experiencing minor cramps in his thigh, Maximillian Ang still managed to rewrite his own national record in the men’s 200m breaststroke at the Singapore National Age Group Swimming Championships Major Games Qualifier on Saturday (March 20).

The 20-year-old, whose previous record of 2min 13.96sec was set at the 2019 SEA Games, touched the wall first in 2:13.68. He booked himself a spot in the year-end Hanoi Games with the time also meeting the Olympic Games ‘B’ qualifying mark.

But racing under less than ideal body conditions at the OCBC Aquatic Centre left him unsatisfied with his performance.

He said: ” When I touched the wall and saw the timing, I felt that I could have done a lot better and clocked a faster time.

“But I am still really happy since it is always good to break a national record. It was not up to my expectations but small improvements matter.

“Eventually I will (be able to) achieve my goal.”

Ang has his sights set on the gold medal at the SEA Games in Hanoi, after his previous effort in 2019 saw him settle for the bronze.

He said: “From now till the SEA Games, I will be training hard and looking to improve my fitness. It’s the small things like analysing my races to see how I can go faster, and taking in feedback from my coach . No matter what, I’ll just try my best.”

Also managing to clock a personal best was Teong Tzen Wei, who shaved 0.09 second from his previous time in the men’s 50m butterfly final.

He said: “The race today showed me that I can go faster. Sometimes, it is not really about the position that you get but of self-improvement and becoming the best version of yourself you can meet… I was quite pleased to see that I managed to better my time from my previous performance in 2019.”

Teong had been hoping to qualify for the Tokyo Olympics through the 100m fly on Friday (March 19), but his time was only good enough for the ‘B’ cut. However, he remains hopeful, and “should all the stars align”, he plans to give it another shot on Sunday (March 21) in the 50m freestyle.

He added: “Looking forward, we still have the Singapore National Swimming Championships in June, so I have another shot at the same events. I am just looking to learn from these few races and take it into the next two months of training and hopefully do better there.”

Saturday’s meet also saw Quah Ting Wen and Christie Chue securing their places at the Hanoi Games in the women’s 50m fly and women’s 200m breast respectively. Both finished first in their events, with Quah clocking 27.07sec and Chue 2:30.44.

The five-day meet – sponsored by Liberty Insurance – concludes on Sunday.