Netball fans across Australia were treated to a double-header of NSW and Victoria rivalry on Tuesday night, with the Swifts and the Vixens cementing the top two spots on the Super Netball ladder.

The frontrunning Vixens dismantled the Giants 73-53 with their one-point game skill before the Swifts got one back for NSW by defeating Collingwood 54-69.

Since round one, the Vixens have been confident in their abilities under the post and have mostly steered clear of the controversial two-point shot. Credit:Getty

No Housby, no worries for Swifts

In the later game, Collingwood walked on to the court eager to take advantage of a depleted Swifts side with star shooter Helen Housby out due to injury.

The England international corked her left calf during the Swifts' round-eight loss against the Vixens, with coach Briony Akle not willing to risk further injury to her star against the bottom-placed Magpies.

“The shortened nature of the season means there is a huge amount of load on the players’ bodies and I don’t think any team will get through these few months unscathed," Akle said ahead of the game.

Luckily, the firepower of Sam Wallace made up for the loss of Housby and resulted in an early quarter-time lead for the Swifts 20-13. 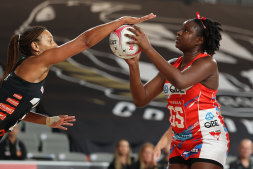 Sam Wallace stepped up in the absence of Helen Housby for the Swifts on Tuesday night.Credit:Getty

Despite a messy second quarter from both sides, which saw Swifts star Maddy Proud hit the pine multiple times, Collingwood made the most of their skill with the super shot to trail 27-36.

The Swifts proved underwhelming in the shooting circle during the third quarter, but unwavering accuracy from shooter Emma Ryde gave Collingwood a glimmer of hope, closing the margin to 42-48 with 15 minutes to go.

But with Wallace back on court for the final quarter, the Swifts finished off the job with ease to win 54-69.