It is the second boat to retire from the race after Zen, the 52-footer owned by electrical industry entrepeneur Gordon Ketelbey, sustained rig damage. 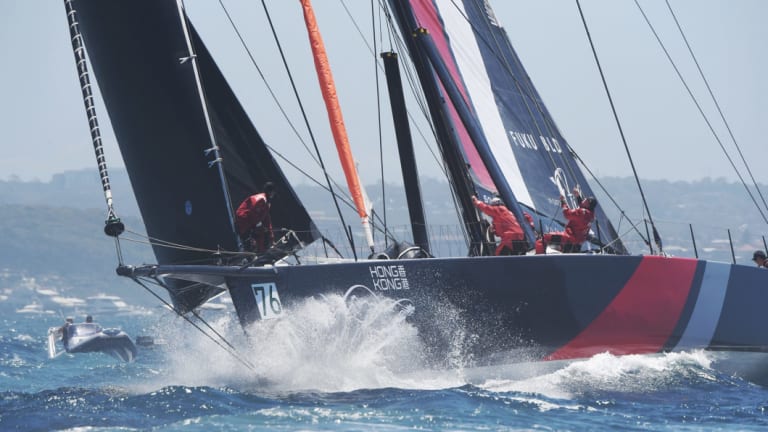 Under repair: Scallywag at the start of the Sydney to Hobart race, before it sustained damage.Credit:Nick Moir

It is expected to return to port in Sydney.

Scallywag's retirement is not the first misfortune the yacht has suffered; it broke two sails in a warm-up event for the bluewater classic.

Last year's winner Comanche was leading the Sydney to Hobart fleet past Kiama at 4:30pm on Boxing Day, with five super maxis out in front and the rest of the fleet between Kiama and Sydney.

Black Jack was the first yacht to round the heads, taking just over 13 minutes to clear the harbour from the starting line.

The harbour was crowded with hundreds of spectator boats, making navigating difficult for some of the super maxis. 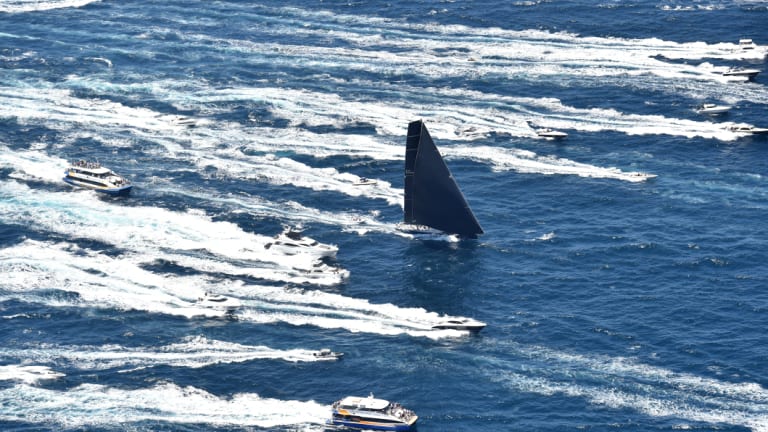 Out of the blocks: Black Jack leads the fleet through Sydney Heads.Credit:AAP

The moderate wind conditions, blowing north to north easterly on Boxing Day, favoured boats with less weight like Black Jack. However, Black Jack has had modifications to its keel since the last Sydney to Hobart to improve its performance in heavier conditions.

What impact that has on the boat in its traditionally favoured conditions remains to be seen.

Gun Runner, the Australian Army training vessel and smallest boat in the fleet, was last to clear the heads.

“The conditions have really been slowing down for the entire fleet,” Allen said before boarding his yacht Ichi Ban.

“So we’re really concerned that the transition we are going to get tomorrow and the 28th is really going to slow the whole fleet down.

“It is going to be really hard work. Tonight will be really fast. It will slow down eventually, but through the course of tomorrow, it’s going to be about people avoiding the areas of no wind.

“I think the leaderboard is going to change a lot through the course of this race.

If the wind dies down quickly and does not pick up until the fastest boats have finished the race then Mark Twain, the first boat to complete 25 Hobarts now owned by legendary skipper Michael Spies, would also be a favourite to take the Tattersall Cup for overall honours.

This race is the 20th anniversary of the 1998 disaster, when six sailors drowned at five boats were lost after a  devastating storm hit the fleet near Bass Strait.

The fleet will observe a minute's silence on Thursday in honour of those who lost their lives two decades ago.