Samantha Stosur has lapped up a moment in the Melbourne Park spotlight, winning through to the Australian Open women's doubles final.

The Queenslander paired with China's Zhang Shuai for an epic 7-5, 4-6, 7-5 semi-final triumph over Czech duo Barbora Strycova and Marketa Vondrousova on Wednesday night. 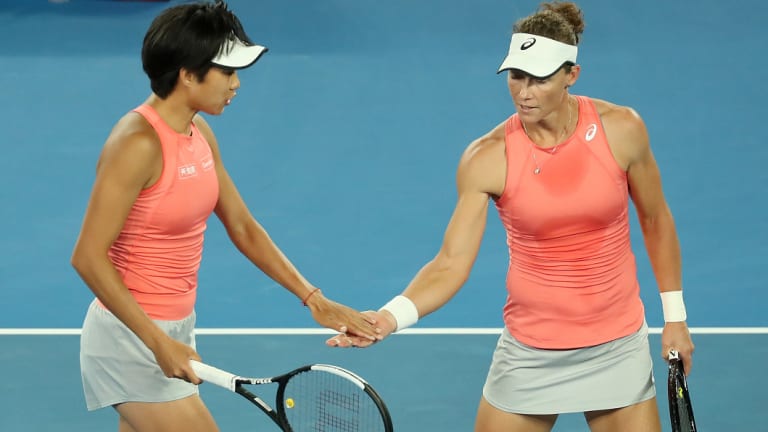 Zhang Shuai and Samantha Stosur have won through to the women’s doubles final.Credit:AAP

"You could feel the ride of the emotions from everyone in the crowd, the players, it was exciting tennis. We loved it out there.

"We played really well when it really counted and that last game was amazing."

Stosur and Zhang rattled off seven consecutive games to claim the first set, recovering a 5-1 deficit.

They were pegged back in the second set before Stosur's clutch serving and Zhang's net play won the day.

"My heart rate is so high … it was amazing. Such a good match," Stosur said.

"Shuai picked it up at the end, she won it for us.

"We're on a bit of a roll and hopefully we can keep it going in the final."

Zhang was overcome to triumph, exclaiming "I still can't believe we've made the final Sam!"

Stosur and Zhang will play Timea Babos and Kristina Mladenovic, the second seeds, in the final on Friday afternoon.

Stosur, a former doubles world No.1, has won each of the majors in either women's or mixed doubles.

She won the 2005 US Open and 2006 French Open with Lisa Raymond, and has three mixed crowns including the 2005 Australian Open with Scott Draper.

Three other Australians have the chance to follow in Stosur's footsteps in reaching a doubles final at the 2019 tournament.

John Peers pairs with Henri Kontinen in a men's doubles final on Thursday morning before Astra Sharma and John-Patrick Smith play their mixed semi-final as the closing match on Rod Laver Arena.

All locals have been eliminated from the boys and girls events, with no Australian entries in wheelchair singles or doubles.

Great mates and sparring partners Dylan Alcott and Heath Davidson return to action in the quad singles on Thursday.