Things can often get heated when clubs and countries clash in the battle for a star's services, but one British soccer commentator has taken it to a new level, weighing in on the Socceroos' Tom Rogic in spectacular fashion.

Rogic, who plays for Celtic in the Scottish Premier League, will miss the club's Old Firm derby against Rangers on December 29, joining up with the Socceroos in the Middle East from December 27 for preparations ahead of the Asian Cup. 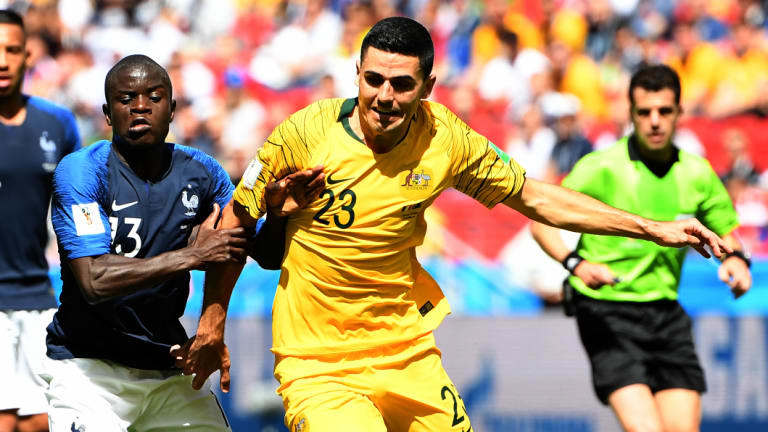 Club and country are brawling over Tom Rogic.Credit:AAP

Australia, the defending champions, begin their campaign against Jordan on January 6, and speaking on a BT Sports broadcast, commentator Chris Sutton didn't hold back his opinion on where Rogic should be.

"The thing which has upset me a bit … is the Tom Rogic situation and him not being able to play against Rangers," Sutton said.

"I think Australia have got Jordan in the Asian Cup. You don't need Tom Rogic to thump Jordan, absolutely not … in any way, shape or form."

"It's not right. There's a lot of Scottish football fans thinking that the Socceroos should shove their XXXX [beer] somewhere where the sun doesn't shine."

"It's not on! It's Mickey Mouse football, stick to your prawns and your barbecues, Australia."

Celtic manager Brendan Rodgers had urged Football Federation Australia to allow Rogic to play against Rangers and then join the Australian squad after that match.

"My feeling is he'll go after the Aberdeen game. It's a real real shame, because he's enjoyed those games. But we just have to get on with it and we'll go there with a good squad," Rodgers told BBC Scotland on Saturday.

"I think it's just unfortunate that he's been put in a position that he didn't really want to be in.

"He clearly wants to play in those types of games which are very important for us and for him. He's a professional player and of course he wants to go after that and represent his country in a tournament that he's very proud to do so.

"I spoke with Graham Arnold, the [Socceroos] manager, here and I had two really good days of trying to ensure relations are good between international teams and club teams."

Rogic is not the only Australian being called away from Scotland, with Hibernian trio Mark Milligan – who is the Socceroos' captain – Jamie Maclaren and Martin Boyle also leaving for the Asian Cup.