PITTSBURGH — The first month of the Pittsburgh Steelers’ season was messier than a food fight. Their next six weeks positioned them as Super Bowl contenders. Their previous three games entering this week, each worse than the one before, ushered them to the brink of a righteous collapse.

With their playoff chances hanging by an icicle if they lost Sunday, the Steelers instead created a fascinating conundrum — not for themselves, but for the rest of the A.F.C., which must now wonder whether the team that stifled Tom Brady and the New England Patriots must be reckoned with in the postseason or if the middling version of Pittsburgh will resurface.

The standings show that the Steelers have the fifth-best record in the A.F.C., but whether they are the fifth-best team will not be decided until January, when they expect to still be playing. Their 17-10 victory over New England, secured only when Brady’s fourth-down pass at the Pittsburgh 21 was knocked to the ground, kept them atop their division and prevented the Patriots from clinching theirs.

In a matchup of division leaders reeling after dizzying defeats — Pittsburgh flopped at Oakland, the Patriots yielded a 69-yard touchdown at Miami on a lateral as time expired — the Steelers (8-5-1) defeated New England (9-5) for the first time since 2011 because they did things that they don’t normally do.

With run after punishing run by Jaylen Samuels, they rushed for 158 yards — nearly as many as they had in losing their last three games. By drilling a 48-yard field goal with 2 minutes 30 seconds left, Chris Boswell — who had missed seven attempts this season, including a 32-yarder in the third quarter Sunday and a potential game-tying kick against the Raiders that sent Pittsburgh searching for possible replacements last week — supplied the final margin of victory. Facing a quarterback that had scorched them for 23 touchdowns with only one interception across their last eight meetings, the Steelers held, halting a promising fourth-quarter drive with Joe Haden’s leaping interceptionof Brady at the Pittsburgh 4.

“If he doesn’t have that framed,” defensive tackle Cameron Heyward said of Haden’s interception, “I’m going to get that framed for him.”

That snapshot will sustain the Steelers another week. The Patriots will review the film and lament all the deficiencies — 14 penalties, five consecutive punts, 30 percent efficiency on third down — that conspired to send them careening into unfamiliar territory. Instead of coalescing in December as they often do, the Patriots are hurting themselves. Instead of clinching the A.F.C. East, they dropped to the conference’s No. 3 seed, a game behind Houston, and are in serious jeopardy of failing to earn their ninth consecutive first-round bye.

“Obviously, we aren’t playing well enough to win, and it comes in a lot of different ways,” Brady said. “Turnovers and just missed opportunities.” 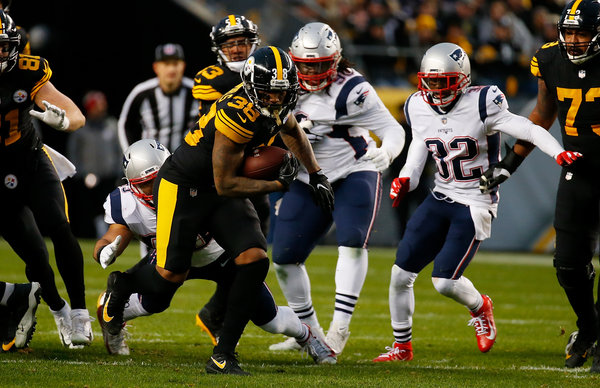 The most egregious example came with a little less than eight minutes remaining. After Duron Harmon intercepted Ben Roethlisberger for the second time in the game, New England, trailing 14-10, zipped down the field to the Pittsburgh 5 before a penalty and a loss pushed the Patriots back to the 16. On second down, Brady felt pressure from his left and lofted a pass toward the far sideline.

He said afterward that he had been trying to throw it out of bounds to avoid being sacked, but the ball never got there. Both of his receivers nearby, Julian Edelman and Rob Gronkowski, converged. But so did Haden, who skied above them to grab it and skillfully landed both feet in bounds as Gronkowski crushed him in the ribs.

“As soon as I caught it,” Haden said, “I felt like my legs went numb.”

After the play that saved their season, the Steelers’ defense sprinted to the back of the end zone and assembled as if for a class photograph. Amid the din at Heinz Field, some players flexed, and others just stood there beaming, nodding, bouncing, celebrating the way they did here back in November, when they throttled Carolina by 31 points on national television.

“I wouldn’t say we were at a crossroad, but there was sink or swim, whatever you want to call it,” said Roethlisberger, who threw for 235 yards and two touchdowns with two interceptions. “Some decisions needed to be made. Are we going to step up and play and come together as a team? Are we going to kind of divide each other? What’s going to happen? Nobody knows.”

By kickoff, the Steelers did know that it needed to win not only to remain ahead of its A.F.C. North rival Baltimore, which defeated Tampa Bay for its fourth victory in five games, but also to stay in the playoff picture altogether. A Steelers loss would have elevated the Ravens into first place and the surging Colts to the No. 6 seed.

“Anyone’s beatable every week,” said Heyward, when asked to assess the state of a conference where the top two teams entering the week, Kansas City and New England, lost. “You just have to be ready to play. We haven’t finished some games in the past, and today we did. It goes from week to week.”

Last week, the Raiders’ tight ends shredded Pittsburgh for 148 yards and two touchdowns. This week, the Steelers limited Gronkowski, who seems to embarrass them every year, to two catches for 21 yards. Last week, Derek Carr foiled the Steelers with a late scoring pass. This week, they thwarted their chief tormentor, Brady, denying him another fourth-quarter comeback.

Next week, the Steelers visit New Orleans, possibly with running back James Connor returning from a two-week injury absence. The Saints are one of the N.F.L.’s best teams. They have proved as much all season. The Steelers have not. But here they are, anyway. Underestimate — or overrate — them at your peril.