Mitchell Starc is being backed by his captain to rediscover his fiery best on a fast track in Perth.

Skipper Tim Paine concedes Starc wasn't in peak form during Australia’s 31-run loss to India in Adelaide, but says the paceman will be licking his licks in anticipation of bowling on a bouncy Perth pitch from Friday in the second Test. 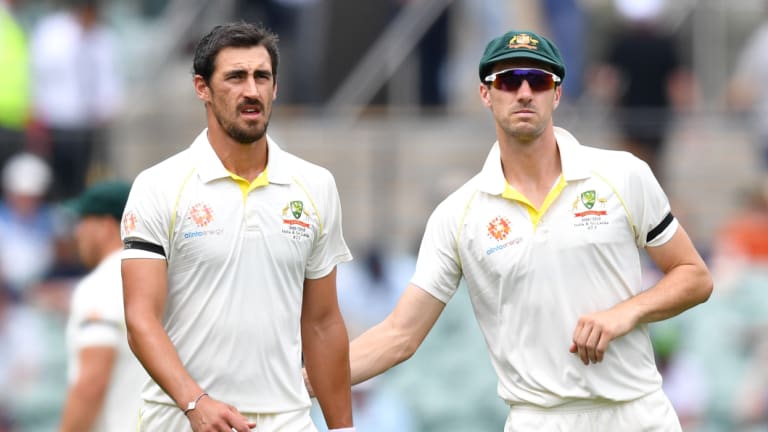 Failure to launch: Mitchell Starc (left) alongside Pat Cummins during the first Test.Credit:AAP

"When Starcy's on song, there is no better bowler in the world, particularly with the new ball," Paine said.

"In Perth, the conditions will suit him down to the ground … from what I am hearing, the wicket is going to be really fast, so he'll be a handful."

But some wayward spells and a lack of aggression raised eyebrows among a batch of former Australian players, including Mitchell Johnson who criticised Starc for a lack of intent.

Starc was given just two overs with the second new ball in India's second innings but Paine defended the performance of his chief strike bowler.

"For the majority of the Test, Starcy actually bowled really well," he said. "I saw a bit of stuff … that people were pretty critical of him.

"But I think his economy rate for a lot of the Test was really good – he took some wickets.

"He didn't set the world on fire but I think, for a long time, there's been a really big gap between Starcy's best and his worst.

"And from what I'm seeing, that is getting closer and closer every day.

"Was he at his best? Probably not. But I still thought he played his role."

The Australians fly to Perth on Tuesday with Paine expecting another tight battle against the Indians.

"Every Test match is a huge challenge and we have expected this series to be an absolute arm-wrestle from the get-go," he said.