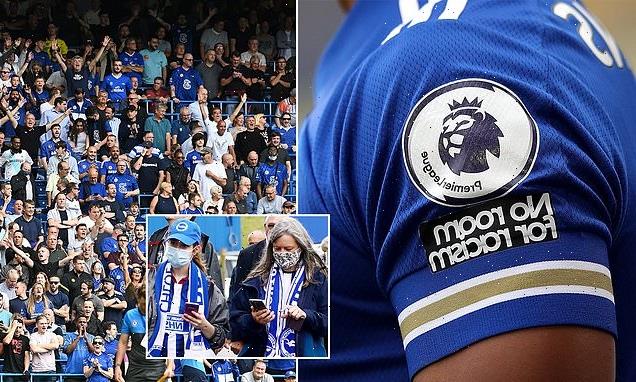 Some Premier League clubs have just SIX players vaccinated against Covid and just a third of top flight stars are double jabbed – with only Leeds, Wolves and Brentford reaching high rates

Premier League clubs fear the season could descend into chaos amid ongoing resistance to Covid jabs, with at least two squads having no more than six players vaccinated.

Wolves, Brentford and Leeds — with reported vaccination rates of between 89 and 100 per cent — have been successful in persuading players to have the jab, but others are struggling to convince their stars.

Well-placed sources have revealed to Sportsmail that just 30-35 per cent of top-flight footballers have been vaccinated, compared to around 70 per cent in the EFL. At least two top-flight sides have no more than half a dozen players jabbed, and others have less than half. 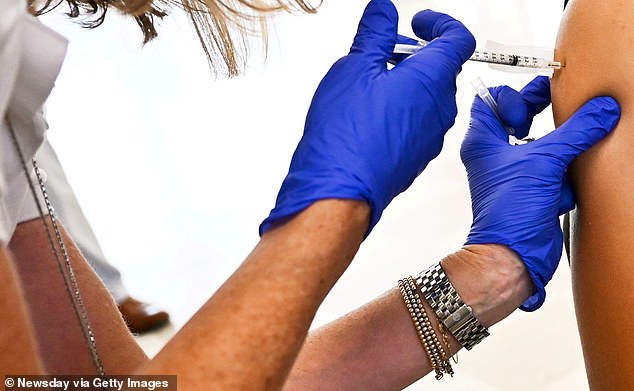 Premier League clubs fear the season could descend into chaos amid ongoing resistance to Covid jabs, with at least two squads having no more than six players vaccinated (file photo)

However, Premier League insiders insist the figure of fully jabbed top-flight footballers is higher than 35 per cent, and is expected to increase further with a host of players having already taken their first jab.

That illustrates the scale of the issue facing a host of teams heading into the winter. They are increasingly fearful that players who have so far refused to be vaccinated will be more susceptible to infection during the winter, when viruses such as Covid are transmitted more readily. It is understood there is a correlation between the number of players vaccinated and whether their clubs are playing in European competition.

While the proportion of players who have agreed to be jabbed varies between clubs, the uptake at teams who are not involved in Europe is somewhat lower than those who are. Wolves, Brentford and Leeds are exceptions to the rule. 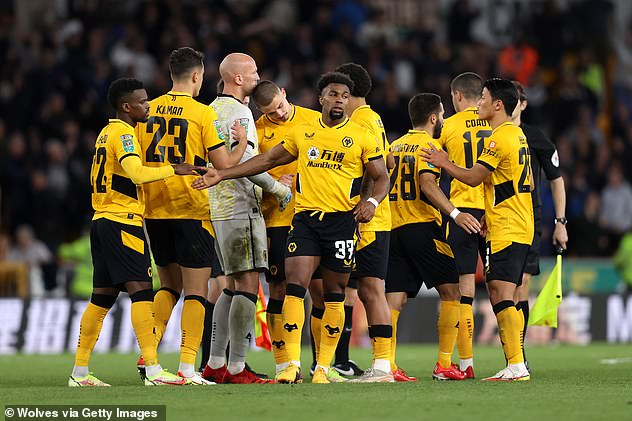 Wolves (above), Brentford and Leeds — with reported vaccination rates of between 89 and 100 per cent — have been successful in persuading players to have the jab

There is a clear incentive for players who regularly travel abroad to fulfil fixtures to be vaccinated, although it is understood several high-profile players at clubs in European competition are still declining the jab.

A number of sides who don’t have European commitments are said to be having difficulty persuading squad members to have the jab.

Sportsmail revealed on Wednesday that Premier League players were refusing to take part in a publicity campaign encouraging footballers to be vaccinated.

The sensitive issue of player vaccinations is likely to bubble up again in the coming days as national team bosses select their squads for the forthcoming international fixtures.

Indeed, there is some hope that the prospect of missing out on playing for their nations and the threat of lengthy quarantine periods will finally persuade unvaccinated international players to have the injection. 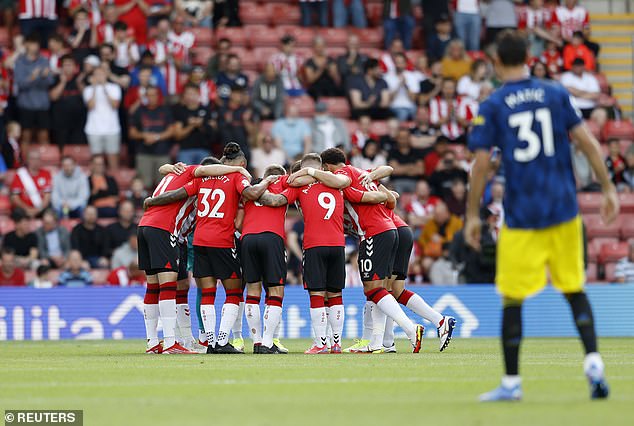 As it stands, players travelling to red-list destinations could be required to isolate in a Government hotel for 10 days on their return.

One option that could emerge is reducing quarantine restrictions for fully jabbed players — an initiative that might act as an incentive for players to consider the vaccination.

FIFA and the Government are in talks to create safe football ‘bubbles’ to exempt players from a full 10-day quarantine when returning from international duty in red-list nations.

The international window earlier this month saw the Premier League ban their players from travelling to such countries, and when Argentinian players did travel to Brazil, the game was abandoned inside five minutes amid farcical scenes as Brazilian health officials stormed the pitch.

The Brazilian FA is lobbying the Government after eight of their players — Raphinha of Leeds, Manchester United’s Fred, Thiago Silva at Chelsea, Manchester City’s Ederson and Gabriel Jesus, as well as Alisson, Roberto Firmino and Fabinho at Liverpool — were blocked from travelling by English clubs this month.

It is hoped players can isolate for just five days after returning, allowing them to return for their clubs sooner than normal.

CLUB-BY-CLUB: WHAT THEY SAID ABOUT THE VACCINE IN AUGUST

Pierre-Emerick Aubameyang and Alexandre Lacazette were among four players who were ruled of the Premier League opener against Brentford after testing positive for Covid-19. Willian and Alex Runarsson were the other two.

Manager Dean Smith has admitted that ‘not everyone is vaccinated’. ‘We are certainly pushing to get everyone vaccinated,’ said Smith. ‘We have a dedicated medical person who is on the case. It is something we are certainly encouraging.’

The club said their youth players were taking up the offer of getting vaccinated at a Turf Moor pop-up site before the senior team’s match at home to Leeds. Young fans are being encouraged to take advantage of the opportunity too.

Thomas Frank said the club have been emphasising players’ social duty to get the jab. ‘We all have a responsibility to do our best to fight this pandemic,’ he said. ‘We can do that by getting jabbed. That’s my advice. But everyone has their own choice.’

Manager Graham Potter, who lost a 48-year-old relative to the virus, said there was unease among players about the vaccine. Asked if players views were mixed, he replied, ‘Yeah, it’s not unanimous. There are concerns and it’s important that those concerns are addressed.’

Striker Romelu Lukaku says he is double-vaccinated, adding: ‘I have family members who are high-risk. As a player, it’s up to you. The only thing we can do is be careful around the general population because we have a lot of responsibilities.’

Manager Patrick Vieira has said the club are working hard to educate players but would not make vaccines mandatory. ‘What we did at the club is talk about Covid and explain what Covid is really, and the impact it can have on themselves, family and other people around them,’ he said.

Midfielder Fabian Delph published a quote on Instagram sharing anti-vaccine sentiments. Manager Rafael Benitez said: ‘We know the issues with Covid. We have lots of players isolating and this is a problem for the team.’

Midfielder Thiago is another of the few players to express his support for the vaccination. ‘We are fortunate to have access to it,’ he said over the summer. ‘We have less risk in our profession, but the vaccine is a priority in the world.’

Midfielder and Euro 2020 star Kalvin Phillips showed his support for the jab by opening the vaccination centre at Elland Road while striker Patrick Bamford was praised by the city council for his positive messaging around Covid protocols.

Brendan Rodgers, who lost players for a period last season after they breached Covid regulations, has said getting vaccinated should be down to the players. ‘It’s a personal choice and it’s ultimately down to the individual,’ he said.

Pep Guardiola is hopeful that the club’s medical department will convince players to get jabbed. ‘The doctors can do it,’ he said. ‘The players have to know that it can protect them and the rest of society but nobody can obligate them to do it.’

Ole Gunnar Solskjaer revealed vaccine hesistancy among his squad. ‘Some of them are already fully vaccinated, some are not sure,’ he said. ‘But we’re going to have a bigger session with them because it’s important that everyone knows what it’s about.’

Manager Daniel Farke says Premier League players are less likely to get jabs compared to their counterparts in his native German because they are under less societal pressure. ‘The social and political pressure here seems to me to be much less,’ he said.

‘A lot of our players who haven’t had the jab,’ said boss Steve Bruce. ‘It’s their prerogative. We’ve had two or three players really sick with Covid, so we’ve seen the severity of it first-hand. But there are a lot of conspiracy theories out there.’

Forward Theo Walcott recorded a video with the NHS after getting his second jab in which he urged others to do likewise. ‘I encourage everyone to take note and get their vaccinations when called upon,’ he said.

Nuno Espirito Santo said: ‘I respect all the personal choices – each and every one of us should decide – but I’m in favour of the vaccine and I would [encourage] all the players to get the vaccine.’

Xisco, the manager, repeated the sentiment of managers saying player should not be required to get vaccinated. ‘The only thing I can say is it’s a personal situation,’ he said. ‘In my case I’ve had the vaccine, it’s important, but it’s a personal decision.’

Winger Adama Traore was among the Spain squad who were vaccinated before European Championship over the summer. The club’s Under 23 squad had their summer schedule disrupted by coronavirus cases at scheduled opponents.

Vice-chairman Karren Brady said some players would still not get the jab if it was compulsory. ‘Some will still say ‘no way’.’ she said. ‘You can see why fit young people living in a bubble and being tested every few days are reluctant to have it.’