It is that time of year when the mad chase for Magic Millions Classic places is on but it is not only thought for Peter Snowden as Hightail and Yitai Synergy head to Randwick on Saturday.

“If they were to win and win well, the Gold Coast is there but you don’t just want to be taking horses up there,” Snowden said. “There are plenty of other options for them, only not with as bigger prizes. 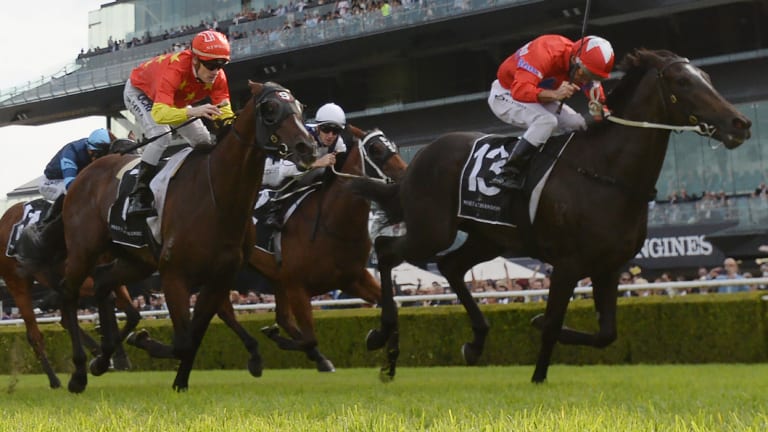 Pipped at the post: Bondi runs second to Seabrook in the Champagne Stakes earlier in the year.Credit:AAP

”You don’t want to want to be squeezing them too much to get to the Magic Millions and then running flat there. You want them to improve off the run and be peaking for the race up there.”

Hightail, a son of Written Tycoon, went to Kembla Grange and made short work of a 1000m maiden field and gets his chance in the city. Yitai Synergy has been to the barrier trials twice winning at Wyong and Randwick.

It has been a wait for both to be ready for raceday, but Snowden and son Paul are happy with the build-up.

“Hightail had a good experience down at Kembla in a race where there was bit less pressure than in the city,” Snowden said. “He can take the step up again and run well.

“If he runs well we'd look at the Magic Millions if he was in the field.”

Yitai Synergy had shown talent early on but shin soreness forced Snowden into a waiting game but the Dissident filly’s barrier trials have been encouraging.

She opened a $2.70 favourite for Saturday on the back of her trial wins, but Snowden in't getting carried away.

“I prefer to see them do it on raceday, so we won’t really know until Saturday,” Snowden said. “The trials have been good but they can look good on the track and in trials without the pressure of raceday.

“Corey [Brown] will ride her and she has a good draw, so we will get a good indication of where she stands.”

Snowden also has Rome, which was fourth in the Breeders Plate, running the BJ McLachlan Stakes in Brisbane trying to qualify for the Magic Millions.

“He is another that needs prizemoney to get in but he has experience and we were happy with his trial at Randwick,” Snowden said. “We have a list of possibilities from the Gold Coast and the next week will sort out how big the team is.

"He is one that I would like to have there.”

Snowden has opted to keep Champagne Stakes runner-up Bondi in Sydney to take on the older horses over 1400m at Randwick as preparation for the Magic Millions Guineas.

“We had the option of going to a group 3 over 1350m at Doomben but it will suit his preparation better to be on the big track at home, even though he takes on older horses,” Snowden said. “He is a classy horse and it will be better preparation for the Guineas.

“We don’t have to worry about getting him into the race because he is already there.”

Bondi's only win came in a Newcastle maiden but he has been placed in the Breeders Plate, Black Opal and Champagne Stakes as a two-year-old and was strong to the line returning in the Wyong Magic Millions three and four-year-old earlier in the month.

“He has come back well and he is already looking for the 1400m and with no weight he will be right in the race,” Snowden said.