Spencer Dinwiddie scored a career-high 39 points off the bench to lead the Brooklyn Nets to a 127-124 NBA win over Ben Simmons' Philadelphia 76ers.

Joel Embiid had 33 points and 17 rebounds and Ben Simmons scored 22 for Philadelphia, who played without Jimmy Butler because of a strained groin. 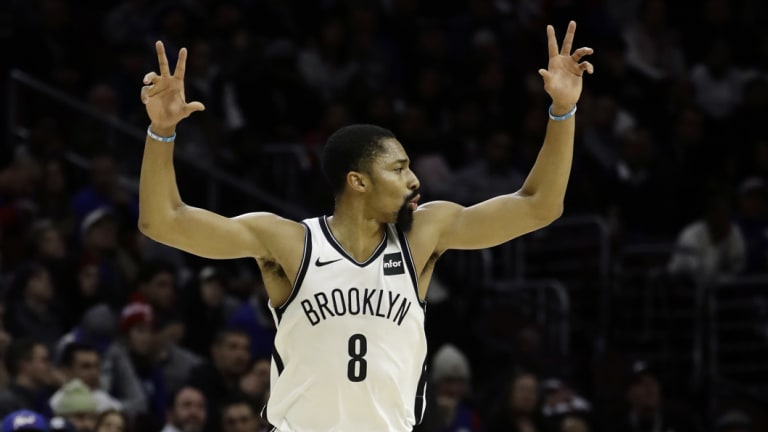 Spencer Dinwiddie was the difference for Brooklyn.Credit:AP

Simmons pulled down eight rebounds and dished out seven assists in another solid all-round performance.

His fellow Australian Aron Baynes started at centre for the Boston Celtics in their 130-125 overtime win at the Washington Wizards.

Baynes only played 16 minutes in his return from a sprained ankle, making his lone two-point shot and adding five rebounds while Kyrie Irving had 38 points, including the last 12 in the game for the Celtics.

Boston have won seven in a row to improve to 17-10 on the season to be fifth in the east.

Australian guard Matthew Dellavedova scored 15 points in his first home sice his return to Cleveland but it was Rodney Hood's go-ahead jumper with 23.7 seconds left that ultimately got the Cavaliers past the New York Knicks 113-106.

Indiana Pacers sealed a fifth-straight win as they toppled the Milwaukee Bucks 113-97.

Thaddeus Young had a season-high 25 points, while All-Star guard Victor Oladipo returned from injury to pick up a double-double, finishing on 12 points and 10 rebounds.

Eric Bledsoe scored 26 points for Milwaukee as Giannis Antetokounmpo was back from a sore neck and had a season-low 12 points in a double-double.

The Thunder went into the game as western conference leaders while the Pelicans are 5-5 in their past 10 games.

Mike Conley scored 23 points as Memphis Grizzlies snapped a two-game losing streak with a 92-83 defeat of the Portland Trail Blazers.

Jeremy Lamb hit a 22-footer with 0.3 seconds left as the Charlotte Hornets rallied from a late 10-point deficit to beat the Detroit Pistons 108-107.