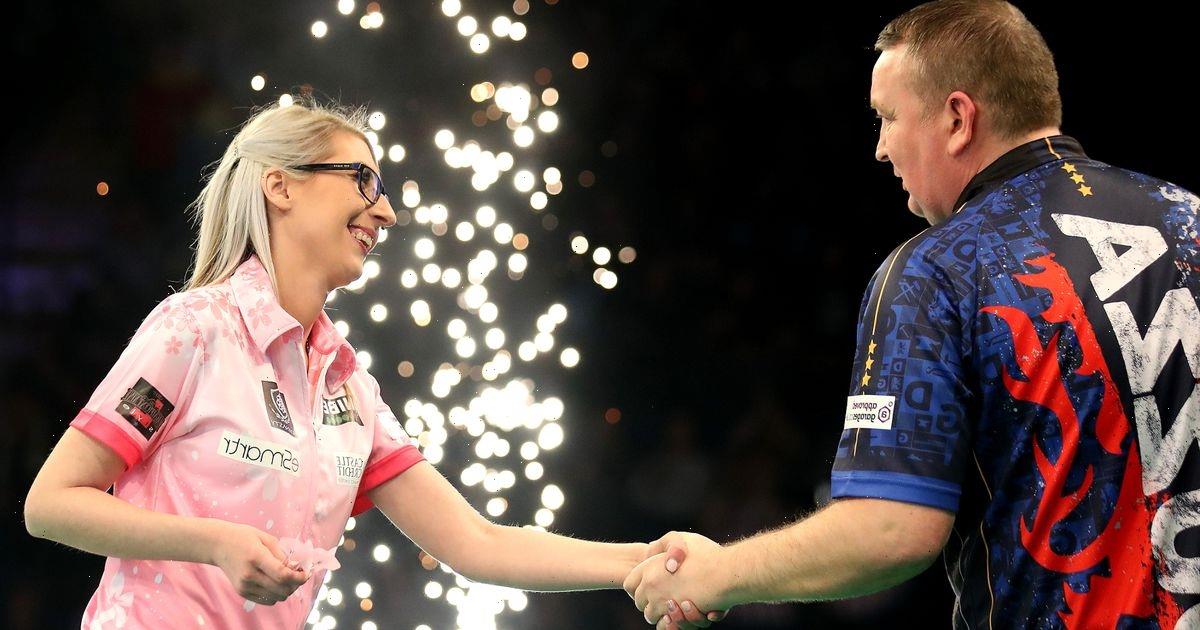 PDC chief executive Matthew Porter has revealed Fallon Sherrock was ‘not as close as people think’ to securing a Premier League spot.

The PDC Premier League Darts kicked off earlier this month, as eight of the world’s best players battle it out for one of the biggest prizes in darts.

Prior to the lineup being announced, many had tipped Sherrock to become the first female player to compete in the event, as she continues to make a name for herself in the men’s game.

Arguably Sherrock’s most impressive performance on the men’s tour came late last year, as she saw off Mike de Decker, Gabriel Clemens and Mensur Suljovic on the way to a quarter-final finish at the Grand Slam of Darts.

This again led to many arguing the Queen of the Palace’s case to earn a Premier League spot, however Porter has since played down Sherrock’s initial chances.

When asked how close the 27-year-old was to making the 17-night event, he told Online Darts TV: “Not as close as people think.”

The announcement of the lineup for the 2022 lineup was delayed this year, and many thought the wait was down to seeing if Sherrock was able to secure a tour card.

However when she failed at Q-school, Porter admitted this wiped her Premier League chances away.

He continued: “Obviously when she didn’t win a tour card it made it not a question, because we don’t have non-tour card holders in the Premier League.

Do you think Sherrock deserved a Premier League place? Let us know in the comments section.

“People used to say ‘why don’t you put the BDO champion in, why don’t you put Phil [Taylor] in after he retired’ things like that. We’ve got tour cards for a reason. These people are professional darts players.”

Whilst the PDC CEO did admitted Sherrock’s chances were not as close as first thought, he did reveal that she was ‘in contention’ if she was able to get hold of a tour card.

Don't miss a thing with our football updates!

Want to be on the ball with all of the latest football news?

Well then sign up for the brilliant Daily Star football email newsletter!

From the latest transfer news to the agenda-setting stories, get it all in your email inbox – don't miss a thing.

It only takes a matter of seconds.

Simply type your email address into the box at the top of this article and hit 'subscribe'.

And that's it, job done. You'll receive an email with all of the top news stories every single morning.

You can find out more information on our email newsletter on this link here.

“I feel so sorry for her because she gets so much scrutiny and so much of it is undeserved. She is just someone who wants to play darts, and she was so unlucky with the pandemic, because her career was just about to take off and it really knocked it back.

Despite Sherrock’s setbacks, Porter has tipped her to have a ‘bright future’ in the world of darts.

He commented: “She is someone who has got a bright future, and I think people have got to leave her alone a little bit…