Melbourne Victory's dream of winning a second W-League championship were destroyed by a Sam Kerr masterclass in a roller-coaster semi-final at AAMI Park in which fourth placed Perth Glory eventually beat the premiers' plate winners 4-2 in extra time.

Victory had taken the lead in just the second minute through Christine Nairn but lost goalkeeper Casey Dumont to concussion at half-time when leading 1-0. 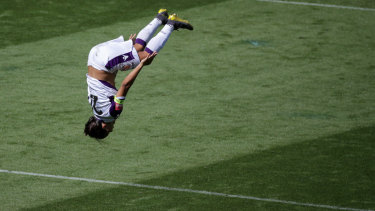 Sam Kerr celebrates her hat-trick with a backflip.Credit:AAP

Glory looked to have a grand final berth in their keeping when they led deep into injury time through goals by Matildas superstar Kerr and her fellow attacker, American Rachel Hill, with Kerr's equaliser coming 18 minutes from time and Hill's header four minutes from the end.

But second-half Victory substitute Grace Maher got the favourites back into contention when she deflected home from close range in the 94th minute after Laura Alleway flicked on Nairn's free kick.

That was not the end of the drama however, as Kerr, who showed just why she is one of the best forwards in the world, was to strike twice more in extra time.

Her second goal of the game came in the seventh minute of the extra 30 after Hill played a high ball forward.

As substitute goalkeeper Bethany Mason-Jones rushed off her line towards Kerr, the Victory defenders failed to close Kerr down and the Glory striker had the presence of mind to chip the ball back over Mason-Jones' head.

The hosts could only look on in horror as Kerr's looping delivery bounced and then nestled in the back of the net to give the visitors the decisive lead.

Kerr wrapped the match up in the 106th minute, playing a penalty area one-two with Leticia McKenna before slamming home the sealer from close range.

Victory had got off to the sort of start they could barely have dreamed of when they took the lead in the second minute through a Nairn ball that looked to have more than a touch of fortune about it.

The American midfielder delivered what initially appeared to be a cross before the ball swerved towards Glory keeper Eliza Campbell who could only help the ball in at her near post. 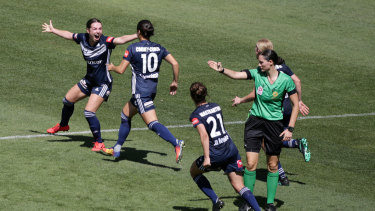 Grace Maher celebrates the goal that sent the W-League semi-final into extra time.Credit:AAP

Victory had the better of the opening 45 minutes but Perth were dangerous on the break. A driving Kerr run ended when she slid a pass through to Hill whose shot was bravely saved by Dumont, the goalkeeper requiring treatment after she collided with Hill.

Dumont failed a concussion test at half-time and was replaced by Mason-Jones.

Perth thought they had several good penalty appeals turned down in the opening half, the first when Kerr and Hill linked well together in the Victory area before Ella Mastrantonio shoved Kerr over. Referee Rachel Mitchenson waved away appeals for a spot kick.

Then Alleway appeared to deflect Hill's shot on goal away with an upraised arm, but once more calls for a penalty were ignored.

Victory surrendered the initiative in the second half as Perth pushed on, with Kerr ever threatening, her shot just after the hour blocked by Teigen Allen.

But the Matilda star was not to be denied and with 18 minutes remaining she put the West Australians right back in the contest.

The ball was played in from the right by  McKenna; Alleway got a touch but she and Allen failed to clear and Kerr pounced to finish first time.

Hill put Glory in front in the dying minutes with a header from a Kerr cross, and that looked to be that before Victory substitute Maher ensured a dramatic extra half hour.

Victory defender Sam Johnson, once a teammate of Kerr's when the pair played together in Chicago, was shown a yellow card for one foul too many on the Australian superstar, and her side finished the match with 10 players after Johnson was shown a second yellow in the first period of extra time, leaving them an impossible task.