Familiarity won't breed contempt for Melbourne Victory's W-League premiers when they face Perth Glory in a cut-throat semi-final on Sunday at AAMI Park, despite the fact that they wrapped up the Premiers Plate with a win over the Glory in their penultimate regular season fixture.

And neither will the Glory's Sam Kerr, the poster player of women's football in this league, become the major focus for a Victory side that is determined to go on with the job now they have won the right to host a grand final if they get past Perth. 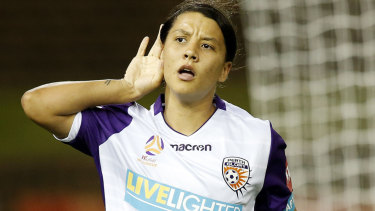 Coach Jeff Hopkins conceded that Kerr, one of the leading strikers in women's football anywhere in the world, was a threat, but said that his players cannot just worry about her alone.

"We have beaten Perth twice, but with players like Sam Kerr and Rachel Hill, they combine really well together, they are always a threat, so you can never really relax," he said.

"In both games we have had big periods of the game where we have dominated, but we have never seemed comfortable because of the threat that Sam and Hill pose.

"They also have some good young girls in midfield that support them really well. I think this weekend it's a big job for (Victory centre backs) Laura Alleway and Sam Johnson."

Those two were rested from the final game of the regular season, the catch up fixture in Canberra on Tuesday night.

"Both are nice and fresh," Hopkins said.

"We will work on putting something in place to make sure that we limit the amount of ball we get to Sam and make sure the players are tight all the time.

"But we will be concentrating mostly on ourselves, we know we have players on our team that can hurt Perth on certain areas of the field and that will be our main focus." 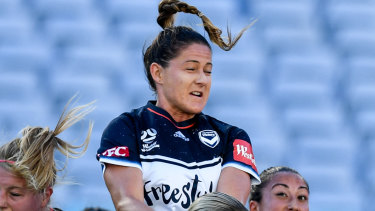 He said the players were in an upbeat mood – hardly surprising given their memorable campaign so far.

"It's been a hectic week, it's good to have got the Canberra game done and dusted now so we can focus on the weekend," he said.

"It's quite a short season and you are looking at making sure players are fit. Over the last four weeks we have just eased off a little bit with the girls. The training has just been a little bit lighter and we had a big trip to Perth followed by Canberra.

"We have managed the players, they are really focused game by game.

"The girls are in really good physical condition, which is going to be really important as I think it's going to be a physical game."