La’Roi Glover was director of player programs for the St. Louis Rams when the team drafted Aaron Donald, a defensive tackle out of Pittsburgh, in the first round of the 2014 draft. As a former interior lineman, Glover took great interest in the rookie. And Donald, it turned out, took great interest in his craft.

“I’d usually get to the office around 5, 6 in the morning. I’d get there and Aaron Donald would be there by himself, watching tape,” said Glover, now an assistant defensive line coach for the Jets. “He wouldn’t say two words. He’d get to the building early and go to work. And lift everything in the weight room. On the practice field, he took it very, very seriously. You can see why he’s having the success he’s having today.”

Man, the success he’s having today. The Rams are 12-3, and Donald has made himself a candidate for the N.F.L.’s Most Valuable Player Award. With 19.5 sacks, atop the rankings, he has already set a league record for true defensive tackles, and with a game left has an outside chance of reaching the single-season mark for all players (22.5), set by Giants defensive end Michael Strahan in 2001. Donald is also attempting to become the first interior lineman to lead the N.F.L. in sacks since Glover did it in 2000, when he racked up 17 for the New Orleans Saints.

Donald is a singular talent. As Denver Broncos guard Connor McGovern told Sports Illustrated’s Robert Klemko, “He can scratch his knees standing up, but he still has that natural pad level where he can lift you up and forklift you.”

But Donald, the 27-year-old Rams star, is not alone this year in reasserting the pass-rush bona fides of interior linemen. The Kansas City Chiefs’ Chris Jones, boxed in by better-known outside linebackers in Justin Houston and Dee Ford, is outdoing both of them and is second in the N.F.L. with 15.5 sacks. The San Francisco 49ers’ DeForest Buckner, the Cincinnati Bengals’ Geno Atkins, the Indianapolis Colts’ Denico Autry, the Seattle Seahawks’ Jarran Reed and the New Orleans Saints’ Sheldon Rankins all rank in the top 25.

Until recently, few teams could claim a dominant pass-rushing interior defensive lineman. In 2011, not a single tackle or nose tackle appeared in the top 25 of the sacks list. The next year, 2012, one defensive tackle showed up. That was Atkins, who tied for sixth with 12.5 sacks. As recently as 2016, there were no interior guys in the top 17.

But this year, the N.F.L. pass rush is being turned inside-out.

Kyle Shanahan, the 49ers’ head coach, has an athletic young disrupter in Buckner and a twice-a-year headache in Donald. He knows the value of inside pressure.

“You can have guys get up the field all day, and if there’s nothing in the middle, all the quarterback has to do is step up and just let those guys run around them and have a true pocket,” Shanahan said. 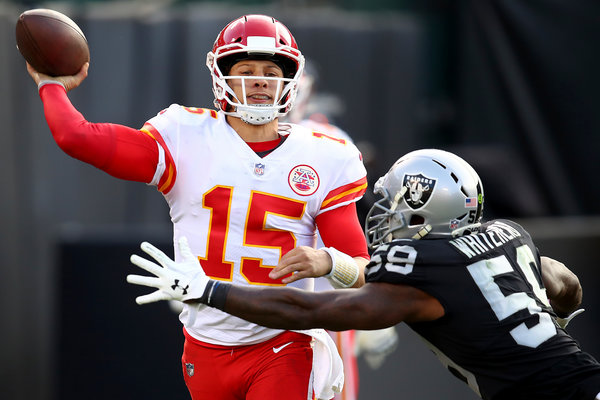 Before we get too settled in the pocket, though, we should probably talk about defensive line position. Between 350-pound nose tackles and fast-twitch edge rushers resides a lot of gray area. That’s especially true for 3-4 defensive ends, who play a hybridized role. Official team depth charts don’t always tell you where guys are really lining up.

Pro Football Focus provided positions for this article, but some players are hard to pin down. Like J. J. Watt. The website listed the Houston Texans’ defender as an interior lineman in 2012 and 2015; he led the N.F.L. in sacks both years.

Watt’s alignment had already begun to move outside by 2015, though, when he was frequently stationed opposite an offensive tackle but with an outside linebacker even farther afield. Pro Football Focus now considers Watt an edge rusher.

Hybrids aside, why are so many defensive tackles supplanting outside rushers on the sack charts?

Akbar Gbaja-Biamila, an outside linebacker/defensive end for three N.F.L. teams from 2004 to 2007 and now an analyst for the NFL Network, said it was largely because of that wider trend everyone is talking about in 2018 — the emphasis on passing.

As Gbaja-Biamila noted, the league still deploys three-technique defensive tackles who line up on the guard’s outside shoulder. But with pass rushing so much more important than gap stuffing, they are more likely to play a “loose-3” (shaded toward the gap) than a “tight-3” or “heavy-3” (shaded toward the guard, so he can’t muscle them to one side).

Suddenly, defensive tackles are finding themselves with more aggressive license.

“I remember the first time we prepared for Michael Vick when I was with the Raiders,” Gbaja-Biamila said. “The coaches’ butts were so tight: ‘You’ve got to keep him in the pocket! You can’t let him run!’ He put the fear of God in not only the players, but in the coaches.”

The presence of dynamic passers like the Chiefs’ Patrick Mahomes has changed things, he said. “Passing is at such a high premium now, with Mahomes throwing a gazillion touchdowns, that coaches have lightened up on the way they’re teaching. They’re allowing more freedom to defensive tackles.”

It makes sense to get your most athletic sackers out in space, where they don’t have as much traffic to work through. But if you have someone inside like Donald who can overcome the double-teams and chips, well, that carries a logic of its own.

As Shanahan said, “If you’ve got a real good pass rusher, wouldn’t you want him to be closer to the quarterback than farther away?”