Rory McIlroy watched the flight of his ball in dismay on Friday morning. “That’s so bad,” he said. “Oh my God.”

On the 16th hole of his 12th Masters, McIlroy sent an errant tee shot at the short par-3 plopping into the water. In that instant, he looked more like someone with a double-digit handicap than the player who was the world No. 1 when the coronavirus pandemic shut down the PGA Tour in March.

He finished his rain-delayed first round at three over par. But McIlroy, one of the pretournament favorites, should not be counted out of the only major championship he has yet to win.

He rebounded in the second round with a six-under-par 66 for a 36-hole total of three under that left him well under the projected cut line of even par.

The good news is that McIlroy has 36 more holes to catch the leaders. The bad news is that he will have at least six strokes to make up.

“I honestly have been playing so good coming in here, and then I go into the first round and I shoot 75, and I’m like, ‘Where the hell did that come from?’” McIlroy said. 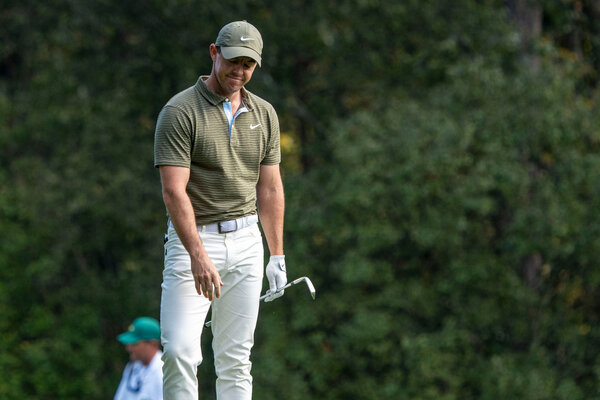 As he walked from the scoring house to the practice range to hit six shots during his half-hour break between rounds, McIlroy received a blunt pep talk from Jimmy Dunne, a friend who is a member of Augusta National.

Dunne has been something of a life caddie for McIlroy, introducing him to books like Greg McKeown’s “Essentialism: The Disciplined Pursuit of Less” and challenging him to think outside the golf bubble.

Long seen as Tiger Woods’s heir apparent, McIlroy, 31, collected four major titles before his 26th birthday. A victory at the Masters would give him a career Grand Slam. Anything less would extend his winless streak in the majors to six years.

McIlroy is deeply inquisitive, a searcher who is convinced that happiness in his personal life will lead to success on the golf course and not vice versa. In an interview earlier this year with Golf Digest, McIlroy said he had worked diligently over the past year to enhance his relationships with his parents; his wife, Erica Stoll; and others in his inner circle.

“Maybe I felt that everything revolved around me and everyone should know what I need,” McIlroy said.

He returned to the theme in his pre-Masters news conference this week when asked how the birth on Aug. 31 of his first child — a daughter, Poppy Kennedy — had changed his perspective.

“I grew up as an only child and an only child playing golf,” McIlroy said, “so I feel like the whole world revolved around me for a long time. And now it doesn’t. It revolves around this little person.”

McIlroy’s quest not to be the center of his world comes across as almost revolutionary in the world of professional sports. During his major championship drought, there are those who have wondered if McIlroy is too well-adjusted for the good of his game.

“You definitely can be too unselfish,” said Tim S. Grover, the author of “Relentless,” a book about the mentality of great performers that is based on his work as a personal trainer with basketball players like Michael Jordan, Kobe Bryant and Dwyane Wade.

McIlroy’s 2020 has definitely been a tale of two seasons. In his 11 worldwide starts before the tour shut down, he finished outside the top five only twice and collected two victories. In 12 starts since competition resumed, he has not had a top-five showing.

“There is an adjustment period when you have a newborn between being all-in and trying to figure out how to balance a new person in your life that requires your time and attention,” Grover said Friday in a telephone interview. “So right now my guess is he’s still in that stage.”

McIlroy has to let the people around him take charge at home, Grover added. He must trust them if they say they have everything covered, instead of scrambling to be simultaneously the best parent and the best player he can be.

Trying to improve all of one’s interpersonal relationships at the same time can be like trying to better every aspect of one’s game — driving, chipping and putting — at once.

McIlroy would be better off focusing on one relationship at a time, Grover said, adding: “When you try to be everything to everyone, you end up being nothing to yourself and to them. You end up being good instead of being great.”