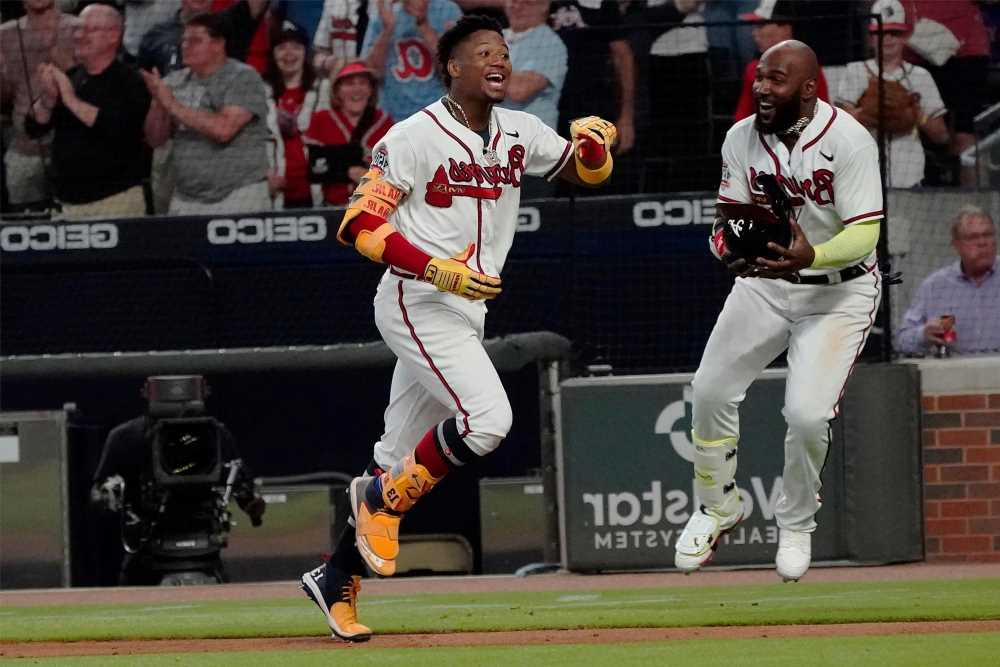 Mets’ rotation is in flux

ATLANTA — There were only so many punches the Mets could take over the past few days before finally collapsing.

A taxed bullpen finally cried “Uncle!” with Jacob Barnes needing only one pitch to the Braves’ Ronald Acuna Jr. in Wednesday’s ninth inning to seal it. Acuna blasted a walk-off homer that sent the Mets to a 5-4 loss at Truist Park, snapping their two-game winning streak.

Extended bullpen outings the past two days — which included a complete game by relievers on Tuesday — had left the pitching staff on fumes.

The Mets finished with two wins in the three-game series. They lost Kevin Pillar after he was hit in the face with a pitch and sustained a broken nose and Taijuan Walker, who lasted just three innings Monday before left-side tightness KO’d him and sent him to the injured list.

Aaron Loup surrendered the tying run in the eighth on William Contreras’ RBI single, but the Braves missed a huge opportunity to take the lead, as Dansby Swanson was nailed attempting to steal third for the second out. Jacob Barnes then struck out pinch-hitter Ehire Adrianza to keep it 4-4. But Acuna delivered against Barnes leading off the ninth to end it.

The Bench Mob struck in the seventh, when Tomas Nido’s pinch-hit, two-run single gave the Mets a 4-3 lead, completing a rally that started on pitcher A.J. Minter’s throwing error with two outs put Dominic Smith on second base.

Nido, on the bench after two strong offensive games — which included a go-ahead homer in the ninth on Tuesday — came to the plate after Jose Peraza’s RBI double sliced the Mets’ deficit to one run and blooped the first pitch to center field for the lead. James McCann, back in the lineup after sitting two nights for Nido, was part of the rally by drawing a walk.

Khalil Lee is off to a rough start offensively — he has struck out in his first eight plate appearances to begin his major league career — but the rookie is helping to compensate with his glove. In the seventh, he raced into right-center to snag Freddie Freeman’s drive to the warning track, likely saving a run after Acuna had walked. A night earlier Lee, used a full-extension dive to rob Ozzie Albies.

David Peterson got knocked out in the fifth after allowing three runs in the inning to place the Mets in a 3-1 hole. It came after Peterson retired the first 10 batters he faced in the game then recovered from allowing a Freeman single in the fourth by getting Marcell Ozuna to hit into an inning-ending double play.

Austin Riley, who homered in the previous two games, continued his rampage with a one-out double in the fifth to start the rally. After Swanson was retired for the second out, Peterson unraveled. Contreras was plunked by a pitch and Guillermo Heredia delivered an RBI single. Pitcher Charlie Morton followed with an RBI single before Peterson bounced a wild pitch that allowed Heredia to score the inning’s third run. After Peterson walked Acuna and allowed a Freeman single to load the bases, he was removed. Drew Smith retired Ozuna for the final out.

Jonathan Villar’s second homer in as many games and third on the road trip gave the Mets a 1-0 lead against Morton in the fourth. Villar crushed a 96 mph fastball and stood to admire the majestic shot, which landed in the deep reaches of the right-field seats.