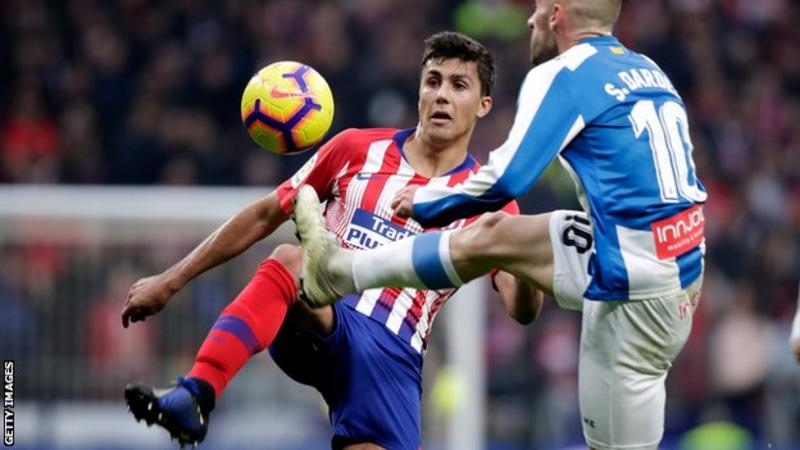 The 2019 summer transfer window has so far been notable for Chelsea replacing their manager, Tottenham breaking their recent habits by spending money, and both Manchester United and Arsenal trying to identify players who might help them to recapture former glories.

For the two clubs who finished clear at the top of the Premier League last season, however, it has all been rather quiet.

But while it seems things will stay that way at Liverpool, Manchester City have just broken their transfer record.

And, remarkably for a £62.8m buy, the signing of Spain midfielder Rodri from Atletico Madrid feels like it has flown under the radar, considering he becomes the fifth most-expensive player to join a Premier League club.

Only Chelsea, Liverpool and Manchester United, twice, have spent more.

It has been obvious for weeks it was happening. Yet many in this country will not know much about him. Not that many column inches have been used discussing him. No-one has really pondered whether manager Pep Guardiola is doing the right thing by investing so much.

So, who is Rodri – and why has there been relatively little interest in a signing that could stand City in good stead for the next decade?

Too small – but now growing in stature

As he now stands at 6ft 2in and has been bought as a screen for City’s defence, it is hard to believe Rodri was released by Atletico as a 16-year-old in 2013 because he wasn’t big enough.

He arrived at Atletico from the Rayo Majadahonda club in Madrid, where he first got to know Lucas Hernandez.

Through shared experiences as 10-year-olds and their subsequent moves to Atletico, the pair struck up a friendship which is close enough for Hernandez to have tried to persuade Rodri to join him at Bayern Munich this summer, but not, as it turns out, to swing the decision against City.

It is impossible to know what would have happened if Rodri had not been released by Atletico in 2013.

As a 17-year-old he was about to leave a club who would be crowed La Liga champions the following season and has not finished outside the top three in Spain since.

In contrast, he was joining a Villarreal team who were just returning from a season in the second tier and, while they never finished below fifth with Rodri as a first-team player, the slightly lower level ensured the midfielder played 63 league games and 84 in total, impressing enough to persuade Atletico to buy him back 12 months ago.

His rapid rise will not have escaped the attentions of Real Madrid and Barcelona, but City have been able to pounce in part because both those clubs’ focus lies on strengthening other parts of the team.

Real are targeting offensive players. At 27, Casemiro is in the prime of his career and one of the key components of the Brazil side that has reached the Copa America final.

Barcelona have legendary Spain midfielder Sergio Busquets, who signed a new contract in September 2018 that does not expire until 2023.

What does Rodri do?

Rodri is often likened to Busquets, mainly because of his positional sense and ability to spot a pass.

There are subtle differences though. Observers who have watched Rodri closely feel he is more athletic than Busquets. At the same time, they feel Rodri’s movement is less intelligent.

What City’s new recruit is unlikely to offer is much of a goal threat. He managed three in 47 appearances in all competitions for Atletico last season. The previous year at Villarreal, he found the net once, the only time he scored during a run of 89 games for his two professional clubs.

As that strike came against Levante on the final day of the La Liga campaign, City fans probably shouldn’t get their hopes up too much for a blistering start by their new arrival.

Then again, scoring is not something City as a squad have a particular issue with.

As a defensive midfielder, Rodri is said to be outstanding. And, given the position of strength City have worked themselves into, he will have a season to bed in as Fernandinho’s stellar Blues career draws to a close.

Possibly the biggest reason why Rodri’s arrival is not being accompanied by a fanfare is the strength of the squad he is coming into.

Under Guardiola, City have amassed an incredible 199 points in two seasons. The next highest two-season total is Chelsea’s 186 from 2004-06.

Liverpool secured the third highest points total in Premier League history in 2018-19 – and still couldn’t finish above Guardiola and his players.

Faced with such statistics, it is hard to argue Manchester City are not the best team in Premier League history. The gap between them and the rest – Liverpool must prove they can match their fabulous achievement – has never been so wide.

Guardiola is in the happy position of being able to identify potential weaknesses rather than actual ones.

The number six position is not actually a problem now. But, with Fernandinho celebrating his 35th birthday before next season is out and Germany midfielder Ilkay Gundogan yet to commit to a new contract with his present one expiring in 2020, Guardiola is planning ahead.

But Guardiola has gone for Rodri knowing, if he wishes, the player can be eased in gently, ensuring he is fully acclimatised to life in England by the time the biggest tests come around in the second half of the campaign.