Australia's UFC middleweight champion Robert Whittaker will not defend his belt on home soil on Sunday.

A hernia has forced Whittaker (20-4) out of his middleweight championship defence against Kelvin Gastelum (15-3, 1nc) in the main event of UFC 234 at Melbourne's Rod Laver Arena. 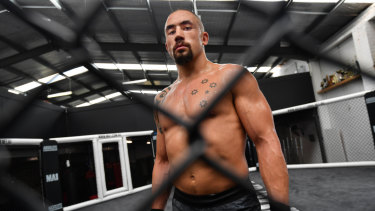 Plans for Whittaker's first official title defence were thrown into disarray late last night when the 29-year-old complained of pain in his abdomen before being diagnosed with a hernia in hospital.

It is understood a devastated Whittaker will undergo surgery on Sunday.

It marks the second time Whittaker has been forced to withdraw from a scheduled title fight down under, after a range of injuries kept him from fighting Luke Rockhold at UFC 221 in Perth last year.

Whittaker's withdrawal has thrown a spanner in the works for UFC president Dana White, who was banking on the winners of the main and co-main events to square off later this year.

Those plans will now be delayed, given Gastelum is next in line for a title shot before the winner of the Adesanya-Silva showdown.

The UFC's hopes of selling out ANZ Stadium for a Trans-Tasman showdown between Whittaker and Adesanya may have to wait just a little bit longer.