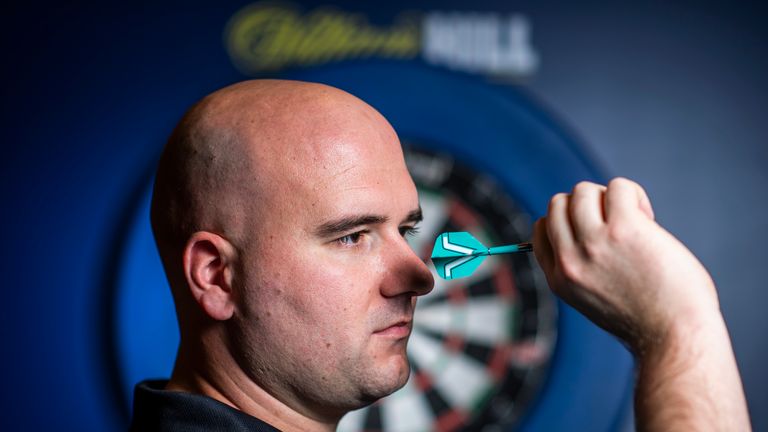 As has become tradition on opening night, John McDonald will introduce the reigning and defending champion to kick off festivities at the World Darts Championship. It’s been quite a journey for last year’s fairy-tale winner Rob Cross, writes Paul Prenderville.

There is a story that perhaps charts Cross’ rise better than anything else.

On arrival at his manufacturers offices and factories, his darts were weighed and all three darts weighed a different amount – ask any aspiring pro or gnarled veteran and they are left open-mouthed at such nonsense.

It may not sound like much but in a sport where fractions of millimetres prove the difference between wining and losing, it was a staggering admission that still surprises the pros and analysts who hear it.

Heading to Ally Pally this year the stories are of a battle with the demands of being the world champion, the changing lifestyle that has seen him put on – and subsequently lose – up to five stone, and the tinkering that comes with the search for sporting perfection.

It is perhaps the greatest darts story ever told, maybe even one of sports’ greatest Cinderella tales – 12 months ago he arrived in north London as someone the wider sports and general public were not quite aware of.

The annual extravaganza that is the World Championships is when darts jumps to the front of the sporting calendar, but Cross had put together quite a year on the circuit and was fourth favourite for the title. 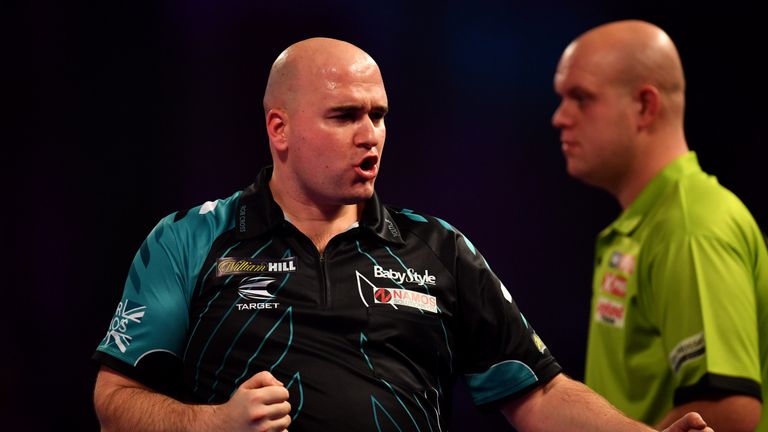 That he went on to beat Michael van Gerwen in the semi-final and the great 16-time champion of the world Phil Taylor in the final only enhanced the story and thrust Cross into the public’s consciousness.

To Cross it was just a case of playing darts; local league darts, darts at home, helping out a friend’s team, all while balancing life as an electrician and as a father.

This year it’s been a journey that has continued, and like 2017 it has had a lot of firsts – Premier League and World Series debuts, endless demand for sponsors and media commitments, and of course a string of duties that come with being the world champion. 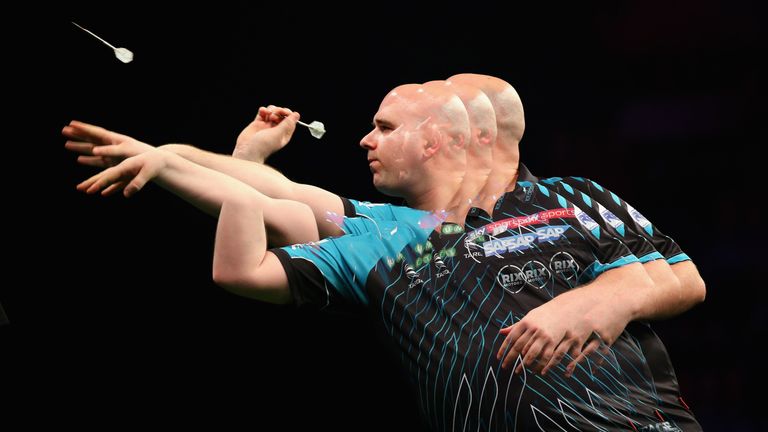 “At the end of the day, you’ve got to be ready. It’s the biggest competition of the year and you go in there and everyone wants to win it.”

The man now known as Voltage – the nickname was rushed through last year as the man from Hastings surged through the rankings but has now taken hold. The walk-on music continues to be a nearly-but-not-quite moment – at last year’s worlds he jettisoned Danger High Voltage in favour of Hot, Hot, Hot (Robby Cross, Cross, Cross) and it hasn’t quite caught on.

That’s the party side of darts, the party side that will be evident when the festivities get underway on Thursday night and Cross has the honour as the champion of being the star to turn on opening night.

He has a tough draw and it will be interesting to see how he deals with things as many are tipping last year’s fairy-tale ending to be replaced by something different. 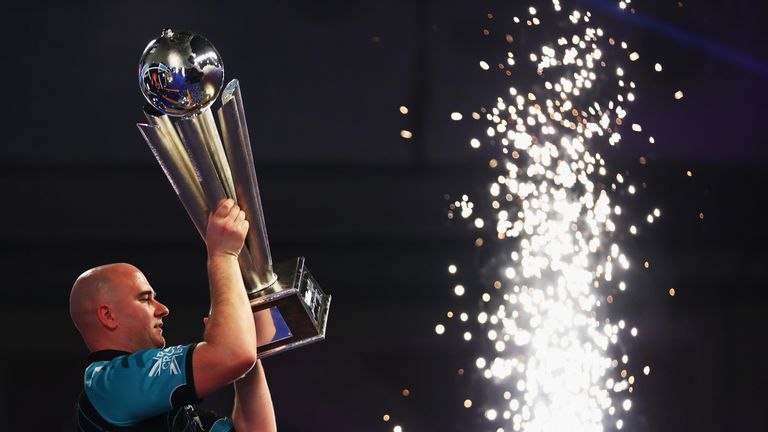 But throughout everything, Cross has taken it all in his stride and has been great company at every media event with a tale to tell and duties carried out without a hint of strain – he’s loved every minute and believes there is more to come. At Premier League Finals day to the launch of the expanded World Championships, he has taken each step as a learning curve.

Some will have you believe it’s not quite been the year many expected, that says more about the relentless brilliance of Michael van Gerwen on the circuit than anything else.

But Cross has won two titles across the year, risen to No 2 in the world rankings, marked his Premier League debut by reaching the semi-finals where MVG had his revenge at The O2 and starred on the World Series, winning in Brisbane and reaching the finals in Las Vegas and Shanghai. 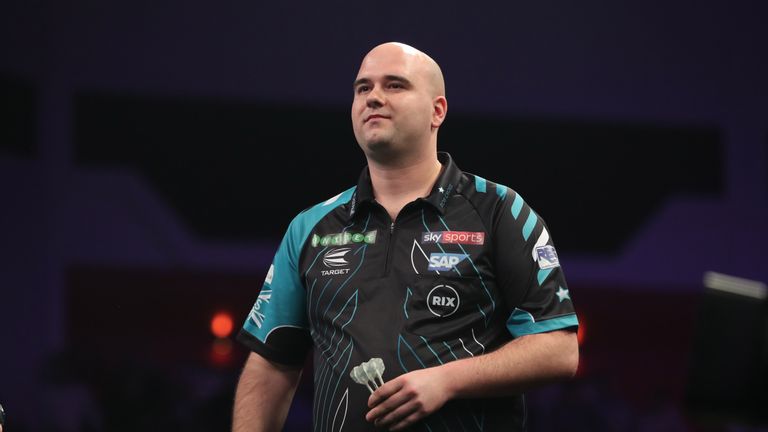 A list of those cities charts darts’ rise as well as Cross’, but the man himself has remained unfazed – his biggest concern has been getting the practice routine right. It’s what fuelled the rise last year and what Cross admits has prevented him hitting the heights again this year.

And so back to that story about three uneven darts. It’s only a surprise story because of what Cross achieved in such a short space of time but what last year’s triumph did more than anything was rubber stamp, underline and bold up the PDC’s mantra: anyone can triumph.

It perhaps paved the way for the PDC to expand the tournament into its 96-player behemoth that will be on show at the Alexandra Palace. There will be a record of 28 different nationalities featuring in this year’s line-up, while Lisa Ashton and Anastasia Dobromyslova won the first ever women’s qualifiers.

Testing times for the world No 1

He’s proved to be a great ambassador for the sport, something that didn’t first come naturally, why would it having only been a pro for a year? At the press launch in London for the tournament, Cross smiled while regaling the tale of where he learned to play the game. The Cross family dartboard – where he regularly suffered defeats to aunts and more importantly his mum.

From family defeats he stood at Ally Pally last year and dazzled in a thrilling run to the final that included surviving match darts against Michael Smith, Dimitri Van den Bergh and Van Gerwen. 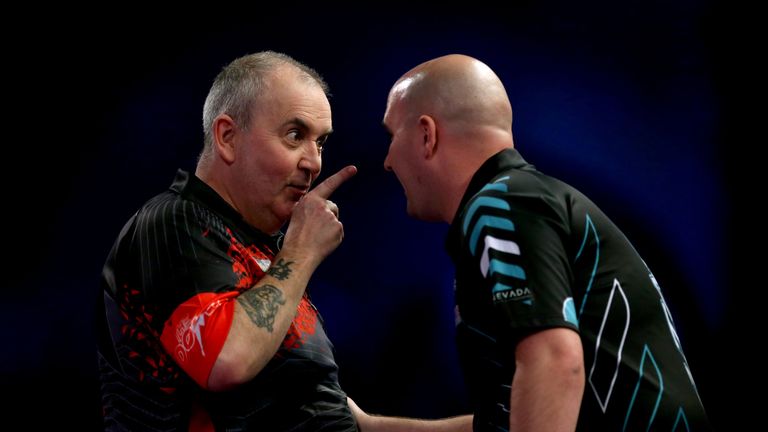 He came through them all and saved his best until last. He steamrollered the great Taylor in the final with a display that left Wayne Mardle, oche-side alongside this writer in the media gallery, dumbstruck. ‘I’d never seen anything like it’, Mardle recalled a few months afterwards.

In his post-match press conference, trophy alongside him Cross would rewind back a further 12 months and tell the assembled media that he watched Michael van Gerwen beat Gary Anderson in the pub alongside his mates. Last year Cross arrived at Ally Pally riding the crest of a wave following a debut year that had never before been seen and ended with him becoming the first man to win the title on his PDC debut.

On Thursday, with evenly-weighted darts, a year as champion, and the remarkable 12 months of last December will become a remarkable 24 months as the two year journey concludes with those immortal words from McDonald, but if Cross’ story so far is anything to go by, it’s likely to be the start of another thrilling chapter.

You can follow every dart from every session of the World Darts Championships on Sky Sports Darts, coverage gets underway on Thursday with a live preview show from 6.30pm followed by Day One – check out the full schedule here

16 days of coverage continues through until the final on New Year’s Day and you can stay up to date with the action behind the scenes by following us @SkySportsDarts and getting all the latest news previews and interviews at www.skysports.com/darts