Brisbane Roar underlined their reputation as the A-League's comeback kids by denying Perth Glory once again with another late equaliser on Saturday.

Just as they did in the opening round of the season, the Roar broke Glory hearts by salvaging a 1-1 draw – this time through a powerful header from defender Macaulay Gillesphey. 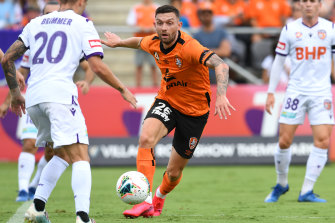 Jay O’Shea of the Roar plays through for the Roar.Credit:AAP/Dan Peled

Until the towering Gillesphey's 85th-minute effort from a perfectly-placed Jamie O'Shea corner, Perth looked to have the match in control in breezy conditions on a spongy Redcliffe pitch.

The draw takes Tony Popovic's men to second place on the table with 30 points, passing Melbourne City and Wellington (30) on goal difference.

But Popovic will feel they should have cut the gap to runaway leaders Sydney FC (40) after dominating the first half and giving the Roar attackers few genuine chances.

Gillesphey's goal – his first in the league – means the Roar have now salvaged 12 points from losing positions this season and it keeps them in sixth place on the ladder, on 26 points, and just behind fifth-placed Adelaide (27).

It was Glory marksman Bruno Fornaroli who delivered Perth's lead by showing his class in the 33rd minute when Diego Castro found him on the edge of the box.

Despite being tightly marked, the Uruguayan created space with five touches and two fakes before unleashing a strike that took a deflection from Jacob Pepper to leave Jamie Young grasping at thin air.

It was his eighth goal in as many matches and his 11th for the season to leave him third in the Golden Boot standings. 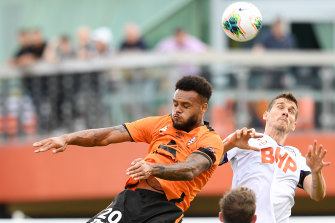 Aaron Holloway of the Roar (left) and Tomislav Mrcela of the Glory leap for a high ball.Credit:AAP/Dan Peled

Back at the scene of their memorable 4-3 comeback victory over Melbourne City, the Roar thought they had a golden chance to continue the roll when awarded a 21st-minute penalty from an unruly challenge on Scott McDonald.

But the VAR found McDonald offside and Perth could breathe a sigh of relief in a half they otherwise dominated.

In his second start for the Roar, McDonald was well contained by the compressed Glory defence but did miss a key chance in the first half when a Corey Brown cutback found him free in the box.

Brisbane coach Robbie Fowler lamented his side gave the visitors "too much respect" and time on the ball before the break and their second half was far better.