When you are are a young jockey on the comeback trail, any publicity is good publicity as you look to get your name out to trainers and owners and establish yourself as a race rider once more.

So for Dylan Dunn, riding six winners  on Saturday at Colac could not have come at a better time. 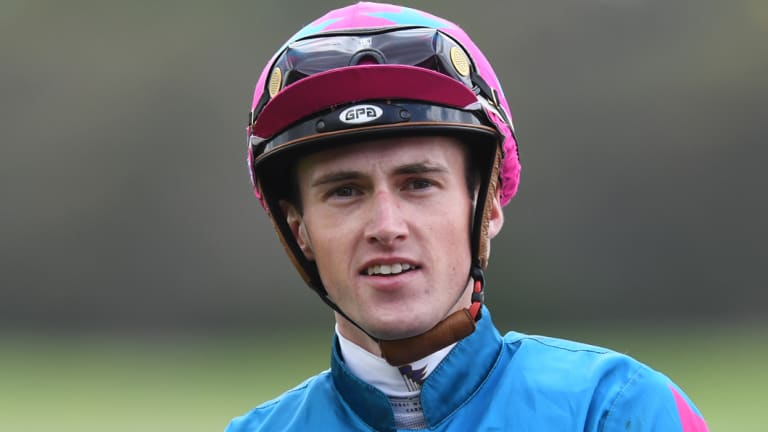 Back in the saddle: Dylan Dunn.Credit:AAP

Yes, it was a secondary provincial meeting and very much in the shade of the main Flemington feature program.

But the rare feat ensured that the former champion apprentice and son of top senior rider Dwayne was in the spotlight in the way few other jockeys ever are, unless they ride a Melbourne Cup winner.

And for someone looking to rebuild their career after being forced to prematurely retire through increasing weight, it was the best possible calling card.

It has paid immediate dividends.

On Boxing Day Dunn won't be at Geelong or even further afield at country tracks like Nhill, Penshurt or Kerang looling for rides – he will be back in the city at the main meeting of the day at Caulfield, where he has a handful of booked mounts.

Dunn is due to partner Tblisi for Flemington trainer Steve Richards in the Joe Brown Handicap, Immaculate Secret for Leon Corstens in the Frank O'Brien Handicap and Macrobius for Jamie Edwards in the last, the Ladbrokes Handicap.

The Dunn who has come back to the saddle now is a very different young man to the one who conceded defeat in the battle of the scales, a contest so many riders struggle to ever win.

His weight ballooned and he worked in real estate and also tried to carve out a media career with Racing.com, but the desire to return to racing never went away and as he matured he found a new mental strength and discipline.

His body changed, he learned better habits and his weight got back under control.

Now he doesn't try to punish himself all the time and only takes mounts in the weight range he knows he can do comfortably.

''I had to step away after a terrific season and career as an apprentice. I was very sick with glandular fever and my weight skyrocketed.

''But I learned a lot in the process. I came back with a different mindset and body.

''My metabolism is different. I am riding two to three kilos heavier than before and my mental state is better. I ride at 57 now, although I am willing to get to 56 if it's for a good ride in a group or listed race.

''I am here for the long haul now and hopefully can get to ride a group 1 winner. When you are on the sidelines you see your friends riding winners and you have this hunger to do really well again.''

His feat at Colac was quite extraordinary; many jockeys struggle to get six rides in a day and are delighted to boot home one winner.

To go six from six is the stuff of dreams, even if it means alienating your weighing room colleagues for an afternoon.

''They asked me to give them a chance, they were saying things like 'it's Christmas, we have got to earn some money too'.

''I said I would let them have the third race…..because I didn't have a ride in it.

''You do go out there to win every race, but you don't expect to. But I got more confident [with each winner]. I got to four, and I gave the four fingers, when I got to five I did the 'shhhh' thing [finger to the lips] and then when I got the sixth I was thinking this is a bit of a joke.''

It was more like a dream than a joke, and if Dunn just bags one at Caulfield on Wednesday he will be the one laughing.