Having lived through the physical and emotional roller coaster that comes with playing in one of the four majors right to the final night, a sleep-deprived Novak Djokovic had only a couple of simple short-term goals in mind as the magnitude of what his 2019 could look like started to take shape.

For Djokovic the sheer relief that comes with being the man left holding the trophy aloft, in his case a record seventh Australian Open title thanks to Sunday night’s rout of Rafael Nadal, was real. 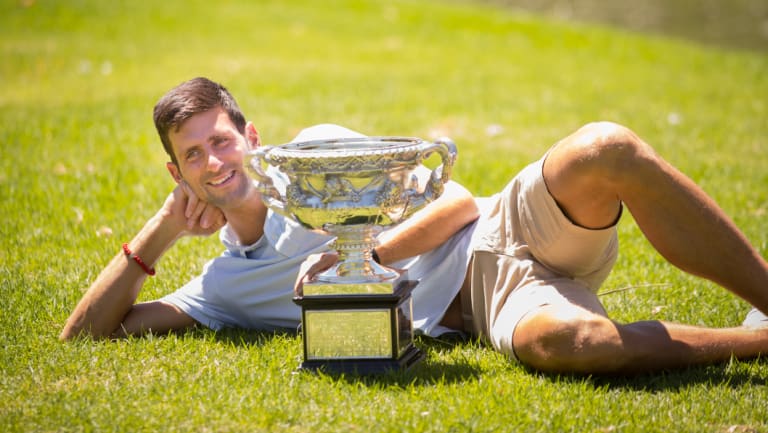 Novak Djokovic kicks back in the Botanical Gardens after winning his seventh Australian Open title.Credit:Simon Schluter

Under the bright summer sun in Melbourne’s Botanic Gardens and after a night of extensive media commitments and celebrating with Serbian fans after his two-hour annihilation of Nadal, a contemplative Djokovic said “recharging the batteries” was the immediate priority.

“The relief is the first thing that happens because there’s so many expectations, and emotions and tensions involved in anticipating the grand slam [tournament],” the world No.1 said.

“Living through it those three weeks takes a lot out of you. So the first thing I’m going to do is recharge my batteries and obviously then, you know, have time to reflect.”

The 31-year-old does have a lot to think about. Firstly there’s the past 11 years of his life since his breakthrough slam in Australia. That 2008 title has, extraordinarily, been followed by six more finals and six more titles in Melbourne.

Then there were his injury woes almost 12 months ago to the day when the Serbian, about to undergo elbow surgery, was left contemplating his tennis mortality. And now, as the reigning US Open, Wimbledon and Australian Open champion – and having surpassed childhood idol Pete Sampras’ 14 majors – the window of opportunity to shred through the sport’s history books.

Djokovic and his entourage will allow the Serb star a spell. The French Open in May will always be front of mind, however. It’s there that Djokovic has the chance to again hold all four major tiles at the same time. It’s no mean feat, of course, with the sport’s king of clay Nadal set to be gunning for a 12th title there. It will be different on the red dirt this year too, with the likely presence of Roger Federer. 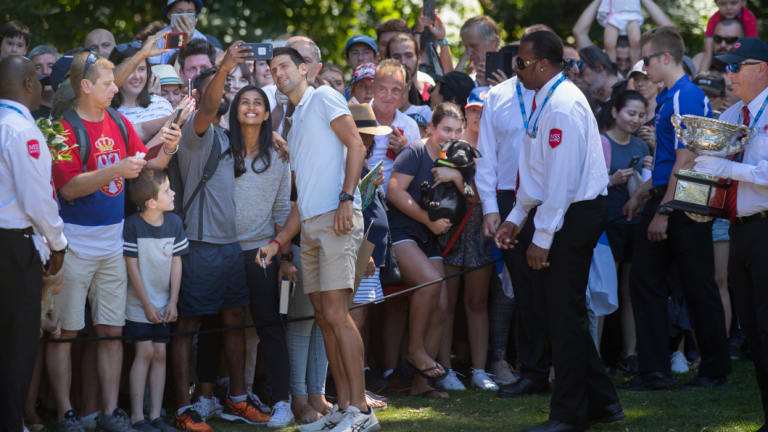 Djokovic takes a moment to chat with fans.Credit:Simon Schluter

Djokovic knows his mindset for Paris will be different compared to three years ago when he ruled the roost for the only time at Roland Garros.

“I did put a lot of pressure on myself in the past and lost several finals in a row and then I managed to win it in ’16,” said Djokovic. 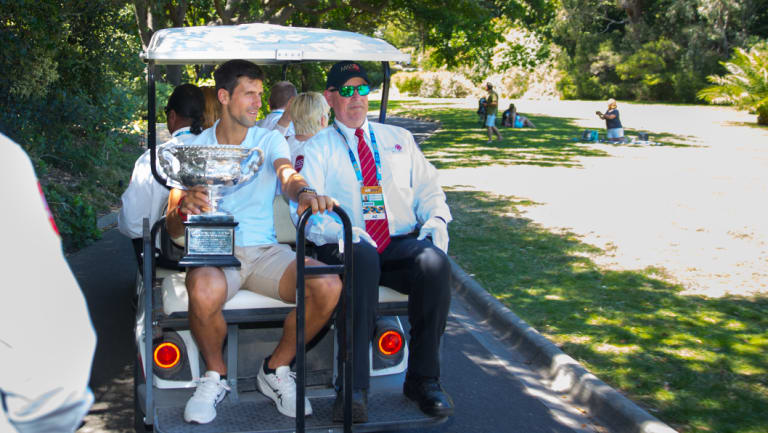 Djokovic rides through the gardens with his trophy.Credit:Simon Schluter

“Everything is possible in life so that’s kind of a philosophy that I have.”

With that, the world No.1 was done and finished with Melbourne for another year. Gone, but certainly not forgotten. That’s impossible when you’re now the only man to win the Australian Open seven times. Your legacy in this city is secure.