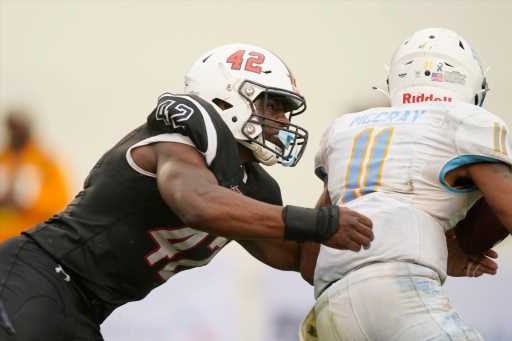 On Thursday, Brown made it public that he will follow his former head coach to Boulder.

Brown was one of two players to announce their transfer to CU on Thursday, as former Fresno State defensive tackle Leonard Payne Jr. is also joining the Buffs.

A 6-foot-2, 220-pound defensive end, Brown has two seasons of eligibility remaining and he becomes the sixth Jackson State player to transfer to CU, following Sanders, known as Coach Prime, who coached the Tigers the past three seasons. Several former JSU assistant coaches are coming to Boulder, as well.

“For me, it’s because of course coach Prime and then my whole coaching staff really went over there,” Brown told BuffZone. “I’m going where the coaching staff already knows me, knows what I can bring to the table. If I go anywhere else or stay, I would have to prove myself again to a new coaching staff. The coaches know what I’m about.”

Football wasn’t his only motivation, however.

“From an academic standpoint, everybody’s not gonna go to the league (NFL), but that’s definitely my plan A,” he said. “But my plan B is pursuing a career in electrical engineering and Colorado has the No. 19 engineering program in the country. It’s definitely a big pro of coming to Colorado.”

Brown, a three-star recruit coming out of Gadsden County High School in Carrabelle, Fla., in 2021, played sparingly as an inside linebacker at JSU as a true freshman.

“I didn’t play as much. I was more so a special teams player,” said Brown, who had six tackles and a sack in seven games in 2021. “Last spring coach Prime talked to me and he said, ‘Hey, I think you should try out being an edge player.’ I listened to him, trusted him through the process and the coaches helped me out. I trained with them, busted my behind and got pretty good at it.”

This season, playing on the edge for the first time in his life, Brown finished with 47 tackles, 10 tackles for loss, six sacks, three quarterback hurries and two forced fumbles.

“I loved it. It’s definitely fun. There’s no better feeling than getting a sack,” he said. “I got to learn, changed positions. I’m not gonna say it was always an easy road, but I busted my behind and fought through everything.

“For me, it made me become a better man in the aspect of it made me realize that I can make it through anything. Throw this at me, I can change positions, it won’t matter. I’m gonna still go out and play my hardest.”

Jumping to Colorado, Brown will have to face tougher competition, but he’s ready.

“There is definitely a difference but I think I’m ready for the challenge,” he said.

Although he’s not familiar with CU, Brown should feel comfortable with Sanders, several JSU teammates and most of the JSU staff being in Boulder, as well.

“It’s gonna be like a family reunion,” said Brown, who will enroll at CU next month.

Payne is a 6-foot-3, 308-pound defensive tackle who has one season of eligibility remaining.

This season, he played in 11 games, with one start, recording 10 tackles, 5.5 TFLs and two sacks, including one in a 29-6 win against Washington State in the Jimmy Kimmel L.A. Bowl on Dec. 17.

CU has 34 players in the 2023 recruiting class, including 16 four-year transfers. Arizona State, with 18, is the only team with more transfers than the Buffs. No other team in the FBS has more than 11 transfers.