Anthony Mundine, who declared his retirement from boxing after being knocked out in the first round of last month's horribly one-sided loss to Jeff Horn in Brisbane, now says he is seeking a re-match.

Despite plenty of standard pre-fight bravado, the 43-year-old Mundine lasted just 96 seconds in the ring against his much younger opponent, falling to the canvas from a Horn left hook and unable to regain his feet. 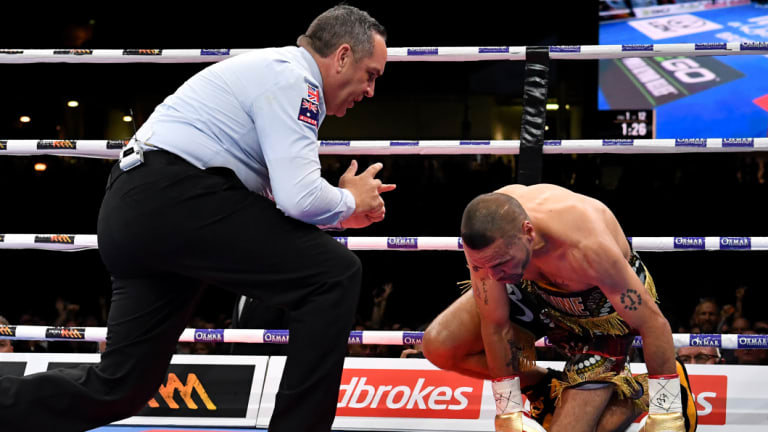 Sucker for punishment: Anthony Mundine is counted out after being felled by a Jeff Horn left hook. Credit:AAP

A former three-time world champion, the performance proved what many suspected – that Mundine was finished as a fighter following his 57th appearance in the ring.

But "The Man" has declared he still isn't done donning the gloves.

"I can’t go out like that. Period. I thought it was going to be over after this one, too. But when something happens like that and you’ve had time to reflect on it, you’re like, 'Man, just give me another chance,'" Mundine told Fox Sports.

"I don’t want to die wondering, man. Just give me one more shot.

"I think people power can make this fight happen. If you guys start talking and start ramping it up … I believe I can win. Some of you might think I’m delirious or what not but that’s fine, I’m cool with that, because of what happened."

From former world champion Horn's perspective, beating Mundine was considered critical if he was to regain his standing in the boxing world and give himself a shot at further title fights.

It remains to be seen what his response to Mundine's plea will be, but the former rugby league standout is adamant he can beat the 30-year-old Queenslander.

"I know what I can do. I want to give you two for one. Two for one meaning you’re going to get two shows for the price of one."