Ryan Strome, Pavel Buchnevich and Chris Kreider also scored, and Alexandar Georgiev made 44 saves for the Rangers, who had lost two in a row.

Vesey found a loose puck during a scramble in front at 5 minutes 17 seconds of the third to break a 2-2 tie. It was his first goal since Feb. 27.

“Regardless of the situation, everything feels better when you are winning, the mood is light and everyone is having fun,” Vesey said after the Rangers’ first regulation win since March 9. “I don’t think that’s the prettiest game we have played all year, but that’s a good team and will take the win.”

Kreider, who missed the previous three games with a lower-body injury, added an empty-net goal with 8 seconds left for the Rangers.

Vladimir Tarasenko and David Perron scored for St. Louis. Jordan Binnington stopped 20 shots in his third regulation loss on the road this season. The Blues fell to four points behind Winnipeg and Nashville, who are tied for first in the Central Division. St. Louis remained two points ahead of fourth-place Dallas.

Strome scored his 17th goal of the season when he found a loose puck in front of the net at 2:22 of the period. Mika Zibanejad helped tie it when he delivered a cross-ice feed to set up Buchnevich for a one-timer at 3:42. It was Buchnevich’s seventh goal in March and 19th this season.

“It was a winnable game, and we didn’t win it,” Blues Coach Craig Berube said. 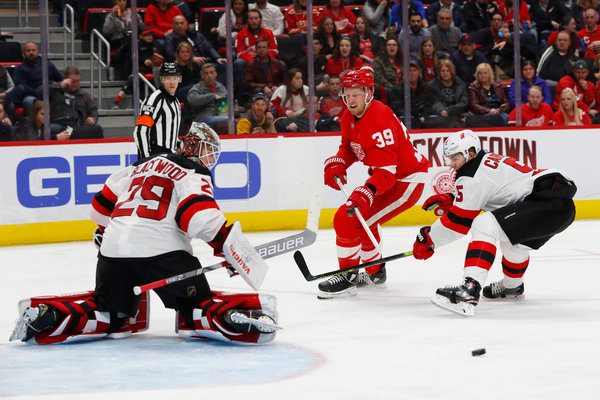 RED WINGS 4, DEVILS 0 Jonathan Bernier and Jimmy Howard combined for a shutout, Tyler Bertuzzi had a goal and two assists, and host Detroit topped the Devils for its fourth consecutive victory.

Bernier made 21 saves in the first two periods before leaving with an upper-body injury. Howard stopped seven shots in the third period to complete the Red Wings’ sixth victory in their last seven games.

Dylan Larkin and Danny DeKeyser each had a goal and an assist, and Andreas Athanasiou also scored for Detroit.

Mackenzie Blackwood made 29 saves for the Devils, who had won two in a row.