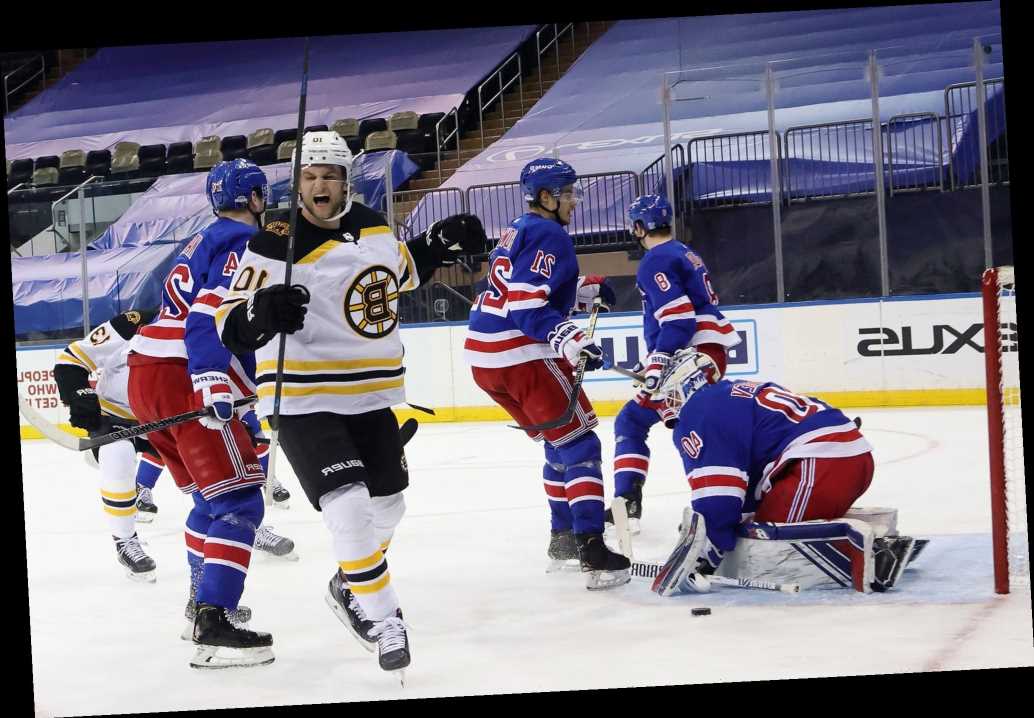 This is a big step toward normal for New York sports

One veteran emerging as Rangers’ true captain in tough season

Rangers are wasting one of their greatest assets

The Rangers hung with the red-hot Bruins until the very end.

The Rangers forced overtime, but Brad Marchand ultimately secured a 3-2 win for the Bruins with a nifty move to beat netminder Alexandar Georgiev 36 seconds into the extra period.

The Rangers, in their first of eight meetings with Boston, which entered the game tied with the Flyers for first in the East with 18 points, managed to keep their heads in it after Anders Bjork broke a 1-1 tie nine minutes into the third period. Kevin Rooney battled it out in front of Boston’s net roughly 2 ½ minutes later and batted the puck past Bruins goalie Tuukka Rask to tie the game up once again.

Referees reviewed the goal for a possible high stick by Brendan Lemieux, but the call on the ice stood.

The Bruins’ last — and only — loss in regulation this season had come on Jan. 18 against the Islanders.

The Rangers were forced to play nearly the entire third period without their top point producer, Artemi Panarin, after he appeared to be skating gingerly at the end of the second. The star winger, who currently leads the team with 15 points, returned for the Rangers’ power play near the end of the third.

Entering the final 20 minutes tied 1-1 for the second time in the last four games, the Rangers were saved by a bouncing puck just over five minutes in when Jake DeBrusk’s shot from the slot went bar down and out. The shot was reviewed and the no-goal call on the ice was upheld when the review showed the shot hit, but did not cross, the goal line.

Mika Zibanejad broke through for one of his most productive games so far this season, getting robbed by Rask on two separate occasions in the middle frame and registering four shots.

Julien Gauthier notched his first NHL goal at 13:50 of the first period, burying a pass off the net from Brendan Lemieux to put the Rangers ahead 1-0 with the only goal of the first 20 minutes. Entering Wednesday’s matchup, the Bruins had only trailed after one period three other times.

Boston quickly regained control of the game in the second, pouring on the first five shots and outshooting the Rangers 19-14 by the end of the period. After Craig Smith was called for slashing Ryan Strome, Zibanejad nearly gave the Rangers a two-goal lead, but it was gloved by Rask.

Just over a minute later, Panarin gave the puck away at the top of the zone and Chris Wagner registered a shorthanded goal to tie up 1-1 at 9:41.

Rask stifled another quality opportunity from Zibanejad on a shorthanded breakaway later in the second.