Transferred Tamworth meeting on Good 4, with rail out 5m from 800m to winning post.

Good even staying battle to start, and Armidale-trained 2. Rage Against won two straight at home including the Spring Cup before even efforts at Muswellbrook and Newcastle. Drawn to get a soft run behind the speed and will be hard to hold out. 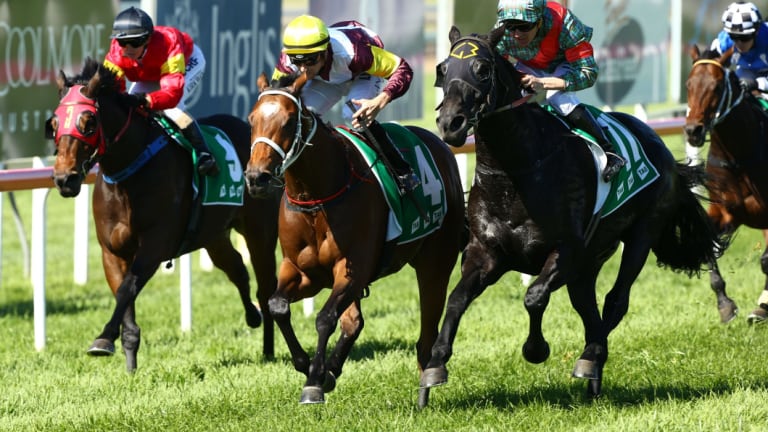 There are several tight ones on an eight-race card at Scone today.Credit:Bradleyphotos.com.au

Dangers: Stablemate 1. Exilia Miss continues to improve up in trip and hit the line hard in the Diggers Cup at Inverell, and the 3kg claim is pivotal while the winner of that race 3. Baroque Girl is again well placed with the rider’s claim and suited by the extra distance.
How to play it: Rage Against to win and box trifecta 1-2-3

Looks the right race and track for local mare 7. Philadora third-up this prep. Has found the line nicely last two from well back and gets a cosy run from the good gate.
Dangers: Newcastle filly 2. Stella Sea Sun from leading stable was strong on debut this track but has a big weight second-up while stablemate fillies 4. Nzuri Mwali and 5. Rizzoli have both been given plenty of time at the trials. Keep a big watch too on resuming Tamworth mare 6. Currabub who was well beaten at her only previous start back in April, but hails from top yard and is out of a mare by leading speedster of her time Final Card.
How to play it: Philadora to win.

Wide open affair for the boys, with a stack of first starters, and all but one are geldings. Beautifully bred Scone-trained 4. Free Rider (by Animal Kingdom out of a Charge Forward mare) has looked good in two home trials, ridden out from well back in the most recent, and will be suited on the big stretch.
Dangers: Newcastle-based 2. Derby Star (Starcraft x Enemy Dragline by General Nediym) won a recent trial sitting wide all the way but was ridden out under the whip while I was very impressed by the trial run of big-striding Tamworth-trained debutant 7. The Sparkle Legend (Polanski x No Sparkle Leica by Strategic) which found the line nicely under a hold.
How to play it: Free Rider and The Sparkle Legend both each-way.

Mudgee mare 3. Meraki Miss just missed at Dubbo last start under a big weight and looks supremely suited from an inside draw.
Dangers: Wyong-trained 1. Phuket has been mixing it against stronger in town and was good from off the speed two runs bac while former Victorian 5. Strictly Legit didn't fire first-up for new Tamworth trainer, but expect big improvement second-up from a good draw and on more suitable track.
How to play it: Meraki Miss to win.

Another tricky battle, with several hopes. Newcastle-trained 8. Elcano resumed with a handy closing effort this track and will improve again up in trip under the same weight.
Dangers: Newcastle four-year-old 2. Finucane Missile is yet to run a place from seven starts, but don’t be fooled. His two runs back this prep have been solid in races with more depth, and is suited on the big run in. Expect improvement too from Newcastle mare 10. Power Transformer back in grade after being outclassed on debut at Canterbury.
How to play it: Elcano each-way.

Again plenty of chances, but lightly-raced six-year-old 1. Moobi scored a dominant win for us this track last start and can do it again from an inside gate. Weighted to his best, but rise to the mile fourth-up is ideal.
Dangers: Local mare 4. Hi Lizzy will also enjoy the extra trip third-up and despite the wide gate look for her to be rattling home while another local 5. The Debater is very consistent and well in at the weights after the claim. Promising Newcastle filly 6. Power Of Wexford won on debut and then finished off OK from midfield behind Moobi. Still improving and carries 1kg less here.
How to play it: Moobi to win and box trifecta 1-4-5-6.

Competitive race, and a nice little drop back in trip off a four-week freshen-up looms as the key for Wyong mare 11. Miss Redoble which won first-up at Cessnock before being pushed out to 1500m. Gets in just 2kg over the limit, with senior rider sticking fourth-up.
Dangers: Gunnedah-trained 3. Epic Decision is building towards a win finishing hard in a similar race at Dubbo two back and then chasing home the talented Mick The Hat while 2. Iwatani has consistently finished on behind the placegetters in tougher grades and looks well placed here despite a sharp rise in weight.
How to play it: Miss Redoble each-way and box 2-3-11 in exacta.

An open contest to finish, but sticking with Newcastle-trained 4. Lawnmeet despite disappointing in a BM58 at Kempsey last start, although wasn’t suited inside horses. Showed ability winning second-up at Coffs Harbour, and gets nice weight relief here after the rider’s claim.
Dangers: Tamworth-trained 1. Schappose powered to the line in two runs earning him a start in a stronger Rosehill Highway where he was beaten under two lengths. Has the class, but must overcome a big weight and wide barrier. Gosford-trained 3. Through The Cracks is a big strider with ability and closed off nicely in a recent trial, but may just need the run while 5. Off The Dial has hit the line hard from well back in his last two and is also well weighted with leading rider jumping aboard.
How to play it: Lawnmeet each-way and box trifecta 1-3-4-5.