12. Super Oasis appeals at each-way odds on debut in a tough race with a lot of trial form. She’s only appeared once and attacked the line strongly from well back to win, showing some promise. Drawn wide but there looks good speed and expect her to be charging late. 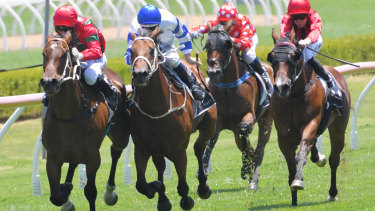 Back in action: Kolding is among the hopes in the last event on a seven-race card on the Kensington track.Credit:AAP

Dangers: 3. Escaped has led or been right up there in both trials and was too speedy winning his latest at Randwick a little over a week ago. Ridden out to win that trial and from the inside alley you can expect him to be prominent. 9. Just Zerene was bloused late after leading and being pressured a bit at Canterbury at her second start. She’s come with some raps on her and while drawn out a bit if those raps are warranted she is entitled to be in the finish. 2. Cardiff trialled brilliantly before making debut as a short-priced favourite but ran last in a four-horse field behind Golden Slipper favourite Tassort. Not a bad trial ridden conservatively recently and he is worth keeping safe.
How to play it: Super Oasis each-way.

All eyes on 5. Trope which is a well-bred colt on debut and he’s been well trialled up for this with three hitouts in the last month. The latest was particularly impressive up to 900m as he raced away late. Not too concerned about the tricky gate, he looks promising and should run well.
Dangers: 9. Got Your Six has had the measure of a stakes-placed filly in her two recent trials and you’d think she will press forward from the outside. There looks to be a bit up her sleeve in her trials and she commands some respect. 1. Flying Legend took on a couple of strong maidens on wet tracks in his two starts in October and he wasn’t entirely disgraced despite being safely held. Given some time and a recent trial he can’t be left out having drawn the inside. 10. Lagarde has been costly with a string of placings to her name, the latest beaten as an odds-on favourite making it nine placings from 10 starts. No easier here but the blinkers go on so she’s worth including.
How to play it: Trope to win.

5. Bring The Magic was beaten fair and square at Canterbury last time but fits in well in this race at the weights. Finished strongly to win on this track first-up and if there’s a reasonable tempo here she will have her chance to hit the line from the back again.
Dangers: 2. Toryjoy was arguably a shade disappointing when beaten at Randwick on Australia Day after leading. The winner sat outside her and had her measure. That said, she races well on this track and is entitled to another chance. 7. Zourhea beat one home first-up but it was far from a bad run as she ran home nicely in a race not run overly fast early. She will appreciate the extra ground here and if they overdo it up front she’ll come into contention. 1. Final Zero wasn’t far off Toryjoy two starts back then appreciated a softer track when leading most of the way at Warwick Farm. Back against the mares and the claim helps. Has claims.
How to play it: Bring The Magic to win, quinella 2 and 5.

4. Mr Dependable might hold the key to this race from a tempo angle and he’s also looked pretty handy in winning his only two trials. Distance suits on debut looking at his breeding, he should look to lead and if he lands there without too much effort he will take running down.
Dangers: 10. Loves To Rock looked an improver out of what was a promising trial at Randwick recently where she settled back and worked home nicely through the field into second. Each-way claims. 2. Altair can’t be overlooked coming through the Magic Millions maiden first-up where he was in the market and held his ground. Nice trial since and is right in this. 3. Final Award hit the line nicely late on debut at Canterbury behind Kolding. You'd think the extra distance would be in his favour and he's drawn nicely again. Likely improver and an each-way hope.
How to play it: Mr Dependable each-way.

5. See The Master is bursting to win a race and he looks to have landed in one that suits him. Four runs back have all been at 1550m at Canterbury and he’s finally up in distance and into a race with a bit of tempo engaged. Liked the way he hit the line last time and is entitled to feature.
Dangers: 4. Salsa Man is an up-and-comer which swept home to win second-up at Wyong over a mile. Measured up OK in two-year-old company in town last season and looks to have come back well. Definite chance. 1. Rapido Chaparro disappointed after leading as favourite and folding up at Canterbury. Impressive winner over a mile before that and while he has a big weight again he has trialled well since his flop and if he gets control could take catching. 8. Saint Katarina has been around the mark without winning one of late, good effort two starts back but a bit plain last time when she didn’t come into the race at all. One of those horses you have to throw in.
How to play it: See The Master to win, trifecta 5/1,4,8/1,4,8.

8. Tchaikovsky is another three-year-old with group form at two coming back in class first-up and it’ll be interesting to see how he shapes up. Blinkers went on for his second trial and he looked good beating Sandbar. While 1000m may be a touch short there should be some speed on and he’ll have his chance to finish off.
Dangers: 1. And So It Goes sprinted very sharply to score in a similar race at Warwick Farm first-up from a spell and there’s no reason she can’t repeat the dose if things go her way. They don’t always. Logical threat. 6. Star Of The Seas is another probably not suited to 1000m but he is handy and has trialled OK. Where he gets to in the run is in some doubt from the outside gate as he tends to race forward but rather include him than doubt him. 3. Raiden was never going to win in a sit-and-sprint first-up with 61kg but he did run on well and the form has held up OK with All Too Royal winning again. Fitter and blinkers go on so he has to be considered.
How to play it: Tchaikovsky to win and trifecta 8/1,3,6/1,3,6.

7. Foreign Territory is a horse that you know will go forward and give you a sight first-up at 1400m. He was beaten on debut as favourite but that was 1100m then he romped in over this course. Trials have been spaced but both excellent and he’s the horse they’ll have to run down.
Dangers: 9. Desert Lord got back in a race controlled by the winner and only finished fairly beating two home. He trialled too well before that to let him go and he’s always promised to be at least handy. Extra trip is a plus and he’s entitled to consideration. 14. Kolding comes off a maiden win first-up but he did finish with plenty of purpose over 1200m to snare the win. He has form around some nice horses from last time in and can only appreciate the extra trip. Keep safe. 1. White Boots has an outstanding record and while he stretched out to a staying trip last time in has to be respected fresh at this distance. Won both trials in nice fashion and drawn well. He’ll likely run his usual honest race.
How to play it: Foreign Territory each-way, quinella 7 and 9.