Prepared to forgive 6. That Song his last start failure at Randwick where he was slowly out from a wide gate and worked hard to be on the speed. Naturally he dropped out. Previous effort when second to Nordicus is good enough to take this out. The horse to beat. 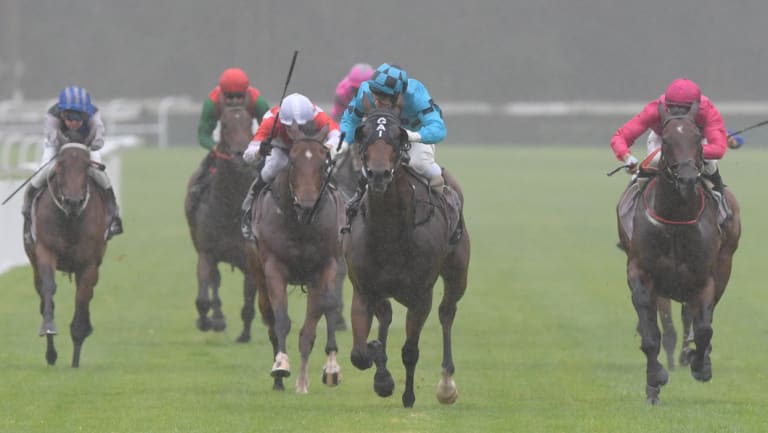 Get on: There will be eight races at Gosford today.Credit:AAP

Dangers: Consistent 7. Impurity is getting close to a win and almost stole it when nosed out at Wyong over this trip last start. Can’t fault her of late and she is a very good chance. 9. Nivalis is another who wouldn’t be far off a win with placings at her last couple at the Newcastle 900m. She seemed to have her chance last time and has an extra 200m here but can’t be left out. 2. Magnifica showed some promise early in his first preparation but was a bit plain in his last couple before a spell. Hit the line well on debut and is sure to be running on here.

7. Transmitter was expected to win when she resumed at Kembla and she was dominant in scoring over the 1000m on a wet track. Of course she’s back onto dry ground but with gate one she’ll enjoy a nice bit of cover. If she can repeat the performance she’ll take plenty of holding out.

Dangers: She was outclassed in a stakes race before a spell but 5. Dreamy Belle showed she’s back in good order with a solid trial win at Newcastle recently. She has won fresh and her form last time in was consistent. Hard to beat. 4. Gunnaza has been racing well without winning over  short courses and will give his usual honest sight here. Every chance at Muswellbrook last time but as an on pacer this track will suit. 2. Four More Millers is an interesting runner. He won five races last time in at various venues and, while this is a tougher task, he comes off a Newcastle trial win and is in well with the claim. Could surprise.

How to play it: Transmitter E/W.

7. Laguna Mountains looks an up-and-comer and there was plenty of merit in his maiden win at Goulburn. Well supported there too and finished strongly after enjoying a nice run just off the pace. If he can land on the speed from the wide gate he’ll hit the front on the bend and be hard to catch.

Dangers: 2. He’s Imposing made hard work of it but broke through for a popular maiden win at Hawkesbury over the mile a couple of weeks back. He could be looking for further now but is right in this. 3. Wokurna survived a protest to win at Hawkesbury second-up and the runner-up has since won. Possible leader from the outside gate and is up in distance so will need the breaks. 4. Beauty Kanas is another on pacer and she was cut down late over this course last start. Rarely too far away and while she’s only won once in 12 starts she can’t be left out of the main chances.

How to play it: Laguna Mountains E/W.

4. Stock Up is racing in career best form and proved that with a game fourth in a strong BM78 at Rosehill third-up. The mile shouldn’t worry her. An impressive winner at both previous starts and back into this class she’s clearly the one they have to beat.

Dangers: 1. The Cartoonist scored an overdue Kembla win before being outclassed at Rosehill a couple of weeks ago. Much better placed in this grade and while no claim is taken here he’s entitled to another chance. 2. Weekend Affair is always around the mark and he also claimed a deserved win when just lasting at Canterbury. Certainly no harder here and, while up in weight, he’s one of the main chances. He does tend to leave his charge late, though. 6. Sensacova hasn’t done a lot in two runs back from a spell but she’s better for the step up in distance into her last run and if she’s going to find form this prep it’ll be in this sort of race.

3. Swelt signaled he’s in for a good preparation with his first-up second at Hawkesbury behind a promising type. He didn’t give up the chase and was going as well as the winner on the line which bodes well for this. Drawn to have the right run and is entitled to go close.

Dangers: 1. Montana Thunder attracted plenty of support second-up and ran on without threatening at Hawkesbury. That followed a solid debut when cut down late at the same track. Sure to be around the money again. 10. Eveleigh didn’t do much on debut at Rosehill but that was a year ago so she’s here with a clean slate. Two trials back have been handy, especially the second, and she could show up. 11. Montalis was a drifter in betting on debut at Newcastle in a 900m scamper and wasn’t beaten far but she didn’t make an impact either. Expect the extra 200m will be in her favour and she could be a big improver.

8. Time To Rethink has put two improved runs together and might be close to a win now. Kept running on when placed at Hawkesbury last start and drops to a maiden here. No good thing but has strong each-way claims at least in a wide open race.

Dangers: 10. Man And Superman is up quickly in distance after leading and boxing on evenly over a mile at Goulburn at his second start. In the right stable to be trying it and will likely lead and give a good account. 4. Triplicate is fitter for two runs back from a spell and while no match for the first two home he stuck on okay over a mile at Wyong. Can only be fitter and expect the extra distance will suit. Can improve. 3. Regal Rage mixes his form but he has been in the market at his past two starts and this is certainly no harder. Go on his third at Hawkesbury three starts ago and he has to be considered.

How to play it: Time To Rethink E/W.

3. Gogoldcoast will start a short-priced favourite after he downed Kapajack, a Rosehill winner since, in his only trial appearance a couple of weeks back. He did a good job in that hitout and has drawn well enough. If he runs up to his trial then he’s clearly the horse to beat.

Dangers: 1. Battle Cry ran a fair race on debut back in September and has been gelded since that run. Two trials to prepare and was a narrow winner in the latest. Blinkers go on as well and he looms as a serious threat. 8. Efficiently held her ground at her only start back in July but there was some promise in her second trial so she could be an improver here. Watch the market for a lead. 11. Lonely Heart has trialled up pretty well for her return. She was in the market on debut and was outsped. Scratched from Canterbury last week for this and has an each-way hope.

3. All Too Free sat back and unleashed a smart finish to win running away at Hawkesbury third-up and a similar tactic would see her hard to hold out. All three runs back have had merit, kept fresh and there’s no more depth in this race than what she beat last time. Good chance.

Dangers: 6. Sophiella has disappointed in two runs back as favourite and will appreciate a class drop. She had every hope last time on the Kensington track, kept fresh and she gets the chance to find her best form. 4. Oxford Angel did a big job to come from near last and arrive in time over 1200m here last start. Drawn well so may not get so far back and she has to be included in the main players. 2. Wander is ex-Godolphin and hasn’t trialled publicly since his last run back in July. Blinkers are on and he has a placing to Easy Eddie at Randwick in his form from this year and with an inside alley he could show up.