2. Final Award is a promising type and looks the winner after his impressive victory a week ago at Randwick. He was strong at the end of 1400m there so a mile should be no issue for him, you’d expect him to round up his five rivals but he’ll be a short price. 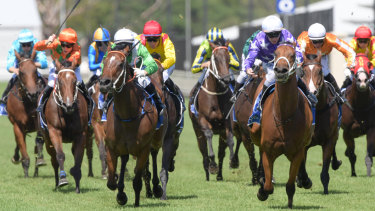 Fantastic Farm: Action is back at Warwick farm today.Credit:AAP

Dangers: 5. Helga could be a danger to the favourite, she won a good form race two starts back then not a lot of luck behind Cossetot at Canterbury a month ago. Kept up to it with two trials, she’ll be in or near the lead and can give some cheek. 1. D’Grammy is up from Victoria and wasn’t disgraced in a handy field at Caulfield before having every chance behind the leaders at Sandown. Well in with the claim so he has to be considered. 4. Seles has taken on some handy three-year-olds at her last couple of starts and her run two back was sound behind Vegadaze. A good track will suit her so keep in mind.

15. Zouriana gave away far too much start on debut behind Dawn Passage but she kept finding the line over 1000m. Much better scenario for her this time. She’ll be improved having just the one trial before her first start and she’s a good each-way chance at least.

Dangers: 7. Enood has some strong form around her two starts, she was run down by Lyre last start and on debut ran on from near last into second behind Jedastar. If that form holds up then she’s a big threat, just need some luck. 14. Still Single tackled the Widden Stakes on debut and she ran well without looking a threat at any stage. Nicely drawn and if there’s upside to her she has to be in the finish somewhere. 3. Colada trialled okay before having no luck at all at his debut behind Dawn passage. Not sure where he would have finished but it would have been closer than 10th. Drawn wide but that’s not such a big deal at 1200m on this track. Keep in mind.

How to play it: Zouriana each-way.

5. Fluidity is the horse on the way up and she comes off a very impressive win at Wyong a last month into a winnable race. Made a long run from last and kept going, drawing away late. If she continues in the same vein then she’ll go close to making it a hat-trick.

Dangers: 1. Dusk Falls went too hard in front at Randwick but back here last time he was game in defeat when run down by Gayatri over 2200m. Whether the wet track helped him remains to be seen and he was $31 but a repeat effort sees him in the finish. 3. Allcash can never be left out of a race like this, he bobs up now and then in the placings but definitely doesn’t win out of turn. Distance suits him now after four runs back so if he is going to fire it could be here. 8. Front View is racing consistently and finally broke through two starts ago before battling hard when narrowly beaten at this trip at Kembla. Each-way.

How to play it: Fluidity win.

3. Stephan covered plenty of extra ground when he resumed with a close second at Canberra, run down in the closing stages. Fitter for that and he was competitive in this sort of company last time in. Missed a place just once in nine starts, and that was a fourth, and he’ll give another good account.

Dangers: 1. Rebel Miss went for home before the turn and was left a sitting shot when runner-up over this course a couple of weeks back. She needs to be hitting the front at the 50m not the 450m. Hard to leave her out as it will work out for her one day. 5. Witherspoon is the likely leader she’s been game at 1100m at her past couple when leading but finding one or two better. If she gets an easy sectional or two she’ll prove hard to run down but she can’t seem to find the post at the moment. 7. God Of Thunder has ability but mixed his efforts on the track to date. Easy winner in a small field before a spell then trialled nicely between Brutal and Coterie at Rosehill. If he brings his A-game he’s hard to beat.

How to play it: Stephan each-way.

8. Our Rosemaree was freshened up after winning successive Highways and dropped to 1000m for a luckless fourth at Warwick Farm on January 28. Only a small field there but she became badly wedged late and may have gone close with a clear run. Much better off at 1300m and she’ll take holding out.

Dangers: 3. Common Purpose is the logical horse to beat after a super first-up win at Canterbury. Barrier one could be a bit sticky for him if Saturday’s meeting is any guide but he’s very honest and will be very hard to stop. 7. Pierino was unsuited fresh at 1100m behind the flying I Am A Cool Kid but he held his ground finishing midfield. All his good form is around the 1400m mark so expect a big improvement from him from a perfect draw. Must include. 6. Fun Tickets is another improver on his first-up effort at this track. Whether he wants a bit more than 1300m is the question, but he was strong on and through the line fresh and is unbeaten second-up. 12. Syd’s Footprints is way back in class on his effort at Randwick. Promising horse who can give a sight up on the speed.

How to play it: Our Rosemaree each-way.

3. Archedemus is the current Provincial Championships favourite and he can shorten a point or two with a first-up win here. Dominant in his last win in December and he was fitted for a return with an impressive trial win over 1200m just over a week ago. On pacer who will be the one to catch in the straight.

Dangers: 6. Frankely Awesome was thrown into a Group 1 at her third start and wasn’t quite up to it but also wasn’t disgraced. Won her first two starts impressively and it’s a matter of whether 1300m is a bit sharp fresh. Hard to get a line on her from the two trials so be guided by the market. 7. McCormack has plenty of raw talent but does a few things wrong. It hasn’t stopped him winning both starts to date and he was only getting warm at the end of 1000m last week. Quick back up and a rise in trip but he’s hard to ignore. 9. Aliferous found the line strongly late fresh at Canterbury, she might want it a bit further now but has the run under her belt and is sure to be finishing off nicely again.

4. Soul Star has been costly down south but she is consistent in city company. Ran on well two starts back then seemed to have her chance at Sandown last start. Perhaps the change of scenery is what she needs, she has the in-form apprentice on board and a wide open race. Surely she has her shot.

Dangers: 11. Our Revenue did a very good job to run second behind Koonunga at Canterbury given the winner led and she came from last. Racing well without winning at present and is one of the main hopes. 5. Lips ‘N’ Lashes is back in town after a couple of confidence boosting country wins. Probably could have been a bit more impressive at Tamworth last time but at peak now and drawn nicely. Go well. 2. Verlan came from well back to win second-up then led at Canterbury and couldn’t sustain it, dropping off late but only beaten a couple of lengths. Likely to be prominent from the inside and is worth another chance.