Mitchell Starc has tipped the MCG curator will deliver a Boxing Day "surprise" as the home of cricket prepares to face its moment of truth in next week's blockbuster Test.

Melbourne Cricket Club curator Matthew Page has worked feverishly to have the drop-in pitches regain life this summer after the venue became the first Australian ground to be slapped with a "poor" rating by the International Cricket Council when only 24 wickets fell during last year's Ashes draw. 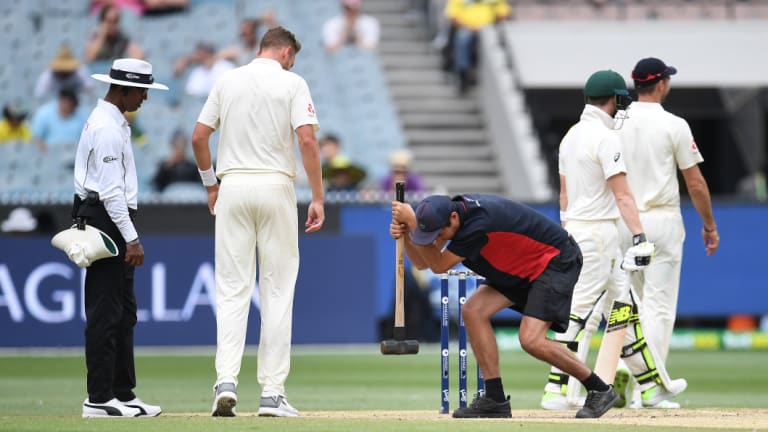 Under pressure: The MCG pitch failed to impress in last year’s Ashes Test.Credit:AAP

MCC chief executive Stuart Fox has said it's likely to take up to three years to have the decks providing the ideal clash between bat and ball but Ashes hopeful and NSW bowler Trent Copeland said he liked what he had seen during the Blues' Sheffield Shield clash against Victoria this summer.

There had been speculation among Shield teams that if there had not been any improvement through the Shield matches then next year's Boxing Day Test at the venue may have been under threat.

Copeland revealed about 14 millimetres of grass had been left on the pitch – 4mm more than is customary in a Shield clash – and this had worked a treat despite the Blues losing by an innings and 107 runs when Test opener Marcus Harris crunched an unbeaten 250.

"The big thing we have noticed from previous years is they had made a concerted effort to acknowledge that the wicket hadn't been up to scratch," he said.

"This time they left 14mm of grass on the square and I think they took the Adelaide Oval approach of, when they went to pink-ball Test matches, and left a bit more grass on it, they figured out the wicket was a really good cricket wicket.

"They have been willing to acknowledge in Melbourne – 'let's try a few things'. Certainly for our game, it looked like a raging green seamer and it did seam around on day one, in particular. It turned into a nice batting wicket and it seemed to not deteriorate as much. It certainly doesn't spin anywhere near as much as it does in Adelaide."

Copeland said the Blues had rated the pitch as good.

The drop-in MCG decks, the oldest in the land, have been a source of frustration in first-class cricket for several years but there has been work done to the soil and its moisture levels when nursed through the winter at nearby Punt Road.

They have also been dropped on a layer of sand at the MCG in a bid to ease their hardness because they had become nothing short of a rock-hard "road".

Victoria have also played draws against South Australia and Western Australia, the latter on what coach Adam Voges said was a "pretty flat" deck.

Starc missed last year's Boxing Day clash through injury when Alastair Cook, until that point struggling for a run, delivered an epic 244 off 409 balls, adding to frustrations about the pitch.

As the Australians headed to their home ports for three days, having knotted the series at 1-1 against India, Starc said he was unsure what to expect in Melbourne.

"I didn’t play last year. I had to watch from the side and it didn’t do a thing for five days so, hopefully, they’ve sorted it out," he said.

"It sounds like they’ve been trying a few things with the Shield cricket there in the first few rounds.

"I think it may be a surprise, what they actually dish out next week, but I think we’ll just sort of review this week and enjoy a moment of reflecting on the hard work we’ve had to do this week and then we’ll focus on Melbourne when we get there."

Copeland, also a commentator on Channel Seven, was confident the curator would deliver a well-balanced deck to ease any concerns about the venue's position in Australia's Test cricket pecking order.

"I don't know the ins and outs of that but, at the end of the day, no one wants to see, including the groundsman, what happened last year in terms of the game and how it transpired, to happen in the future. We all love the Boxing Day Test and no one wants that to change," he said.

"We rated it [the pitch] good and we got beaten by an innings. From the perspective of cricket, it wasn't too hard for one team and not the other. We thought that was progress – a step in the right direction."