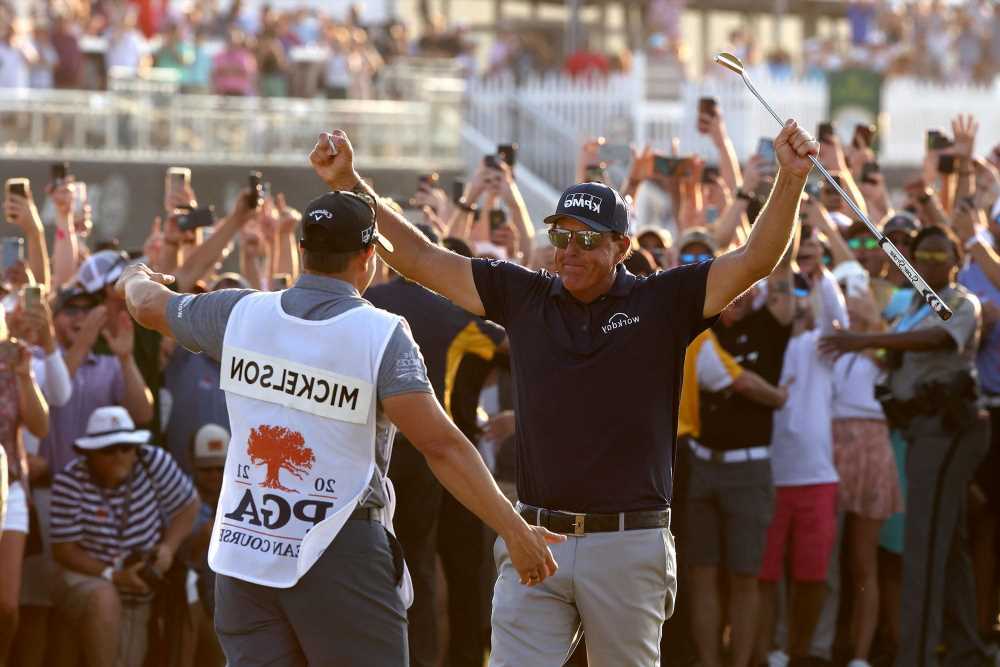 Phil Mickelson will bring the drama in his chase for history

Who was it that said Father Time is undefeated and untied?

In the case of 50-year-old Phil Mickelson, he’s 1-up on the mythical buzzkill geezer after Sunday’s stirring PGA Championship triumph at Kiawah Island.

Mickelson’s victory, his sixth career major championship title and first in eight years, was a flip of the bird(ie) to Father Time.

This wasn’t supposed to happen, a 50-something without a Top-20 finish in a major championship since 2016 and prone to more than his share of calamity on the golf course (his nickname isn’t “Phil the Thrill’’ for nothing), winning a major championship and making history as the oldest player to win a major in the history of the sport.

And: Doing it on a severe golf course that presents more trouble than the Belt Parkway at rush hour on a Friday.

How has Mickelson been able to bamboozle Father Time?

There are a number of reasons, beginning with his passion for the game. Mickelson loves to play golf. As simple as it sounds, this cannot be overstated.

It’s rare to come across an athlete who loves playing the sport he plays as a professional recreationally as much as Mickelson does in his spare time.

More golfers on the PGA Tour than you would think don’t embrace playing golf away from tournaments in their spare time. It’s a job to them, makes them a lot of money, but still is a job.

Mickelson sometimes comes across as a guy who’ll jump into an afternoon game with a couple of guys he met at the local coffee shop.

That, along with the great genes that have kept him healthy his entire career, has kept him young.

So, too, has his constant desire to tinker — whether it’s with what he’s doing physically, with his diet, his equipment, his putter grip, whatever. Mickelson lives his life in a constant state of curiosity, in pursuit of anything that he thinks can better his game or his life.

It stimulates him intellectually and emotionally and is a big part of making him one of the most interesting people in the sport.

“I hope when I hit that age, I’m still trying to do that, trying to get better,’’ said Collin Morikawa, the 2020 PGA Championship winner.

“His enthusiasm is what keeps him going,’’ Jon Rahm said. “At his age, he has the same enthusiasm I have at 26, and he’s been doing this a very long time. I mean, he’s been on Tour as long as I’ve been alive.’’

Mickelson’s latest passions when it comes to self-improvement have been a fasting regimen in his diet that has included a special blend of coffee that he’s now patented, called “Coffee for Wellness.’’ He, too, has consulted Tom Brady, with whom he’s become friends, on what he does with his diet and workouts to stay young.

Mickelson, like Brady, is from California. They both have unique, if esoteric, philosophies on how to stay healthy and fit and perform at the highest level.

Part of that secret sauce for Mickelson last week at the PGA was finding ways to “quiet my mind and get rid of all the exterior noise.’’

All week at the PGA, he seemed in a Zen-like state. He walked slowly. When speaking to reporters, he was so dialed into the moment that he avoided addressing the possibilities and consequences of what he would end up doing on Sunday, which was make history.

Those State Trooper mirrored shades he’s been wearing of late?

An hour after his win in a quiet moment outside the Ocean Course clubhouse before he would leave the property and fly home to celebrate with his wife, Amy, Mickelson told The Post that he wears those sunglasses because they help him deflect the distractions and allow him “to close my eyes’’ when he needs a moment of calm amid the storm.

We forget that these high-profile star athletes like Mickelson, Brady, LeBron James and (name the superstar) are on camera for almost every moment of whatever event in which they’re competing.

Tiger Woods has lived that fishbowl life from the moment he appeared on “The Mike Douglas Show” back in the day.

There’s no privacy, no quiet moments for these athletes when they’re in the cauldron of pressure in their respective professions.

Mickelson is transparent in admitting that he can get caught up in the madness, which has been a detriment to his performance. So, he made a concerted effort to “quiet the noise,’’ and it paid dividends at Kiawah.

During rounds, while he’s usually chatty with his playing partners, Mickelson was quieter and more to himself than usual, keeping most of his conversations with his brother and caddie, Tim.

To the chagrin of reporters, Mickelson kept post-round interviews short so he could get to the practice grounds to iron out whatever he felt needed fixing after each round.

And by sunset on Sunday, nothing needed fixing for Mickelson — except perhaps a larger shelf at home in California to make room for some more major championship hardware.