The Perth Wildcats made a statement to the rest of the NBL on Friday night with a 100-81 demolition of the previously in-form Adelaide 36ers at RAC Arena.

The Wildcats put on a defensive clinic after a slow start in a game, but also equalled their own top score for the season.

Adelaide scored 32 points in the opening term, but Perth restricted them to just 13 points in the second quarter – and then just 12 in the third.

Their efforts meant Perth held a commanding 21-point lead at the last break.

After beating Melbourne last weekend, it seems the Wildcats have shaken off their mid-season slump.

Although after he sparked his side into action, Mitch Norton did suffer a calf injury early in the second quarter and didn't return.

The win came with a contribution of only 19 points from Bryce Cotton as Clint Steindl (16 points) and captain Damian Martin (18) stepped up. 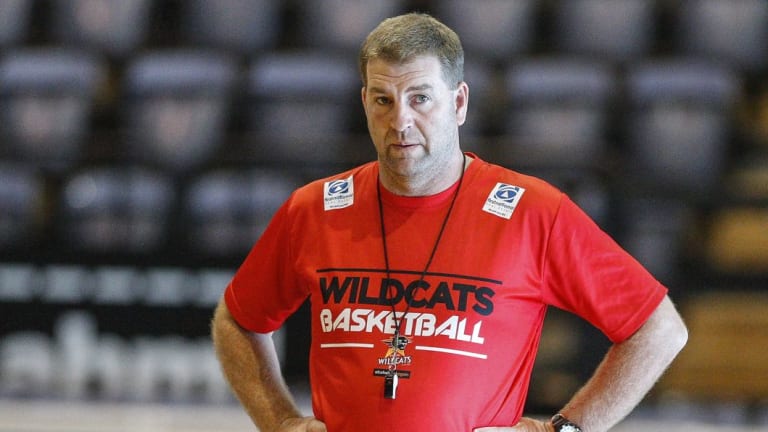 Perth coach Trevor Gleeson has the Wildcats back on track.Credit:Christopher Chan

Coach Trevor Gleeson was ecstatic with his side's performance.

"To hold Adelaide to 81 points was outstanding," he said. "It was a fabulous effort of containing the ball.

"They were on fire. Wiley was on fire. We had to put Nick (Kay) on him. But we were also scoring down the other end, scoring really well.

"Adelaide were on fire, but I looked up and the deficit was only four points."

The 36ers were eyeing a spot in the top four after winning seven of their past nine games and impressed victories over Perth and Sydney last weekend.

But after their promising start, the usually high-scoring Adelaide stars struggled to hit the scoreboard.

Coach Joey Wright said some of his players got a big selfish after their good start, comments supported by Wiley.

"I don't think our togetherness was there tonight," Wiley said.

"We've shown it against Sydney; we played together. When we're not together, that's the result, we lose by 20."

Adelaide will fight to stay in touch with the top four when they host Melbourne United on Monday.

Perth managed to scrap to a three-point lead at half-time. Adelaide had led by nine very early in the first quarter after Wiley knocked down 12 points in the first four minutes of the game.

The 36ers were also well in front of the rebound count at quarter-time.But after being smashed on the boards in the first term, Perth wrestled back some control of the glass in the second.