Captain Tim Paine insists he will be fit to play the second Test after copping a nasty blow to his troublesome finger as selectors consider a reshuffle of the top order after Australia's batsmen failed in the narrow defeat to India on Monday.

Australia's 31-run loss in Adelaide is only the fourth time in 30 years the men in the baggy green have dropped the first Test of a home campaign and has left Virat Kohli's side in the box seat to claim their first series triumph on these shores. 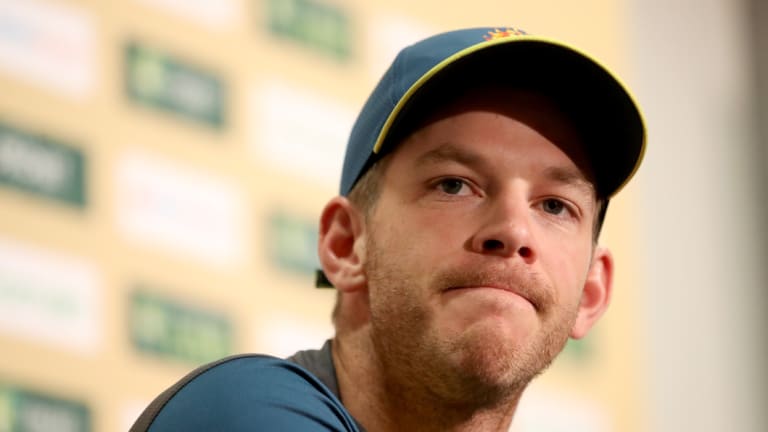 Tim Paine says there is no issue with his injured finger and he will play the next Test in Perth.Credit:AAP

Ominously for Paine's inexperienced team, Australia went on to lose each of those series.

Paine is adamant he is not in doubt for the Perth Test, which starts on Friday, but there were concerns after he was struck on his right index finger in his knock of 41. It is the same finger he has had seven sets of surgery on.

Paine was in noticeable discomfort and sought the assistance of team medical staff. He had his finger strapped, and batted on.

There would be drama for the Australians if the injury is more serious than Paine is letting on and he was not able to play. That could result in vice-captain Josh Hazlewood stepping up as skipper, having only served one Test as Paine's deputy.

Meanwhile, Aaron Finch's days as a Test opener could be numbered after coach Justin Langer indicated a reshuffle of the top order is being considered.

Worries have also been raised over the form of star quick Mitchell Starc, who is struggling to regularly trouble frontline batsmen, though he still has the backing of the team and the skipper.

As impressive as India's bowlers were, Australia believe their fightback is evidence Kohli's attack can be vulnerable in a test of stamina, particularly in the absence of an all-rounder.

The problem, however, is Australia's specialist batsmen were not able to stick around for long enough to capitalise on such scenarios.

The woes start at the top where Finch is under the pump after returns of zero and 11. Langer's faith in the Victorian being able to open at home appears to be wavering after just one game with a move into the middle order a possibility.

Shaun Marsh and Usman Khawaja are the leading contenders to be promoted if a change is to be made.

"You're always looking at your top three to be consistent and backing them in," Langer said on ABC Grandstand.

"We're searching for that top three and if we've got to keep making changes 'til we get it [we will] because we know how important it is for successful teams."

Paine praised Marsh for the character he showed in making a defiant 60, which ended a string of single-digit scores that had placed his position in the XI in peril.

"He's been in great form the last month or so and I think he is really close to cracking a really big score and winning us some games. He'll take some belief out of that."

Australia were honourable in defeat, getting much closer than many had expected.

The end seemed nigh after Paine was the seventh man out in the second over after lunch but Australia's tail wagged with vigour.

Each time it appeared India had landed a killer blow, Australia picked themselves up only to fall just as the momentum turned.

The home crowd dared to dream after Pat Cummins and Starc whittled the target under 100, then cheered every run when Nathan Lyon and Cummins, then Hazlewood, were together.

Lyon and No.11 Hazlewood added 32 for the last wicket but their quest for a famous victory was halted by Ravi Ashwin.

Paine said he was proud of the spirit his side had shown and with their behaviour after a torrid offseason in which Australia's on-field conduct came under scrutiny in the aftermath of the ball tampering scandal.

"I thought today was a nice snapshot of the way we want to go about it," Paine said.

"I thought we fought really hard, never gave in. You don't have to talk rubbish and carry on like a pork chop to prove that."