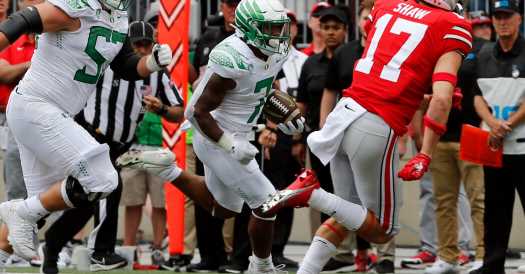 COLUMBUS, Ohio — The Saturday afternoon outlook for the Oregon Ducks, the ones who barely mustered a victory over Fresno State last week, was decidedly poor.

The opponent was third-ranked Ohio State, the Big Ten’s sauntering, swaggering behemoth. The Ducks’ star defensive end, Kayvon Thibodeaux, the man who helped make the Horseshoe magnetic for N.F.L. scouts on Saturday, was hurt. Justin Flowe, a fearsome freshman linebacker, was also out for Oregon, which entered Saturday ranked 12th. In a rematch of the national championship game from January 2015, oddsmakers favored the Buckeyes by more than two touchdowns.

None of it mattered much: Oregon stunned Ohio State, 35-28, at Ohio Stadium. In just the second full week of this season, half of the teams that reached last season’s College Football Playoff have already lost. And the preseason favorite in the Pac-12, which has not had a team appear in the playoff since the 2016 season, cleared the most conspicuously formidable test on its schedule.

Oregon did it with what the Ohio State faithful could have seen as unsettling ease. The Buckeyes never once led in Columbus, where they played before a home crowd for the first time since 2019 and lost for the first time in more than four years.

“It was a game that we were never really in control of,” Ohio State’s coach, Ryan Day, said, adding later that there was “enough blame to go around here.”

Oregon mastered the Buckeyes not with a particularly exceptional offensive onslaught — the Ducks logged 505 yards, while Ohio State recorded 612 — but by steering away from the catalog of miscues and letdowns that defined Ohio State’s day on both sides of the ball.

Three of the five Buckeye attempts to convert on fourth down failed. Ohio State, whose coaches fretted through the off-season about the team’s fundamentals, was assessed 71 penalty yards — more than double Oregon’s toll. Oregon, whose offense was far more balanced on Saturday, scored 28 points in the red zone; Ohio State managed only half that sum.

The scoreless first quarter in Columbus was a deception; inside Ohio Stadium, an unraveling seemed at hand from the game’s first possession, when Ohio State raced for 44 yards and then saw its ambitions undone by two consecutive incomplete passes by CJ Stroud, the redshirt freshman quarterback. The last of them was on fourth down, with seven yards to go.

Oregon, guided by Coach Mario Cristobal and the offensive coordinator Joe Moorhead, faltered on its opening drive. Then Ohio State stumbled again, but pinned Oregon on its own 1-yard line.

The Ducks turned to the ground, where they would ultimately average more than 7 yards a carry, for their first two plays, seizing a dozen yards and all but extinguishing the menace of a safety. Anthony Brown, the senior quarterback from Cliffwood, N.J., fired a pass to Devon Williams, a receiver standing nearly six and a half feet tall, for 19 yards. Travis Dye, a tailback who had carried the ball so efficiently on the drive’s opening plays, caught a throw for 10 more yards.

The Ducks’ largely unchecked rampage continued — on the 10-play drive, just one snap would prove fruitless for Oregon — before CJ Verdell scampered past the goal line.

Ohio State quickly stitched together five plays for 70 yards and a tied game with 8:42 to play in the first half. From there, though, the game became an exercise in trying to determine when Ohio State had met its end.

At one point, it seemed to come with about four minutes to play in the third quarter. Ohio State had maneuvered 67 yards down the field and confronted fourth down with just a pair of yards to go. The goal line was 8 yards away, and Oregon already led by 14.

Day paced the sideline as he gripped his collection of plays with his left hand. Stroud took the snap, backpedaled, dodged a defender and hurled the ball toward the end zone and Chris Olave, the wide receiver who had just gained 13 yards for the Buckeyes but had been just short of the first-down marker.

Incomplete. Turned over on downs.

But Ohio State did not quite fade away. On its very next offensive snap, after an Oregon drive that concluded with a punt, Stroud summoned a 29-yard pass to Jaxon Smith-Njigba. About two minutes later, the Buckeyes were in the end zone and within a touchdown of the Ducks.

The end might have come with less than three minutes to go, when Stroud, with Ohio State on the verge of Oregon territory, threw an interception that set up 150 seconds of clock erosion by the Ducks.

But it came, at last, with about seven seconds to play.

Armed with a first down, and trailing by a mere touchdown at one of the finest home-field advantages in college football, Stroud took a snap from his own 23-yard line.

DJ Johnson plowed toward him, having torn through the line.

Stroud crumpled to the ground, a 12-yard loss with a playoff quest in doubt.

By then, George Kliavkoff, the newly installed Pac-12 commissioner and one of the architects of a vaguely defined scheduling partnership with the Big Ten and Atlantic Coast Conferences, had marched through the press box.

“Enjoying the alliance so far?”