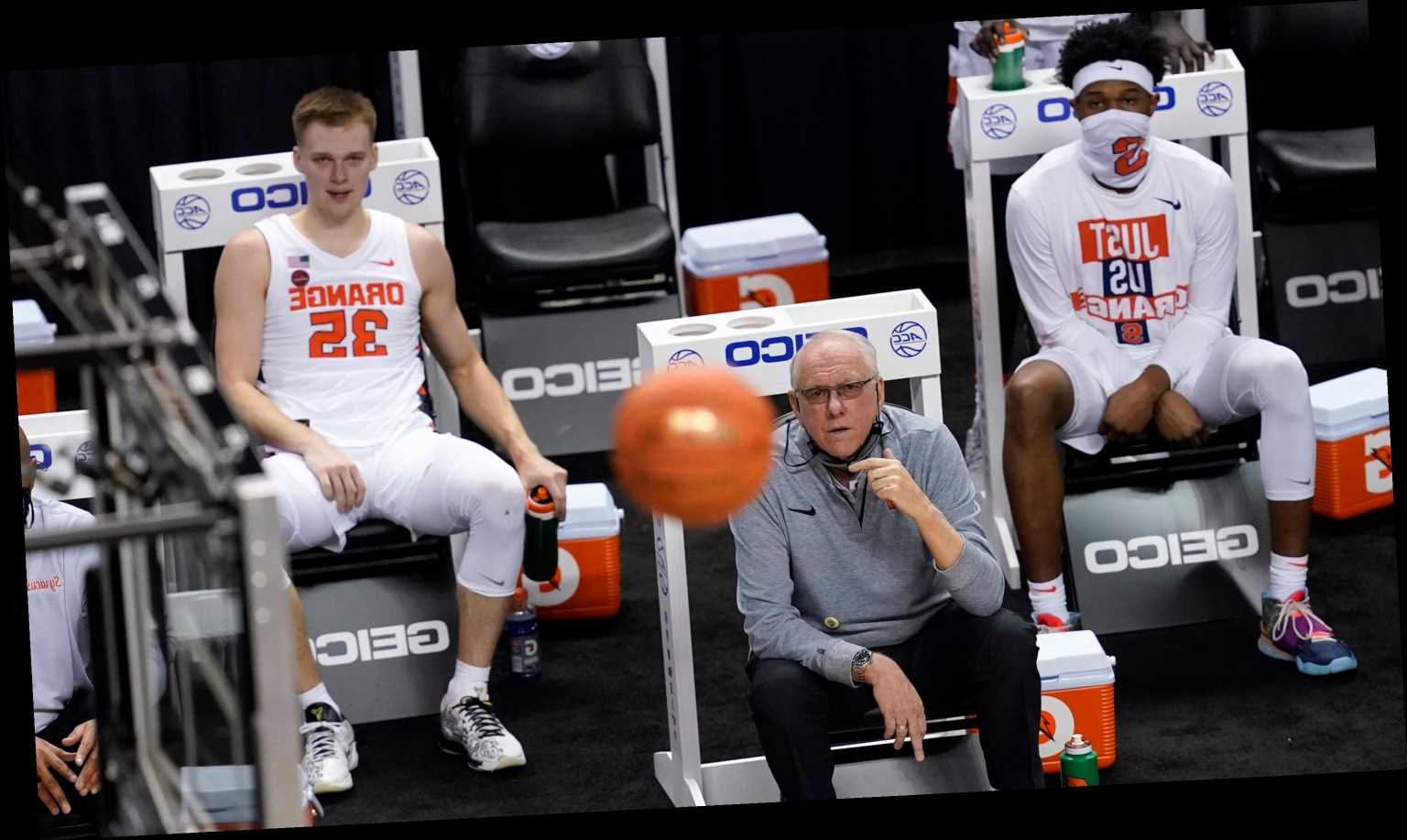 Jim Boeheim is not, as anyone who has paid even the slightest attention to men’s college basketball in the past four decades knows, warm and fuzzy. He is grouchy and curt and, when he’s particularly aggrieved, can be downright surly.

Which helps explain the heightened interest for Syracuse’s current run in the NCAA men’s tournament.

The star of Syracuse’s team, the player whose hot hand is Steph Curry-esque, is Buddy Boeheim. Yes, THAT Boeheim. Jim Boeheim’s younger son.

“It’s definitely been a lot, a lot of media, a lot of stuff about my Dad,” Buddy said Wednesday. “Obviously, that’s a factor in it.”

Stories about elite-level athletes who play for their parents are always captivating. Where does Mom or Dad end and coach begins? Does a team’s success mean more for the parent and child? If a team struggles, what effect does that have on the family dynamic?

Jim, center, and Buddy Boeheim are enjoying Syracuse's run to the Sweet 16, even if they don't show it very often. (Photo: Gerry Broome, AP)

But the Boeheims are particularly fascinating because it provides a glimpse of the elder Boeheim that is rarely seen. One he is trying – not always successfully – to downplay.

“He’s, I just don’t, I guess I’m not caught up in that much,” the elder Boeheim said Wednesday, looking visibly uncomfortable as he tried to answer what it means to make the Sweet 16 with his son. “I’m more concerned with the team and what we’re doing, thinking about how we’re approaching games.”

Jim Boeheim allowed that, as Buddy Boeheim’s Dad, he’s “really happy,” “because you want your son to play well and do well and he’s doing great.” Then he quickly reverted to the comfort of his role as Syracuse coach, praising his other players and voicing concern for the 11th-seeded Orange’s opponent Sunday, second-seeded Houston.

But try as Boeheim might to be dispassionate, there are times he simply cannot help himself.

NANCY ARMOUR: Syracuse in the zone and the Sweet Sixteen. It's the Jim Boeheim way.

After Syracuse upset third-seeded West Virginia on Monday behind Buddy Boeheim’s 25 points, all but 22 of which came in the second half and 18 of which came on 3-pointers, coach and player exchanged a high-five before father and son bear hugged.

And when he was asked after the game about Buddy’s development, Jim talked about the work his son had put in, working with Syracuse’s trainer throughout high school, shooting on his own in the family gym for several hours each night.

“I've had a lot of hard-working players, I really have. I mean, a lot of guys that just worked their tail off,” Boeheim said. “(Buddy) works harder than anybody that I've ever coached, and it's not close. It really is not close. He's just an incredible hard worker, and he deserves this.”

Boeheim has been Syracuse’s coach for 45 years, taking the Orange to five Final Fours and winning the national title in 2003. That kind of success allows him a lot of latitude with his program, but he would not offer his son a scholarship if he wouldn’t have been worthy of it with a different last name. He doesn’t do warm and fuzzy, remember?

But it is clear father and son are reveling in their time together. Jim Boeheim’s plans to retire in 2018 have come and gone, and he no longer puts an expiration date on his career. In a joint interview this week with the Dan Patrick Show, Buddy Boeheim called the tournament run a “great moment, something I’ll remember forever.”

No doubt there have been challenges. Buddy has said the first time coach Boeheim yelled at him was awkward, but he quickly got used to it. Now, the bigger irritation is when one of his teammates is getting an earful.

“He does look at me if I get on somebody,” Jim Boeheim said. “Which is good. He’s supposed to support his teammates more than me.”

And while Jim Boeheim long ago stopped caring about public perception, if he ever did, Buddy Boeheim didn’t take criticism of his father earlier this season quite so well.

“Just crazy stuff, how he's been not doing well the last 10 years. Do you know how many people would dream about going to two Sweet 16s, two Final Fours and an Elite Eight? In 10 years, that's pretty good,” Buddy said. “He's never had a losing season, and he continues to do it. He's one of the best coaches in college sports, no doubt about it.

“There's no one better, and he continues to prove that.”

While showing he's not quite as dour as he appears