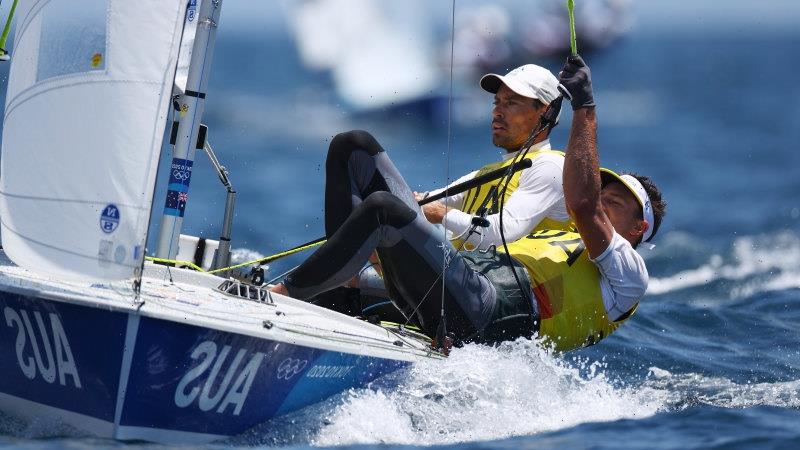 Australia has new gold-medalists-in-waiting with only a final-day catastrophe to deny sailors Mathew Belcher and Will Ryan victory in the men’s 470 class at Enoshima Harbour on Tuesday.

Just a couple of days after Matt Wearn was presented gold for winning the single-handed Laser division, Australia all but confirmed its second gold medal of the regatta with the ultra-consistent Belcher and Ryan poised to go one better than the silver they won in Rio.

The duo, campaigning together for the last time at Olympics level given their division will be mixed gender in Paris, recorded second and eighth finishes in the ninth and 10th race in their class, which were rescheduled after light winds forced a postponement on Monday.

It opened up a 20-point lead from Sweden’s Anton Dahlberg and Fredrik Bergstrom before Wednesday’s double points medal race, which is restricted to just 10 boats. Dahlberg and Bergstrom won the 10th event to ensure the gold medal is not officially yet in Australia’s keeping.

But only an absolute disaster in the medal event from the Australian duo – such as crossing the start line before the gun and being disqualified – can stop Belcher and Ryan being handed gold.

They are likely to stay well behind the fleet at the start and as long as they make a reasonable attempt to complete the race will be given the gold medal, regardless of their finishing position. 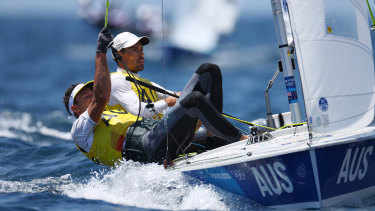 Mathew Belcher and Will Ryan are on the cusp of Australia’s second gold medal of the Olympics regatta.Credit:Getty

It will be Belcher’s second Olympic gold medal after he paired with Mal Page to win the division in London, and he’s the first Australian sailor to win medals at three successive Olympics.

Belcher and Ryan were the first athletes officially selected to the Australian Olympic team in 2019 before the COVID-19 pandemic gripped the globe and forced the Tokyo Games to be delayed by a year.

Never miss a medal or great sporting moment with our Olympic update emailed daily. Sign up for our Sport newsletter here.