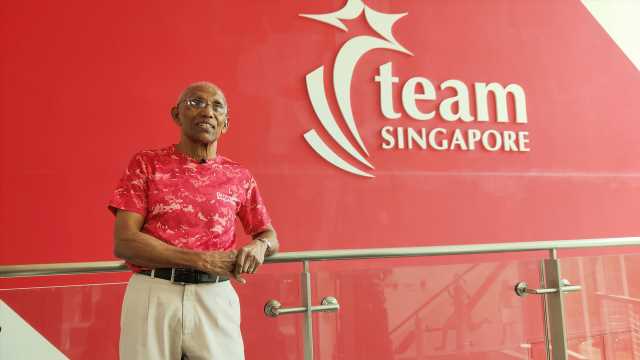 SINGAPORE – Singapore swimmer Bernard Chan was on the hunt for autographs at the 1964 Olympics when a sling bag containing his money and passport was stolen.

Then 18, he had been so intent on getting his kickboard autographed by “other accomplished swimmers” that he did not notice that it had been pinched by someone.

“They gave us a nice roll-up kickboard for swimmers. We used wooden planks for kickboards back home,” the 74-year-old old told The Straits Times. “I was chasing (after) the autographs and I left my bag (behind). When I came back, it was gone.

“I reported it to my coach and security, and they looked absolutely sorry, bowing and all, while my coach was saying, ‘Don’t apologise. It’s his (Bernard’s) fault!'”

The next morning, 10 security guards showed up outside his room and returned his bag and passport but his money was gone.

“They gave me a very nice letter in English apologising for the security error, and I was very touched,” he said.

“Apparently they felt so bad about me losing my money, they collected (money) among themselves and gave me the exact amount that I had lost. I was in awe of their commitment to service and wrote them a thank-you letter.”

Sprinter C. Kunalan, who raced in the 4x100m relay in Tokyo, also had a first-hand taste of Japan’s top-notch hospitality.

One day, some Japanese boys who worked in one of the dining halls invited him for a one-night home stay and took him sightseeing in their city.

“I saw them quite frequently, so we became friends and they made arrangements for me to go and stay with them,” the 78-year-old recalled. “It was a Japanese home with the sliding bamboo doors and a low table for us to have meals. I slept on a mat on the floor.

“This was an eye-opener, it was like, ‘Hey look, this is different.’ It never sank in at that time that I had gone through this experience.”

As the Japanese capital gears up for the July 23-Aug 8 Olympics, the first time the quadrennial event is being held in Tokyo since 1964, it will be a completely different experience for athletes with the coronavirus in play. Spectators have been barred from the Games and athletes will be subject to strict Covid-19 rules to prevent the spread of Covid-19 both among themselves as well as the Japanese population.

Former cyclist Hamid Supa’at, who was also at the Tokyo Games, feels the Class of 2021 will be the poorer for it.

The 77-year-old said: “It’s like a concert with no audience. The cheers of the crowd make you more motivated. Like in cycling, when you reach a small town and there are crowds of people cheering for you, you get more energetic.

“As an athlete, you have to mingle with athletes from other countries and talk about your sport and experience. Now they won’t have that exchange of knowledge and information.”

It was such an exchange that helped Hamid start the 190km individual road race.

“The weather was very cold. My nose was red and my throat was very dry and I could not grip my handle bars properly,” he said. “Some European riders told me to put old newspapers in my jersey, especially at the chest area, to be more comfortable.”

But it was still too cold for him and he retired after about half the race.

Boxer Krishnan Gopalan, 80, was also struck by the compassion of his fellow athletes in Tokyo. He witnessed a fight in which one boxer was knocked unconscious and his opponent then knelt down and said a prayer for him.

He added: “I’ll never forget that because I had never seen that in boxing. I took it in my stride and thought this was part and parcel of boxing, that you want to win but, of course, not at the cost of someone else’s life.”

As Singapore was part of the Malaysian contingent in 1964, swimmer Michael Eu recalls wearing a songkok, a dark-blue blazer and grey trousers during the opening ceremony at Kasumigaoka National Stadium. It was the first and only Olympic Games where Singapore competed as part of Malaysia.

Eu, now 74, said: “The opening ceremony was quite exciting, there were lots of people from all over the world and it was overwhelming with so many people in the stands… You’re beaming with pride and feeling like this is something special that you don’t do every day, representing your country.”

But as spectators go, few impressed hockey player Douglas Nonis, then 27, more than that at the hockey stadium, where a section of the crowd was full of students.

He said: “Injecting this game of hockey into children from a young age is good and I hardly see that in Singapore. That impressed me quite a bit. It’s good to get youngsters involved, especially when there’s a big game.”

For Chan, the Olympics represent the essence of sport, and not just because of the standard of competition.

“When you go into the Games’ opening ceremony, you go in your contingents. By the time we went out for the closing ceremony, there were no more contingents. Everyone was friends, arms over shoulders, all having a good time,” he explained.

“I made a lot more friends than I started off with. That kind of essence of sports should never be lost. We competed like hell, but we made friends and stayed friends.”