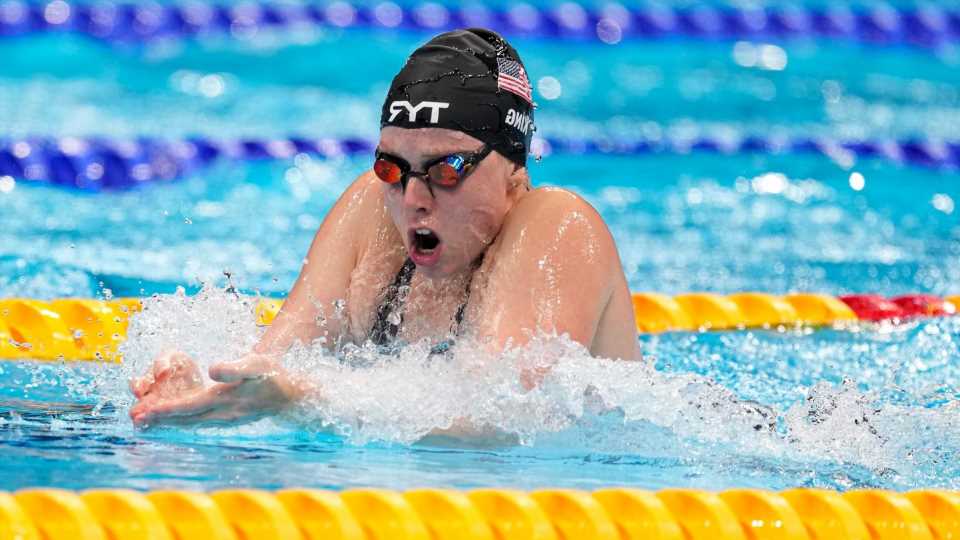 The U.S. is well-positioned to have a promising day in the pool at the Tokyo Aquatics Centre.

The Americans have swimmers in each of Thursday’s four final races, and in three of those events a U.S. swimmer qualified in the top four.

Annie Lazor and Lilly King will compete as the third and fifth seeds, respectively, in the women’s 200-meter breaststroke against Olympic record-holder Tatjana Schoenmaker of South Africa and Russian Evgeniia Chikunova.

Abbey Weitzeil and Canadian Penny Oleksiak will race in a highly competitive women’s 100 freestyle that had all but one qualifier finish with a time below 53 seconds in the semifinals. Australian Emma McKeon, who swam the distance in 52.32 seconds in the semis, set the Olympic record with a 52.13 in her prelim race.

The last final of the night will be the men’s 200 individual medley, where American Michael Andrew will attempt to medal after qualifying fourth in the semifinals with a time of 1:57.08. The top qualifier, China’s Wang Shun, swam his semifinal in 1:56.22.

Also Thursday, U.S. gold medalist Caeleb Dressel will race in the men’s 100 butterfly semifinal — an event in which he holds the world record — and Americans Rhyan White and Phoebe Bacon will race for the top spot in the women’s 200 backstroke final against Canadian swimmer Kylie Masse and Australian Kaylee McKeown.

Sporting News will be providing live updates and highlights from each event during the sixth day of Olympic swimming finals.

9:48 p.m.: That record by Schoenmaker is the first individual world record set during the 2021 Olympics. Both the women’s 4×100 and 4×200 freestyle relays were world records.

9:44 p.m.: Lilly King is the first off the blocks with a reaction time of 0.65, but South African favorite Tatjana Schoenmaker is off at 0.66.

9:39 p.m.: That Olympic record didn’t last long. Dressel sets the new mark at 49.71, with Switzerland’s Noe Ponti second at 50.76 and Poland’s Jakub Majerski third at 51.24. American Tom Shields will miss the final after finishing eighth in the heat at 51.99.

9:33 p.m.: ROC’s Andrei Minakov and France’s Mehdy Metella are tied for first after the first 50 and Milak is in third.

With the exception of July 31, each day will begin with heats starting at 6 a.m. ET and will end with finals races starting up at 9:30 p.m. ET each day. The USA Network will carry the heats in the United States and NBC will have the finals, while CBC will provide coverage of both events in Canada.

Those in the United States hoping to see replays of the qualifying heats can tune into NBC every afternoon to see how swimmers performed earlier in the morning.