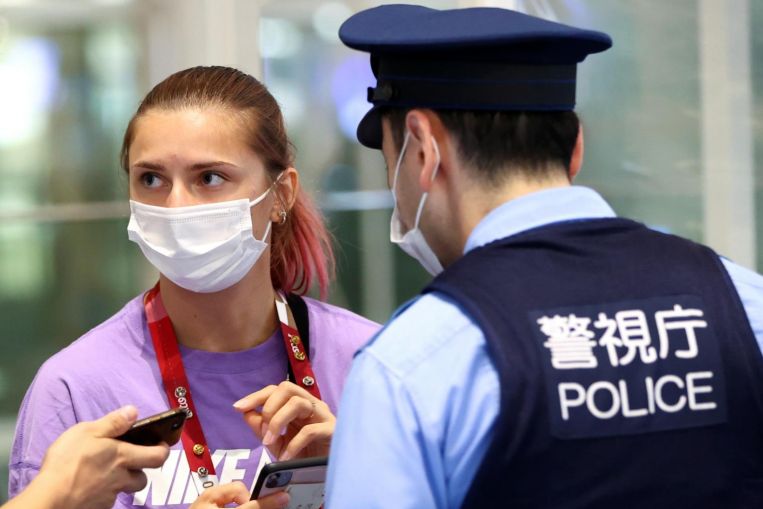 TOKYO (Bloomberg) – A Belarusian sprinter reportedly pressured to leave Tokyo halfway through the games for criticising sporting officials from her country is safe after spending the night at an airport hotel in the city, according to the International Olympic Committee (IOC).

The IOC and Tokyo 2020 officials will continue their conversations with authorities and the 24-year-old runner, Krystsina Tsimanouskaya, “to determine the next steps in the upcoming days,” the IOC said in a tweet Monday (Aug 2).

The Japanese government is also working with the relevant bodies to tackle the issue, top spokesman Katsunobu Kato said.

“She has told us that she feels safe,” the IOC said on Twitter. The committee has also asked the Belarusian Olympic Committee for a full written report on the issue, after being informed Tsimanouskaya had sought protection at the airport, spokesman Mark Adams told reporters in Tokyo.

Tsimanouskaya had refused to get on a flight from the Japanese capital after being taken to the airport against her wishes and was seeking asylum in another country, Reuters reported earlier.

The runner had criticised the Belarusian Olympic Committee on social media, saying coaches had suddenly told her to take part in a relay race for which she had not trained because other athletes had failed to complete the requisite number of doping tests, Reuters said.

A group of 16 athletes from Belarus was set to leave Japan on Monday, the IOC’s Adams said, as part of a routine movement. Participants in the games are required to leave the country 48 hours after their final event under coronavirus precautions for the Olympics.

Tsimanouskaya ran in a women’s 100m qualifier on Friday and was scheduled to run Monday in a qualifying heat in the 200m, according to Tokyo Olympics data. She has also been listed as a member of the Belarusian women’s 4x100m relay team. Adams expressed regret that the sprinter had missed her event and said the IOC had a duty of care toward her.

For months, Belarus been the subject of an IOC investigation stemming from reports that President Alexander Lukashenko’s government has punished athletes who have spoken out against his rule or participated in protests.

The EU, the United States and other governments earlier this year imposed sanctions on Lukashenko’s government over its treatment of political opponents. These include a dissident journalist detained after the Ryanair flight he was travelling on was intercepted by Belarusian authorities in May.

In March, the IOC said it would not recognise Viktor Lukashenko, the son of President Lukashenko, as the head of its national organising committee, and would not invite any senior government official from Belarus to the Olympics. It also faulted the local committee for failing to address concerns that it “had not appropriately protected the Belarusian athletes from political discrimination.”

More than halfway through the Tokyo Games, Belarus had won two medals as of Monday afternoon after taking nine in Rio de Janeiro in 2016 and 10 in London in 2012.